Inside the Big Ten's two weeks of discontent: 'Everyone is furious' 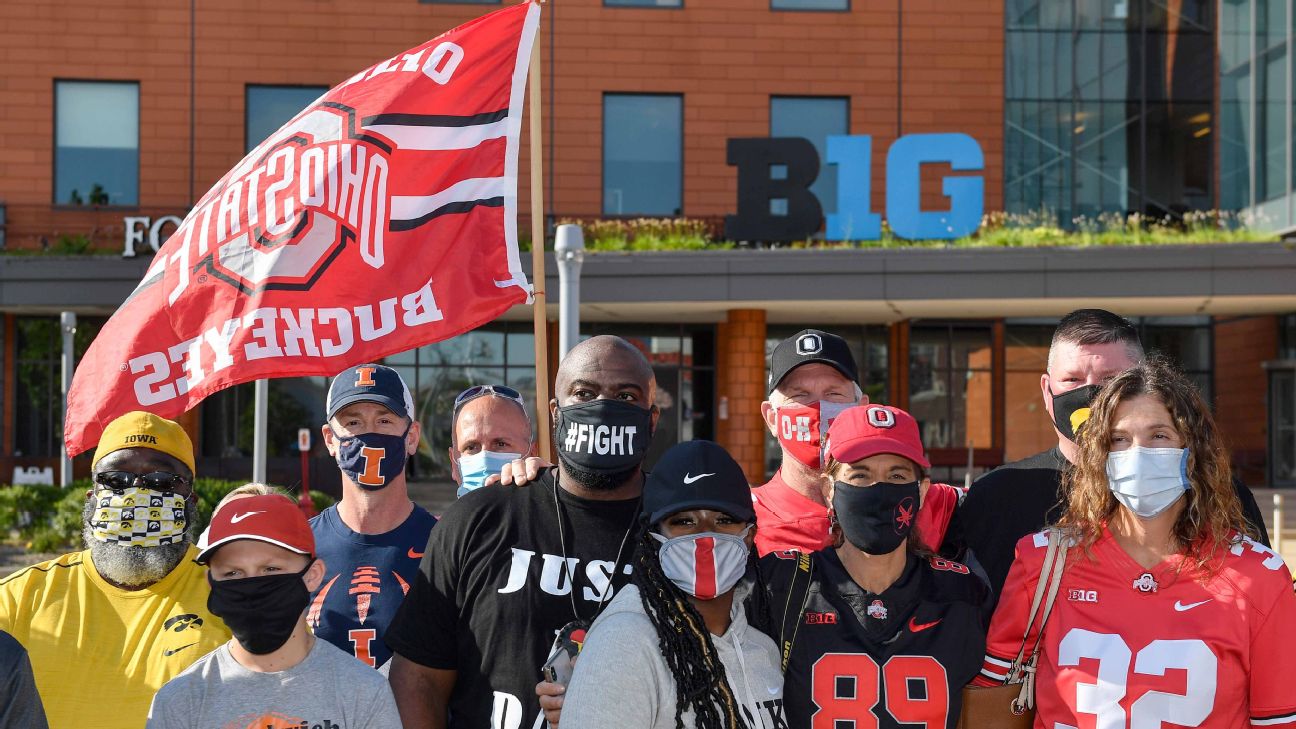 
"Wait, am I cheering for Wisconsin?" Gail Koerner said with a laugh.

Koerner, whose son, Jack, is a junior defensive back at Iowa, normally wouldn't dare cheer for the rival Badgers, but the parents' anger, frustration and confusion around the postponement of the football season has brought them together against a common opponent.

"We're all parents, we all have the same concerns," Gail Koerner told ESPN. "So I actually think it's really awesome to be with all these different parents. I started following a few people from Nebraska and Michigan, even parents who aren't here. [Ohio State coach] Ryan Day tweeted something, how proud he was of [quarterback] Justin Fields.

"I was like, you know, I hope my kid makes him sweat on the field, but off the field, we're all kind of in this together."

The parent protest punctuated two weeks of letters, petitions, remarks and general discontent about the Big Ten's decision. A group of Nebraska parents are also threatening legal action if the Big Ten doesn't produce documents relating to the Aug. 11 announcement, including the votes of each president and chancellor, as well as scientific data and medical information. Although three other FBS conferences and almost all of the lower-division leagues also have postponed for similar reasons, the Big Ten has drawn more public outcries, and Warren has been the primary focus of the criticism.

Parent complaints can be written off, especially after a small turnout Friday, but their concerns are shared by the majority of people inside Big Ten programs ESPN has interviewed during the past few weeks. That's a problem for Warren and the league, especially if the bad feelings continue to fester.

"Been in this league for 20-plus years," a league source told ESPN. "This has been embarrassing."

"Everyone is furious," added another source. "Not the way it has ever gone down. And the ramifications are staggering."

The public criticism is highly unusual for the 124-year-old conference, whose members pride themselves on unity and keeping disagreements in-house. Former commissioner Jim Delany, who stepped down Jan. 1 after 30 years leading the league, made pioneering and, at times, unpopular moves -- football division names "Legends" and "Leaders" flopped badly, and many people still aren't wild about expansion additions Maryland and Rutgers. Still, the Big Ten has rarely exposed such wounds publicly.


Why is the Big Ten taking so much heat for making a choice many would call sensible rather than shocking? The SEC parades the "it just means more" motto, but the Big Ten has large and passionate fan bases that care, fans who can go toe-to-toe with those in any other conference. The Big Ten also includes three of the sport's five largest stadiums (Michigan, Penn State and Ohio State, all over 100,000 capacity). Some athletic directors are projecting up to $100 million losses if football isn't played. Speaking a day after the postponement, Ohio State coach Day said, "As a coach, you work your whole life for an opportunity to coach a team like this. ... It could have been a once-in-a-lifetime team."

Still, a postponed or canceled season during the pandemic was always a possibility, and it remains possible for leagues such as the SEC, ACC and Big 12, which are all pushing toward fall kickoffs. Warren repeatedly and intentionally spoke cautiously about the fall, even when announcing the Big Ten's schedule Aug. 5.

Coaches, administrators, players and fans ESPN spoke with across the Big Ten are equally or more upset about the timing, process, rationale and lack of communication between the Aug. 5 schedule release and Aug. 9, when ESPN first reported that the large majority of Big Ten presidents favored postponement. They want to know whether there was a formal vote on Aug. 11 and how each school sided; they want to know the specific reasons for postponement, and whether Warren pushed presidents to pull the plug so early, as many around the league claim, or whether those leaders were ready on their own; and they want to know what's next for a potential winter or spring season.

The Big Ten and Pac-12 announced postponements on the same day, but the Pac-12 has not received as much blowback. The Pac-12 held a call with its football coaches the night before the postponement vote; the Big Ten's last call with coaches before postponement was announced took place shortly after the schedule release, sources said. The Pac-12 also included a 12-page document outlining its updated medical information and recommendations when announcing fall sports would be postponed; the Big Ten has yet to provide a similar document. Oregon president Michael Schill and Oregon State sports medicine lead Dr. Doug Aukerman were also made available to the media on Aug. 11; no members of the Big Ten's infectious diseases task force or sports medicine committee, two groups Warren relied on to advise the presidents, have spoken publicly since the postponement.

"Transparency means that they talk you through the process," Jay Kallenberger, father of Iowa offensive linemanMark Kallenberger, said at Friday's protest. "Don't put people in the dark, and let us know exactly what the thought processes were going into it. Nobody's going to argue that this isn't a real virus. We all get that, we all understand. But why is it we can go from having a schedule put out to, six days later, having a hard shutdown?"

The parents aren't the only ones asking questions and demanding information. On Wednesday, Penn State coach James Franklin said, "I'm extremely frustrated because we have very few answers to communicate to our young men." Two days earlier, Penn State athletic director Sandy Barbour said she wasn't sure whether the Big Ten presidents and chancellors had held a formal vote about postponement. (Warren later said they did, although presidents who spoke were more evasive when asked about the vote.)

Many things in the sports world and elsewhere are "off" right now. Warren, who spent most of his career as an NFL executive, faced the impact of the pandemic just months into his Big Ten tenure. Delany often talked about the communication missteps he made around a major Big Ten move just months into his tenure, the addition of Penn State into the league in June 1990. Should Warren receive a bit more leeway?

He certainly could have used more support for the postponement decision from those who actually made it, the presidents and chancellors who hired him. Warren was a surprising choice to succeed Delany, but he brought a unique background from the pro ranks and a refreshing focus on the athlete experience. Big Ten presidents barely said anything immediately after the postponement, even though some, including Michigan State's Samuel Stanley and Michigan's Mark Schlissel, are medical doctors with expertise in infectious diseases. Although the decision to postpone wasn't unanimous, there was a clear majority, league sources told ESPN.

"If Illinois' chancellor said no, I want to know why," Brad Beetham, father of Illinois quarterback Josh Beetham, said Friday. "He owes that to all the athletes and the town of Champaign itself, because of the dollars that are not going to flow there. Why did he say no? Don't base it on bad science."


Like every commissioner, Warren ultimately has to please the league's presidents and chancellors, his primary stakeholders. But Warren faces obstacles with other groups, many of whom believe he pushed postponement and did so hastily, without allowing programs to begin contact practices or see how students' return to campus would affect the schools' abilities to manage the virus. On Aug. 10, several Big Ten coaches made public pleas to Warren and the league to wait longer and employ a schedule model built on flexibility. About half of the league's programs paused summer workouts at one point, but many coaches and administrators felt confident about their ability to limit outbreaks with testing and other measures.

"These kids basically self-quarantined for three months," Kyle Borland, father of Ohio State linebacker and co-captainTuf Borland, and a former linebacker at Wisconsin, told ESPN. "They did everything the NCAA asked them to do, everything Ohio State asked them to do, for a chance to play the season. Maybe it works, maybe it doesn't. Then to have it pulled out at the eleventh hour is really disappointing."

When the Big Ten issued its news release Aug. 11, Warren spoke with select media outlets, including ESPN, but offered few specifics about what led to the postponement other than "uncertainty" and concerns about pandemic trends. Despite letters from football parent associations, a petition by Ohio State star quarterback Justin Fields that quickly eclipsed 200,000 signatures, and brief attempts by Nebraska and Ohio State to explore other competition options, the Big Ten remained silent for eight days.

Warren on Wednesday sent an open letter providing more details about what the league considered, including troubling trends of COVID-19 spread, contact tracing difficulties and concerns about having reliable rapid tests. He reiterated that the decision to postpone "will not be revisited." He also told several media outlets he could have handled the initial communications better. Beetham called the open letter "just a bunch of regurgitation and smoke-blowing," while other Big Ten parents at Friday's protest said their views would change if no one is playing college football this fall.

Wade is organizing another protest, set for this Saturday outside Ohio Stadium in Columbus, and isencouraging other Big Ten parent associations to do the same.

"I've got questions for days," said Maurice Goodson, father of Iowa running backTyler Goodson. "Even though [the Big Ten] said no, we're still hammering, man. We're putting a fire underneath them to bring that awareness, bring that visibility. Yeah, we know what you said, but we're going to try and pull out your future plans, where you're going from here. Just communicate. That's it. That's all you've got to do."

Although the league has yet to publicly discuss potential plans for a spring season, coaches such as Purdue's Jeff Brohm have been proactive in creating season models. Warren's open letter notes that the Big Ten has formed a return to competition task force, but it doesn't name who will serve in the group. In a statement after Warren's letter, Ohio State athletic director Gene Smith described postponement as a "temporary delay," adding that Ohio State is "actively planning for the winter and spring seasons for all sports, including the return of football."

If the Nebraska parents don't receive their requested documents, they could file suit against the league.

"One of the things my clients have said is if they're presented the exact same information that the presidents and chancellors were presented, they may change their mind, based upon the evidence," Michael Flood, the parents' attorney, told ESPN on Friday. "They want to see the medical and scientific data, the memorandums, who did they talk to, what were the exact recommendations, and they want to take that and look at the other three Power 5 conferences [SEC, ACC and Big 12] and say why does one shut down and the other three stay open? That baffles them. And they're entitled to know how people vote.