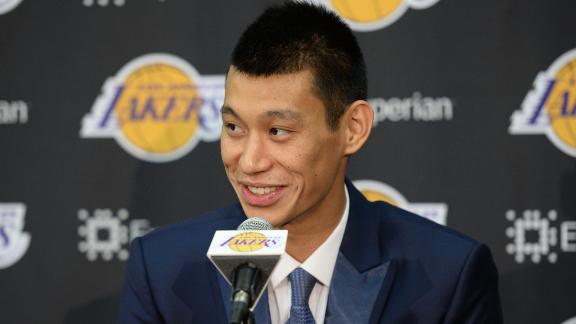 EL SEGUNDO, Calif. -- Jeremy Lin remains one of the most recognizable basketball players in the world, and he's joined perhaps the most popular global brand of any basketball team in the Los Angeles Lakers.

But it doesn't mean Lin is looking to use all that attention to replicate the same lightning-in-a-bottle situation he had when he burst onto the scene with the New York Knicks during the 2011-12 season.

The player Lin is today in some respects is even better than the one who dropped a career-high 38 points on the Lakers at Madison Square Garden in February 2012. Even though Lin lost his starting point guard role with the Houston Rockets to Patrick Beverley last season, he still shot career bests from the field (44.6 percent), from 3-point range (35.8 percent) and from the free throw line (82.3 percent). He also limited his turnovers to just 2.5 per game after averaging 3.6 with the Knicks.

"I think from the minute that I stepped into Houston until now, I'm definitely a much more complete player, and I learned how to do a lot of things that maybe I never had to do before, which was learning how to play off the ball, cutting and really challenging myself with some of the weaknesses that I've had to try to improve on," Lin said.

The Lakers traded the rights to Sergei Lishchuk along with cash considerations to the Rockets in exchange for Lin, a future first-round pick and a 2015 second-round pick. They used their cap space to absorb Lin's $15 million expiring contract for next season (although only $8.3 million of that deal counts against the cap).

It wasn't the first time L.A. tried to bring in Lin.

The Lakers were in negotiations with his representatives to bring him to training camp on a partially guaranteed deal after Lin went undrafted out of Harvard and had a strong summer league showing. Lin, who was born in nearby Torrance, California, but spent his youth growing up in Palo Alto, California, chose to sign with the Golden State Warriors, who had made a similar offer to the Lakers', to be closer to home.

After the Warriors cut him midway through his first season in the league, the Lakers again attempted to acquire Lin, only to have their waiver bid beat out by Houston, which had a worse record at the time.

"The first thing I said to him when he sat down was, 'You know, three times is a charm,'" Lakers general manager Mitch Kupchak said, recalling the conversation he and Lin had when the point guard came in for his physical with the team.

Lin, 25, could step right in as the Lakers' starting point guard.

Steve Nash's status remains unknown. The 40-year-old is coming off a season in which he played just 15 games because of persistent nerve root irritation in his back and hamstrings. The only other point guard on the current roster is second-round draft pick Jordan Clarkson, who played well in the Las Vegas Summer League but likely will need some development before being ready for the NBA.

"If you asked me, or I think if you asked any player, I think they'll believe that they're capable of starting," Lin said. "But I think if there's anything I've learned from this past year, it's really not that much about who starts. I think it's more about who finishes and how you play with the time that you're given."

Since the trade to the Lakers, the four-year veteran has kept busy with an Asian basketball tour overseas that was briefly interrupted so he could fly to Los Angeles and meet the Lakers before heading back to finish it. It allowed him to appreciate the strength of the Lakers' transcontinental appeal.

"It was just all red, Rockets [that the fans were wearing] and then the minute that I signed, came back, got my physical and went back to Asia, everything was [Lakers] yellow," Lin said. "It was like everybody was wearing only yellow ... I was like, 'Wow. That was fast.'"

He's also used the time to get in touch with Nash and Kobe Bryant.

"The one thing that he kind of just told me was, 'We have a lot of work to do,'" Lin said of his conversation with Bryant. "And I think that's 100 percent accurate. As long as we come in with that mindset of really having to work and understanding that we have to earn everything, I think we'll be OK."

While Lin characterized his opportunity in L.A. as "a new start, a fresh start," he couldn't escape questions about his past in Houston. When asked about the Rockets mocking up photos of Carmelo Anthony wearing his No. 7 uniform during their recruitment pitch, Lin said, "I did feel in some ways it could have been handled a little differently, but I wasn't outraged by it in any way."

(Lin will wear No. 17 with the Lakers because Xavier Henry already has No. 7. Lin previously donned No. 17 in New York and in the D-League with the Reno Bighorns.)

When asked about James Harden calling himself and Dwight Howard the "cornerstones" of the Rockets and failing to acknowledge Lin, he said with a shrug, "It didn't affect me at all. I agree with his statements. Those two are the cornerstones."

Things might not have been all sunny for Lin in Houston, however.

When asked about the prospect of playing alongside Bryant, Lin listed Anthony, Harden and Bryant as great players he'd get to team up with in his career, curiously omitting Howard from the group. Maybe a "more mature" Lin, as he calls himself, will indeed grow to become one of those cornerstones in L.A.

"I'm not trying to be a player from the past," Lin said. "I'm trying to make history again. It's not so much about me trying to be something that happened beforehand, and now I'm looking to the future and trying to be a much bigger and better player than I was ever before.

"To be honest, I feel the least amount of pressure on my shoulders now than I ever have."