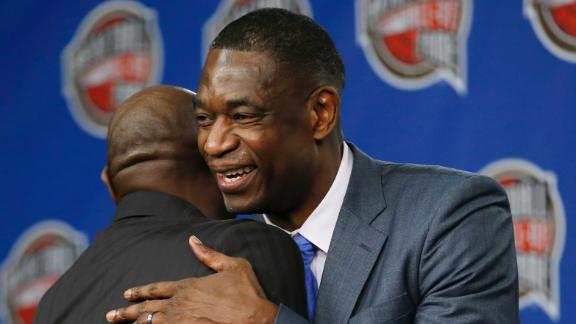 NEW YORK --Kentuckycoach John Calipari and four-time NBA Defensive Player of the Year Dikembe Mutombo are among a group of 12 finalists for the 2015 Basketball Hall of Fame Class.

The Hall of Fame announced its 2015 nominees Saturday at Madison Square Garden, the site of the NBA All-Star Game. The Class of 2015 will be announced April 6.

Calipari, who also had successful coaching stints at UMass and Memphis, guided Kentucky to the NCAA championship in 2012. His teams have reached the Final Four five times.

"I'm at a loss for words," Calipari said. "I want to thank the Naismith Memorial Basketball Hall of Fame committee for even considering me. The process is by no means over -- I'm just a finalist at this point -- but to even be mentioned as a finalist among these worthy candidates is an unbelievable honor. I am absolutely humbled by this.

Mutombo, an eight-time All-Star and native of Zaire, was overwhelmed to be among the group of finalists.

"Being from Africa, who would have ever though that my name would have been called to the Basketball Hall of Fame?" Mutombo said. "I never dreamed of playing basketball to reach this level."

Johnson, a 12-year NBA veteran and the current mayor of Sacramento, was also surprised to be among the group of finalists.

"You look up there at some of the players and you don't deserve to be in that category," Johnson said. "These are people who, I had their pictures on my walls growing up. Having a chance to stand with them is remarkable."

Ryan has been Wisconsin's coach since 2001 and guided the Badgers to a Final Four appearance last season.

"I'm extremely humbled and honored just to be mentioned with the other names on the nominee list," Ryan said. "The Hall of Fame holds so many revered legends of basketball and many of the individuals who originally sparked my love for the game.

"When I first planted my coaching roots years ago at the junior high level, I did so to be a teacher and help kids like my father did so selflessly. I never had intentions or even thought of being on Hall of Fame lists, but it's quite an honor and I'm grateful to all of the players and coaches who have helped along the way."

In addition to the nominees, the Hall of Fame announced that NBA executive Rod Thorn will receive the John W. Bunn lifetime achievement award. Photographer Rich Clarkson and University of North Carolina broadcaster Woody Durham were named as recipients of the Hall of Fame's Curt Gowdy Award.