John Calipari has ties to Nets, but no indication there's a match 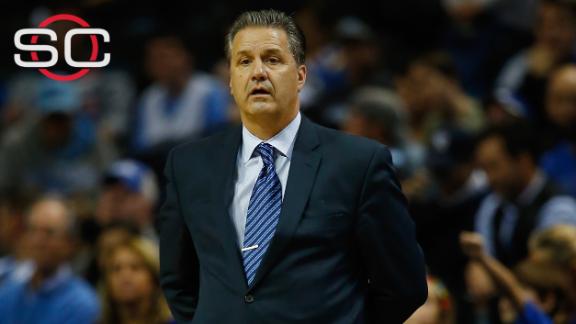 For weeks before the ax fell on Brooklyn Nets general manager Billy Kingand coach Lionel Hollins, there had been positioning and posturing going on behind the scenes as replacement scenarios lined up.

Quietly, members of owner Mikhail Prokhorov's inner circle have reached out to possible general manager candidates to gauge their interest and seek insight on how the Nets might pry themselves out of a brutal situation they find themselves in, sources told ESPN.com.

Meanwhile, on a completely separate tack, Kentucky coach John Calipari's emissaries have been putting out the word that if he were ever going to leave Lexington, it would take certain historic conditions, sources said. He would require total control as coach and team president as well as an astronomical guaranteed cash figure, they said.

Wes Wesley, Calipari's coaching agent, has told plenty in power across the NBA that it would take an offer of no less than "$120 million guaranteed" to get Calipari's interest, sources said. It has not been clear how many years that would entail or whether it would require him to coach for the entire contract. One of Calipari's perceived selling points, sources said, is the horde of former Kentucky stars who are scheduled to become free agents over the next three to four years whom Calipari could recruit again to a new NBA home.

Nonetheless, as the smoke clears on the Nets' housecleaning and Calipari's name continues to naturally be connected, it is important to understand that there are two tracks to the story.

Those who have spoken to the Nets recently believe the search for replacements will be led by Dmitry Razumov, Prokhorov's right-hand man, and Irina Pavlova, who runs the U.S. wing of Prokhorov's investment vehicle. It was Razumov, for example, who was the driving force in hiring Jason Kidd in 2013.

On Sunday, The New York Times quoted NBA commissioner Adam Silver as saying that "Prokhorov and his partner, Dmitry Razumov, have told me they intend to be more involved in the management of the franchise throughout the transition and moving forward."

Last month, Prokhorov completed a purchase of outstanding shares of the Nets and Barclays Center to make him the sole owner of both entities.

There is also a growing belief within the league that Prokhorov is leaning more on Sergey Kushchenko, a legend of Russian sports. Prokhorov relied on Kushchenko to be the president of Russian basketball power CSKA when he owned that franchise and more recently tapped him to run the Russian biathlon team, a passion for Prokhorov leading into the Sochi Olympics.

The point is that Nets CEO Brett Yormark, who is one of Calipari's closest friends, is not currently seen as a major driving force in deciding on the new leadership of the Nets. Yormark leads the Nets' business operation, and he has done deals with Calipari in this capacity. Kentucky played at Barclays Center as part of an event last month, and there's another deal in place for the Wildcats to play in the newly renovated Nassau Coliseum, owned by Prokhorov and operated by Yormark, next fall.

During the season, NBA executives and scouts regularly stream through Lexington to evaluate the horde of prospects Calipari always has on his roster. Rarely is there a practice where some NBA employee is not watching and taking notes. Calipari has befriended many and spends plenty of time meeting and eating with his visitors. They regularly take his temperature on his future and report back. There aresometimes flare-ups of rumors, depending on Calipari's mood on any day.

Of course, none of this is new. Calipari has turned down coaching and president jobs in Cleveland and Sacramento over the past two years and perhaps others that have not become public.

It is one of the reasons Calipari gets contract extensions roughly every year. His most recent, signed this past spring, runs through 2022 and is worth $54 million before bonuses.

It is also a reason the slow dance with the NBA, whether with the Nets or another team, likely will continue. Right now, however, many who work in the league believe there is more smoke than fire.