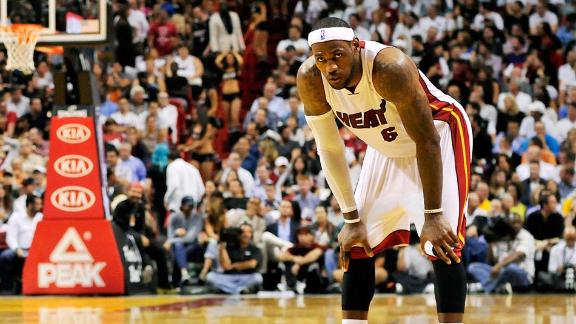 The NBA will announce Wednesday that LeBron James will play his first game in Miami since returning to the Cleveland Cavaliers on Christmas Day, according to sources briefed on the league's new schedule.

Sources told ESPN.com Tuesday that the NBA's 2014-15 schedule -- which will be released in full Wednesday at 6 p.m. ET in an NBA TV special -- predictably sends James back to South Beach to face Dwyane Wade, Chris Bosh and the rest of the Miami Heat on the marquee date of the league's regular-season calendar after James' decision last month to re-sign with his home-state Cavaliers.

The Los Angeles Times reported earlier this week that the L.A. Clippers and Golden State Warriors also will square off in one of the league's Christmas Day games in a renewal of the growing rivalry between the Pacific Division clubs.

Due to some last-minute shuffling, sources said, exactly when and where James will launch his second stint as a Cavalier is still being finalized. But sources insist that it will not be in San Antonio, though there was considerable speculation in recent weeks that Cleveland would open the season against the NBA's reigning champion.

"Ring Night" for the Spurs, sources said, is tentatively scheduled for Oct. 28 at home against the Dallas Mavericks, San Antonio's opponent for seven games in the first round of this past season's playoffs.