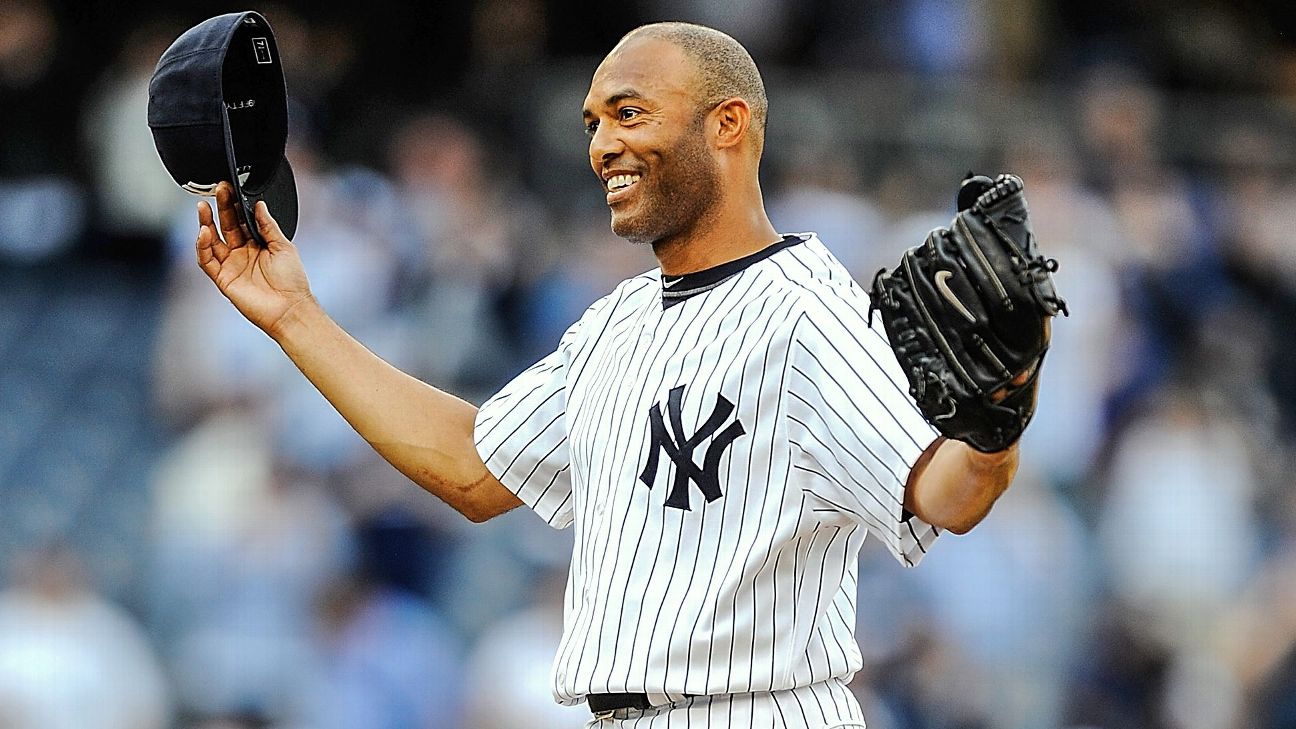 Closer Mariano Rivera, designated hitter Edgar Martinez and starting pitchers Roy Halladay and Mike Mussina will be the newest members of the Baseball Hall of Fame. Rivera became the first player to be unanimously voted into the Hall, appearing on all 425 ballots.

The four were voted in by the Baseball Writers' Association of America on Tuesday. Of the four, Halladay and Mussina were first-round draft picks, though only Mussina was touted for stardom from the start of his career.

Before Rivera, the highest vote percentage to gain Hall entry belonged to Ken Griffey Jr. in 2016, when he received 99.3 percent (named on 437 of 440 ballots).

"This was just beyond my imagination," Rivera said on a conference call with reporters. "Just to be considered a Hall of Famer is an honor, but to be unanimous is just amazing."

Martinez, in his final year on the ballot, received 85.4 percent, culminating a late surge of support; he received just 27 percent four years ago, when his election felt like a remote possibility. Halladay, who died in 2017 when the plane he was piloting crashed into the Gulf of Mexico off the Florida coast, also received 85.4 percent of the vote, joining Rivera as a first-ballot inductee. Mussina received 76.7 percent of the vote, clearing the 75 percent threshold by seven votes.

Curt Schilling received 60.9 percent of the votes, while Roger Clemens and Barry Bonds -- whose cases are muddied by steroid accusations -- continued to make small gains, up from 57.3 percent and 56.4 percent, respectively, in 2018 to 59.5 percent and 59.1 percent. They have three years remaining on the ballot. Fred McGriff made a leap on his final year on the ballot but fell short at 39.8 percent, and now he moves over to the Veterans Committee.

Rivera signed for $3,000, was left unprotected in the 1993 expansion draft and struggled in his initial big league trial as a starter. Now he is not only a Hall of Famer, but the first player the BBWAA ever has unanimously elected.

Martinez signed for $4,000, hit .173 in his first minor league season and didn't get the opportunity to become a full-time starter in the majors until he was 27. He is now a Hall of Famer.

The late Halladay was a first-round pick but was once so lost in the majors that he had to go all the way back down to Class A to rebuild himself as a pitcher. He is now a Hall of Famer.

Mussina was an 11th-round pick out of Montoursville, Pennsylvania, in 1987, but he went to Stanford University and then was a first-round pick of theBaltimore Oriolesin 1990.He is now a Hall of Famer.

Rivera, Martinez, Halladay and Mussina will join Lee Smith and Harold Baines -- who were selected in December by the Today's Game Era Committee -- in a unique Hall of Fame class: two closers, two designated hitters and two starting pitchers, including one with 203 wins, the fewest for a starting pitcher since the Veterans Committee elected Addie Joss in 1978 with 160 wins.

Rivera, the greatest closer of all time with a record 652 saves over his 19-year career, helped theNew York Yankeeswin five World Series titles, becoming one of the most iconic players in the storied history of the franchise. His postseason performance was even more remarkable than his regular-season dominance, finishing 8-1 with a 0.70 ERA over 96 appearances and 141 innings. He recorded 42 postseason saves -- including 14 of two innings. That's more two-inning saves than all other relievers combined in the postseason while Rivera was active.

Martinez spent his entire career with theMariners, staying in Seattle and becoming a franchise icon while other stars -- Griffey, Randy Johnson, Alex Rodriguez -- left. Martinez won two batting titles and hit .312 with 309 home runs over 18 seasons. He is one of just six players who began their careers after World War II and retired with a .300 batting average, .400 on-base percentage and .500 slugging percentage.

Halladay finished 203-105 in his career with a 3.38 ERA, playing 12 seasons with theToronto Blue Jays and the final four with the Philadelphia Phillies. He won two Cy Young Awards, one with each franchise, finished second two other times, threw a perfect game and tossed a no-hitter for the Phillies in the 2010 National League Division Series against theCincinnati Reds. He also was one of the last great workhorses. During his peak from 2003 to 2011, he threw 61 complete games -- 30 more than the No. 2 guy (CC Sabathia).

Mussina played 18 seasons, 10 with the Orioles and eight with the Yankees. He compiled a 270-153 record with a 3.68 ERA and 2,813 strikeouts. Mussina was a five-time All-Star and earned seven Gold Gloves. He never won a Cy Young Award, finishing second in 1999 behind theBoston Red Sox's Pedro Martinez.

More than anything, however, these four players are a testament to hard work and perseverance -- and even a little good fortune.

The Yankees left Rivera, then a Class A player who had suffered an elbow injury, exposed in the 1993 expansion draft. The Marlins were reportedly set to take him, but the Rockies selected Brad Ausmus, meaning the Yankees couldn't lose any more players. The Yankees also nearly traded Rivera to the Mariners after Rivera posted a 5.51 ERA as a rookie in 1995. Instead, theYankees moved him to the bullpen and one day in 1997, while playing catch with Ramiro Mendoza, his ball suddenly started moving. He had found his famous cutter.

"Mariano was a fierce competitor and a humble champion, which has made him such a beloved baseball legend," said Yankees managing partner Hal Steinbrenner. "Success and stardom never changed Mariano, and his respect for the game, the pinstripes and for his teammates and opponents alike makes this day such a celebration of his legacy. There will be many more great and talented relief pitchers, but there will never be another like him."

The Yankees didn't even wait until Rivera's final game to retire his No. 42 -- he was the last player in the major leagues to wear that number, grandfathered to him when No. 42 was retired in honor of Jackie Robinson in 1997.

"Wearing No. 42, representing Jackie Robinson, I assume he was the first No. 42 elected,'' Rivera said. "To be the last No. 42 elected to the Hall of Fame, and unanimously, is amazing.''

Martinez spent most of three seasons in Triple-A, hitting .344 over 276 games. The Mariners wouldn't give him a full-time job. When Darnell Coles made a bunch of errors at third base early in 1990, Martinez finally got the chance to play. Martinez hit .302 that season and never stopped, topping .300 10 times, in part because of his great eye at the plate, as he routinely finished with more walks than strikeouts.

Martinez and Baines will join 2014 inductee Frank Thomas as the only Hall of Famers to play the majority of their games at designated hitter. David Ortiz will be eligible in 2022.

"I think the fact that Harold Baines and me got in this year is going to help the future of the DH for years to come,'' Martinez said.

As for the wait, Martinez said it might have been a blessing.

"I think the wait, I think I'm more mature right now. I think I've enjoyed it more at this point with my family, the way my kids are older now and it just has a lot of meaning, even more meaning now,'' he said. "The wait, actually it worked out well for me.''

Halladay came up to Toronto as a prized prospect and had a 3.92 ERA as a rookie in 1999. Everything fell apart in 2000, however, and he had one of the worst seasons in major league history: 4-7 with a 10.64 ERA over 67 innings. The next season, he started back in the Florida State League, with the Blue Jays hoping Halladay could fix things enough just so they could trade him. They sent him to Double-A to work with pitching coach Mel Queen, and the two rebuilt his mechanics -- starting the first session by not even letting Halladay throw a baseball. Halladay was back in the big leagues in July, and he won his first Cy Young Award in 2003.

In a statement, Brandy Halladay, Roy's widow, said that making the Hall of Fame was never his goal.

"His goal was to be successful every single day of his 16-year career," she said. "Tonight's announcement is the end result of that effort.

"If only Roy were here to personally express his gratitude for this honor, what an even more amazing day this would be."

Braden Halladay, Roy's oldest son who has signed to pitch at Penn State, tweeted a tribute to his father.

The only other player elected on the first ballot posthumously was Christy Mathewson in 1936. Roberto Clemente was elected by a special election in 1973 after dying in a plane crash on Dec. 31, 1972.

"It's well-deserved," former Phillies teammate Cole Hamels said of Halladay on MLB Network. "Just to understand the character he really had and what he meant to baseball -- he was by far the greatest pitcher for 10 years."

Mussina received 20.3 percent of the votes in his first ballot in 2014, but he had steadily gained support since. Armed with a nasty knuckle curveball, Mussina also got a push from the sabermetric community.

The head boys' basketball coach at Montoursville High, Mussina had just finished practice when his phone rang with the news he had been voted in.

"There was a girls' game coming in after us with people coming in for that, so I had to go hide somewhere in the other end of the building so no one could see me," Mussina said on MLB Network.

Mussina's 3.68 ERA will be the third highest in Cooperstown behind Jack Morris (3.90) and Red Ruffing (3.80), but writers gave him a break for pitching in the slugger-heavy AL East, with its cozy ballparks.

"You know they're small or hitter-friendly, it's just how it was,'' Mussina said. "I just kept trying to make adjustments.''

Mussina fell short of 300 wins and 3,000 strikeouts, but those traditional markers haven't been as crucial to modern voters. This proved more relevant: His 83 wins above replacement, per Baseball-Reference, rank 58th all-time. That's just ahead of first-ballot Hall of Fame pitchers Nolan Ryan and Tom Glavine.

Asked if his plaque would depict him wearing an Orioles or Yankees hat, Mussina said he couldn't make that decision -- and the Hall of Fame has the final say in such matters.

"I wouldn't be on this phone call if it wasn't for both places," he said.

"I played for both organizations and was proud to play for both and there's no way I could pick one over the other."

Mussina knew the votes were tracking as if he would be selected, but he wasn't sure until receiving the phone call.

"It's surprising, somewhat. [The vote totals were] steadily improving, but it was a pretty big jump from last year to this year," Mussina said.

"I knew it was going to be close, but it's pretty cool."

Kurkjian: Rivera is 'the greatest closer of all time'
Tim Kurkjian breaks down Mariano Rivera becoming the first player to receive 100 percent of the votes into the Baseball Hall of Fame. 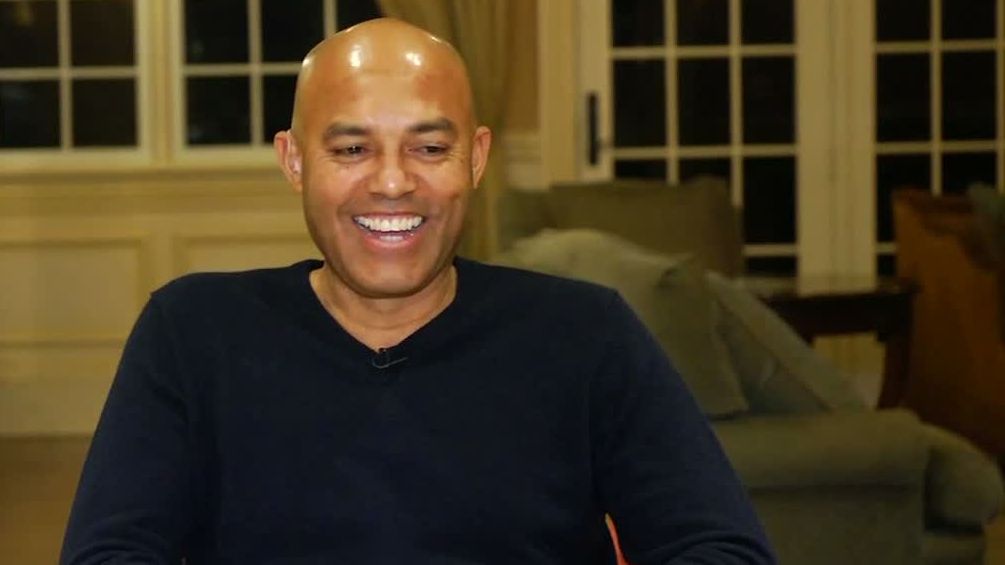 Rivera compares unanimous hall selection to World Series win
Mariano Rivera sits down with SVP to describe the feeling of finding out he was the first player unanimously elected to the Baseball Hall of Fame. 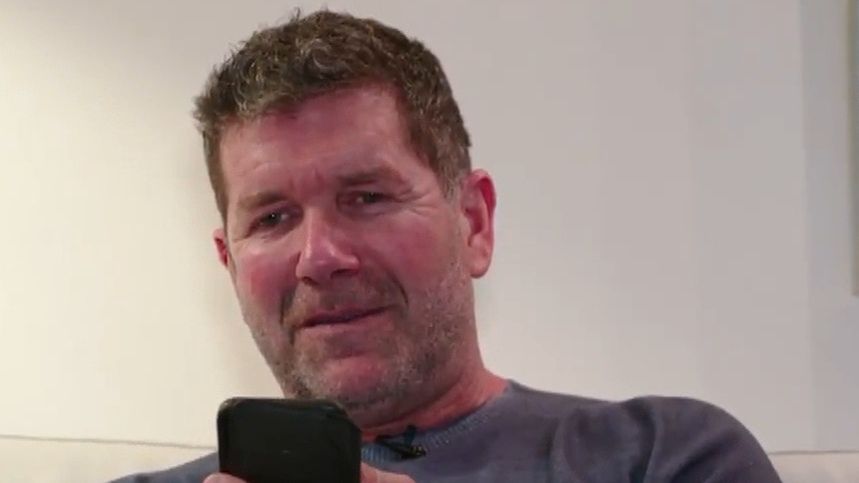