Marshawn Lynch a no-show at camp 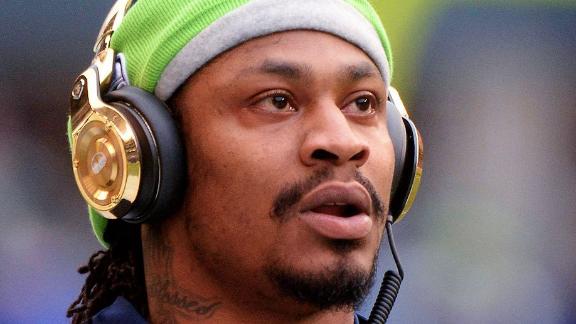 RENTON, Wash. -- As expected, Seattle Seahawks running back Marshawn Lynch did not attend the first day of training camp Friday, officially starting his holdout over changes he wants to his contract.

Lynch is in the third year of a four-year, $30 million deal. He received $6 million of it in a signing bonus. Lynch will make $5 million in base salary this season and $5.5 million in 2015, but he wants more money up front or more money guaranteed.

But the message was clear that Seattle put a plan in place before Lynch was signed to a four-year contract in 2012, and the Seahawks management is not inclined to stray from it.

"We've had a substantial plan working for us for years now and Marshawn was a big part of this plan. Just a couple of years back we made a big statement and made a big effort for him and we wish that he was with us now," coach Pete Carroll said.

"But this is a tremendous opportunity for the guys getting their shot. Robert Turbin and Christine Michael, they're ready to go and really fired up about this opportunity and are going to try and take full advantage of it."

Seattle general manager John Schneider talked about Lynch's situation Friday morning, but did not say whether the organization was willing to meet the running back's desire to restructure the final two years on his contract.

"Without being specific, obviously, we don't talk people's contracts," Schneider said on 710 ESPN Seattle radio. "We all love Marshawn, but he made a decision not to be here.

"The thing I would say, without getting into it too deep, is we've had a plan in place for several years. Just two years ago, Marshawn was one of the first guys we were able to reward."

Schneider was asked whether he would be comfortable starting the season with Michael and Turbin.

"It's a fair question," he said. "I think Lynch, obviously, is a heck of a running back. But just like last year with [cornerback] Brandon Browner, Byron Maxwell stepped up when he had to go. It's the environment here of the next man up. That's no disrespect to Marshawn. Everyone knows what he can do. I mean, the man caused an earthquake [the 2011 'Beast Quake' playoff TD against New Orleans]."

Schneider also was asked what he thought of second-year running back Michael.

"Christine has worked his tail off and took a big step forward in his work ethic and maturity level," Schneider said. "He's more focused than he has been."

Lynch showed up for the minicamp in June to avoid a hefty fine. But he finally decided to make a stand with the start of training camp.

"Everybody is calling him, but it's a business at the end of the day," Seattle defensive end Michael Bennett said. "... So all you can do is support him. You want him to be here, but as a player you understand the business side too."

Information from ESPN.com's Terry Blount and The Associated Pres was used in this report.