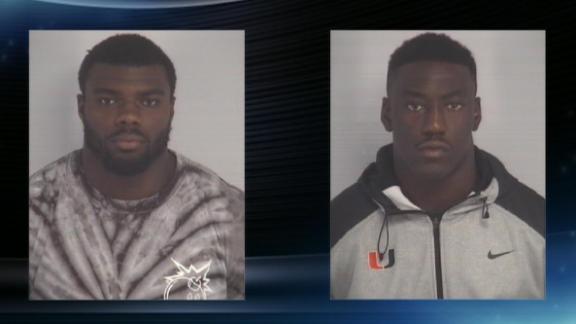 Two University of Miami football players arrested on sexual battery charges against a "physically helpless" 17-year-old girl were dismissed from the team and suspended Tuesday.

Court and jail records show JaWand Blue and Alexander Figueroa were booked on the charges Tuesday. Both are 20-year-old linebackers.

According to the police report, both players admitted to buying drinks for the accuser, bringing her back to Figueroa's dorm room in the early-morning hours of Saturday and repeatedly performing sexual acts, including intercourse, without her consent while she was intoxicated and "physically helpless to resist."

Both players face charges of sexual battery on a physically helpless victim and are being held on $10,000 bond, according to the Miami-Dade County records obtained by the Palm Beach Post.

Figueroa is additionally charged with possession of a stolen or forged driver's license.

No attorney was listed for either man. The Coral Gables police report said the accuser, a UM student, first reported the assault to university police, which turned to the Coral Gables department to investigate.

In a statement released Tuesday, Miami athletic director Blake James said the players had been dismissed from the team and suspended and barred from campus.

"Earlier today, I permanently dismissed JaWand Blue and Alexander Figueroa from the UM football team," James said in the statement. "The University has also suspended the students from school and barred them from all campus facilities while the University conducts an internal investigation and continues to cooperate with local law enforcement.

"Any allegation of a sexual assault is extremely serious, and the University will not tolerate conduct that threatens the sanctity and safety of our students and our campus. We hold all of our students -- especially student athletes -- to the highest standards of moral conduct."

Miami president Donna E. Shalala said in a statement that the university has "zero tolerance for sexual assault and gender-based violence" and has spoken to the accuser.

"There is no confusion about our responsibility as a university: We will fully and compassionately support the victim of sexual assault. I have spoken to her myself and reassured her of our full support," she said in her statement, adding that Miami has launched its own investigation into the incident and is cooperating with the police.

One of the biggest accomplishments Miami made on defense this past spring was building its depth. That, however, takes a hit with Figueroa and Blue gone.

Both played as true freshmen last year and were going to be counted on to improve a unit that has only one standout. Figueroa, who started two games in 2013 and finished with 17 tackles, was the favorite to win the starting strongside linebacker job. Senior Thurston Armbrister is expected to take that role now.

Blue was penciled in to back up middle linebacker Denzel Perryman, the best player on the defense.

ESPN.com's Andrea Adelson and The Associated Press contributed to this report.