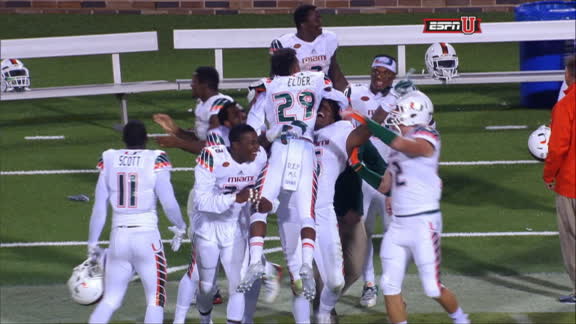 GREENSBORO, N.C. -- The Miami player who scored a touchdown on a wild final play that the Atlantic Coast Conference later said shouldn't have counted has earned a weekly award from the league.

The ACC on Monday announced returner Corn Elder as its specialist of the week as chosen by a 14-member media panel.

Elder took the last of eight laterals for the game-ending touchdown in Miami's 30-27 victory at Duke on Saturday.

The next day, the ACC suspended the officiating crew for two games for what it termed "a series of errors" -- most significantly, that another Miami returner's knee was down before he lateraled the ball -- that allowed the Hurricanes to score the winning TD.

The ACC said that should have been spotted during the review and would have ended the game if called.