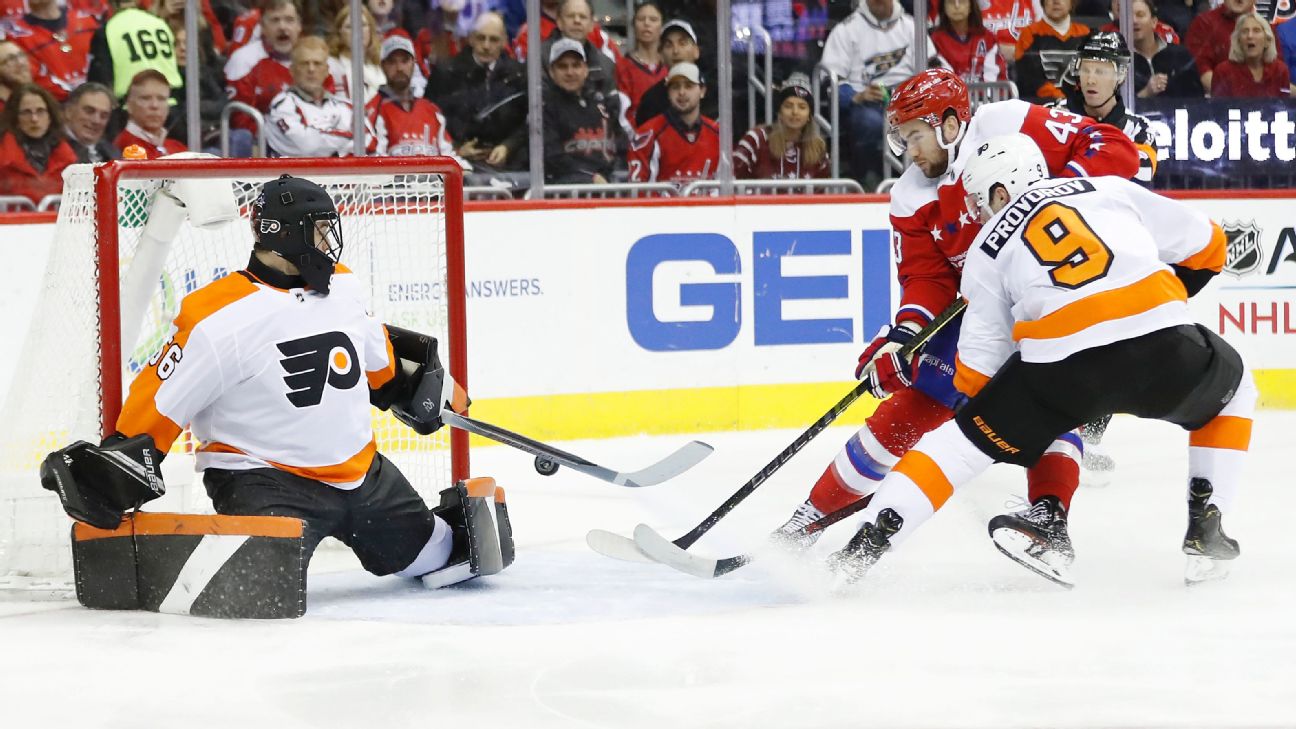 WASHINGTON -- The Philadelphia Flyers tied an NHL record with Mike McKenna becoming their seventh goaltender to play this season.

McKenna started against the defending Stanley Cup champion Washington Capitals on Tuesday night and allowed four goals on 25 shots in a 5-3 loss. He got the nod because interim coach Scott Gordon wanted to give top goaltending prospect Carter Hart a break after playing twice in three days.

Because of injuries, the Flyers reached the seven-goalie mark in their 43rd game.

Philadelphia claimed the 35-year-old McKenna off waivers from the Canucks last week when Neuvirth was injured again. Vancouver acquired McKenna in a trade from the Ottawa Senators two days earlier.

McKenna had black tape all over his mask and black and orange tape on his pads to match the colors of the ninth NHL team he has dressed for. In previous seasons, he played for the Tampa Bay Lightning, New Jersey Devils, Columbus Blue Jackets, Arizona Coyotes and Dallas Stars.

"He competes and he battles," Gordon said of McKenna. "When you play for as long as he has, that's something people appreciate, the fact that you bring it every day in practice and games."

McKenna fell to 1-5-1 this season, and his only victory came against the Flyers while playing for the Senators. He recognized his first game with Philadelphia wasn't his best.

"I'd be lying to you if I didn't say it was a little bit of a challenge just from a lot of different logistical standpoints, but my job is to play hockey and be a goaltender and stop the puck, and no matter what team I'm on I'm going to do that to the best of my ability," McKenna said. "At the end of the day, we're all trying to do the same thing and that's win hockey games regardless of who we're playing against. The NHL is a challenge no matter what. Every team has players that can do this, so you've got to bring your A-game."

Gordon, who replaced the fired Dave Hakstol behind Philadelphia's bench, was one of the Nordiques' seven goaltenders 29 years ago. He said this is different because Quebec was 9-34-6 at the time he was called up.

"The team at that point, there was a fire sale that was going to happen at the trade deadline," Gordon said. "They were out of the playoffs. Different situation. There were some major changes that were done at that point."