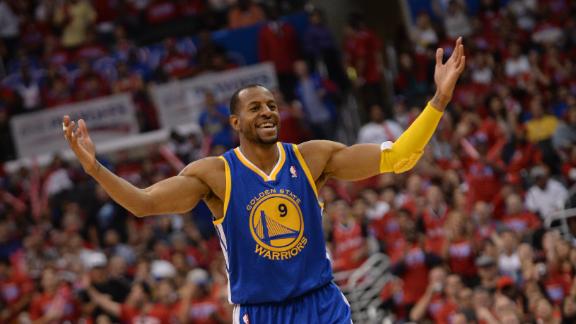 ESPN
By Arash Markazi
PLAYA VISTA, Calif. -- There were 51 fouls called during the Golden State Warriors' 109-105 win against the Los Angeles Clippers in the opening game of the first-round series on Saturday. But on Sunday, the NBA issued a statement admitting there should have been one more foul called.

With 18.9 seconds left in the game and the Clippers down 107-105, Clippers point guard Chris Paul was dribbling the ball above the arc when he was double-teamed by Steve Blake and Draymond Green. Paul then lost the ball after Green reached in and looked as if he had committed a foul.

The play was reviewed but since no foul was called on the floor, the only reviewable action was who touched the ball last, which was Paul. The Warriors would get the ball, hit two more free throws and go on to win the game.

"Under the existing rule, referees may only use instant replay to determine which player caused the ball to go out and a limited set of other reviewable matters," NBA president of basketball operations Rod Thorn said in a statement. "Just prior to the ball going out of bounds, Paul was fouled by Green and Paul should have been granted two free throws. Contact preceding out of bounds calls is not a reviewable matter."

Paul, who missed two free throws after the play and only hit three of his six free throws, didn't take any solace in the league statement before practice on Sunday.

"I missed some free throws," Paul said. "We still had opportunities to win. When the ball went out of bounds I knew it was off me but it felt like it was a foul."

Clippers coach Doc Rivers thought the pregame hype about the physicality of the series affected the officiating as Blake Griffin only played 19 minutes and fouled out in the fourth quarter. Paul also was playing with five fouls at the end of the game.

"I thought the game was called very close and unfortunately for us, our two best players were the ones that bared the brunt of that," Rivers said. "Chris was in foul trouble and Blake was in foul trouble. When Blake plays 19 minutes, that was not my game plan. I didn't have that in my notes. It did affect us. I thought I drew up a bad play but Chris was fouled."

Rivers, however, wasn't putting the blame on the Clippers' loss on one missed call.