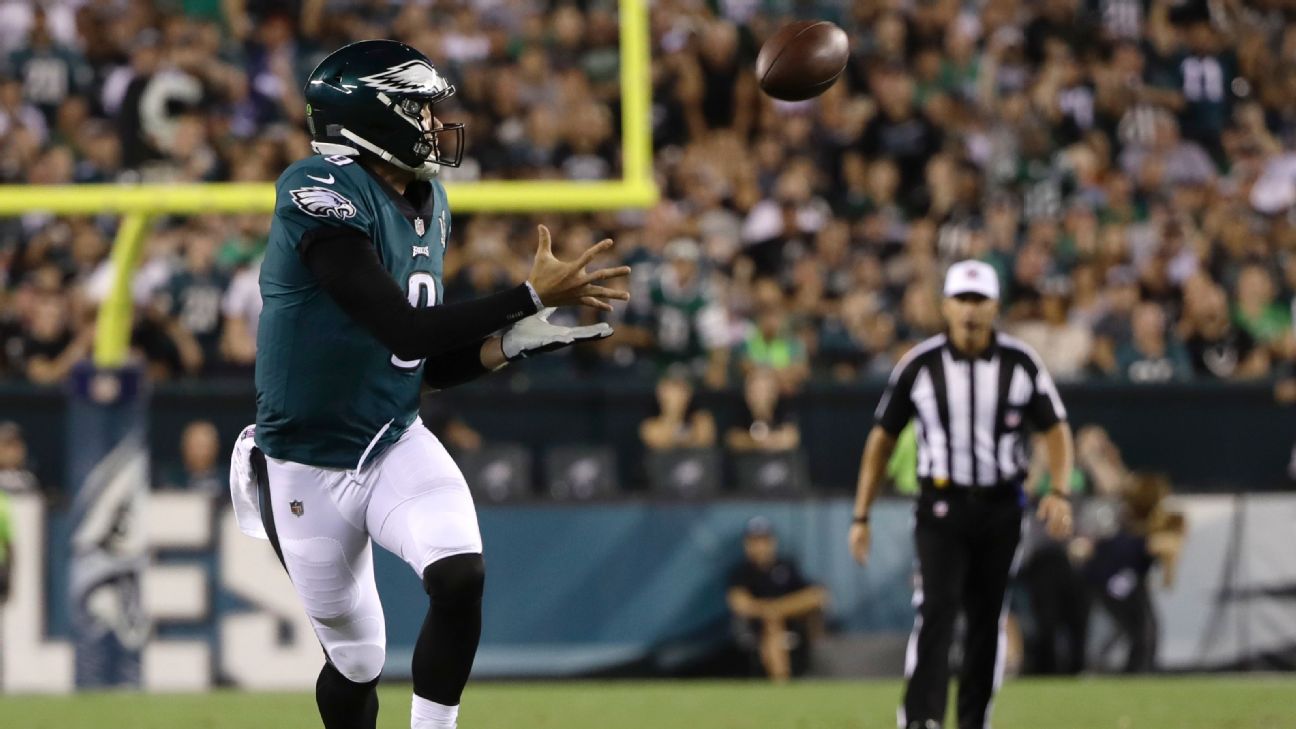 PHILADELPHIA -- With his offense struggling, Eagles coach Doug Pederson dusted off a variation of the most iconic playcall in franchise history. This one, known as "Philly Philly," provided the spark he was looking for in an 18-12 win over the Atlanta Falcons.

Nick Foles was not his Super Bowl self in the first half Thursday night, averaging just 3.6 yards per pass attempt, and the offense was outgained by Falcons wide receiver Julio Jones 89-68 over the first two quarters.

Needing to inject some life into the unit, Pederson dialed up a play similar to the "Philly Special" that came to define the Eagles' Super Bowl win over the New England Patriots. In fact, "Philly Philly" is a play the Patriots ran in the Super Bowl against the Eagles, but the pass to quarterback Tom Brady fell incomplete in that game.

Or in this case, better.

Facing a third-and-5 from the Falcons' 41-yard line midway through the third quarter, Nelson Agholor, playing the role of Trey Burton, came around on a reverse and lofted a throw to a streaking Foles for a 15-yard gain -- the longest of the night for Philadelphia to that point. Jay Ajayi scored the Eagles' first touchdown of the 2018 season five plays later.

Foles said they had run that play only once in practice. Agholor was a backup quarterback in high school but doesn't have much in-game throwing experience. He said the last pass he threw was during a spring game at USC.

The result of that pass?

During the Super Bowl, Foles famously went to the sideline on fourth-and-goal and suggested the trick play to Pederson, who casually responded, "Yeah, let's do it." This time they were on the exact same page.

"I went over there and talked to him and said, 'This might be a good time.' He pointed to the call sheet, and I was like, 'That's what I was coming over here for,'" Foles said. "So yeah, it worked again."

Pederson dialed up "Philly Special" on fourth-and-goal against the Patriots, to great success. That play is so celebrated in Philadelphia that a statue of the sequence right before it -- Foles and Pederson discussing running it on the sideline -- was just erected outside Lincoln Financial Field.

This offseason, Pederson said he would probably put that playcall on ice, but he broke out a successful variation at an opportune time to the delight of the crowd.

"It was a great time to call it. Injected some juice into the crowd, into the offense," safety Malcolm Jenkinssaid. "Gutsy call. And once again, gave our fans something to cheer about."