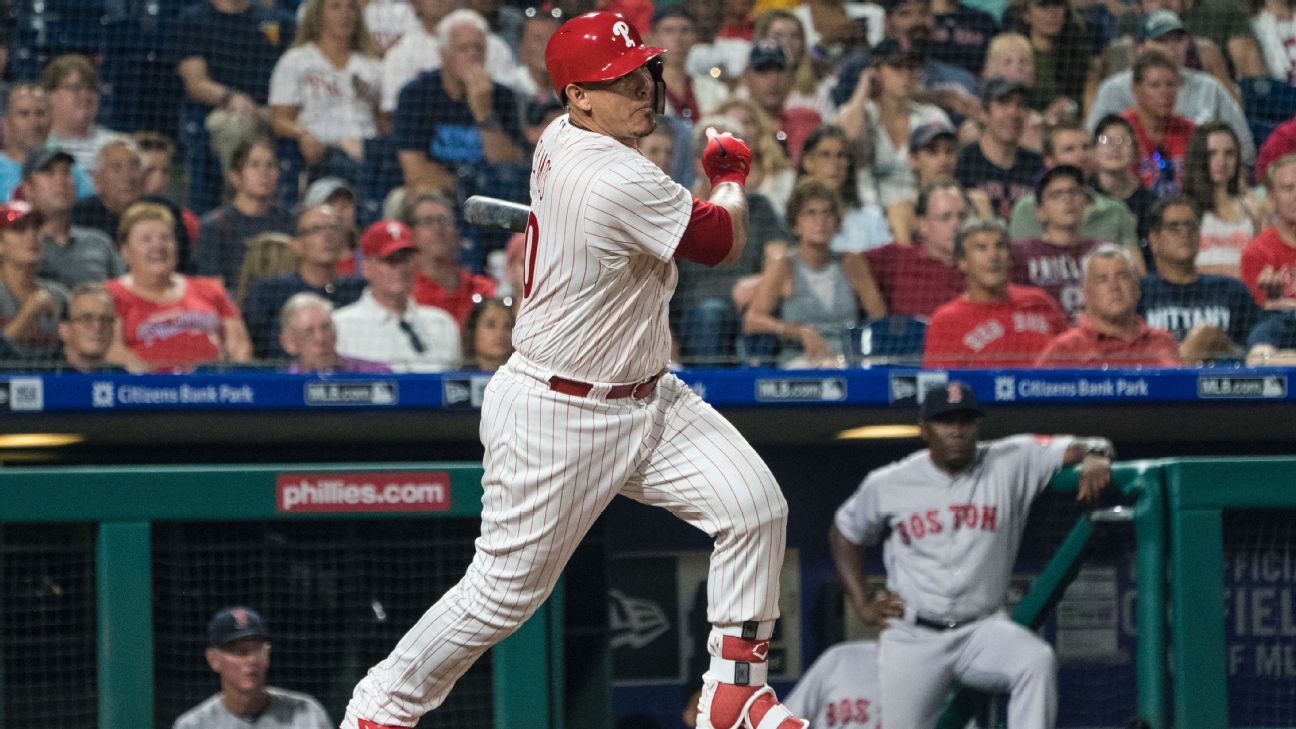 PHILADELPHIA -- When the Phillies acquired Wilson Ramos from the Tampa Bay Rays at the non-waiver trade deadline, they were looking to add a veteran catcher who could nurture their young pitching staff and be an offensive difference-maker in a tight National League East race down the stretch.

One game into his tenure with the team, Ramos has seven total bases and a 1.750 slugging percentage in the books. Introductory statements don't get much more declarative than this one.

Ramos, who has a thing for flashy debuts, doubled twice, tripled and drove in three runs, and the Phillies beat the Boston Red Sox 7-4 to split the teams' interleague season series at two games each. Afterward, Ramos received a Gatorade bath from teammate Odubel Herrerawhile the fans at Citizens Bank Park showed their appreciation.

"A lot of fans today were cheering my name," Ramos said. "That made me feel excited. There's nothing better than to go between those white lines and hear those fans cheering your name."

The Phillies are 66-53 and sit two games behind theAtlanta Bravesin the division, but their offense has looked a bit tired of late. They entered Wednesday's game with the second-worst team OPS in baseball (.613) in August, and they had scored only 39 runs in their first 11 games this month.

Philadelphia manager Gabe Kapler responded by tinkering with his lineup against Boston.

Justin Bour, acquired in a trade with theMiami Marlinslast week, singled twice out of the No. 2 hole and made a fine stretch at first base to get the Phillies out of a jam and keep the score tied at 3-3 in the sixth.

Asdrubal Cabrera, who came over from theNew York Metsin a July 27 trade, started at shortstop and contributed a single and a walk while batting third for Philadelphia.

But the night belonged to Ramos, who turned everyone else into a supporting player. According to the Elias Sports Bureau, he became the first hitter to collect three extra-base hits in his Phillies debut since Ed Freed achieved the feat on Sept. 11, 1942, against theCincinnati Reds. Carlos Ruiz was the last Phillies catcher with three extra-base hits, in April 2014 against the Los Angeles Dodgers

After coming to Philadelphia on July 31 for a player to be named, Ramos spent two weeks rehabbing from a hamstring injury. When he showed he was ready, the Phillies optioned catcher Andrew Knapp to Triple-A Lehigh Valley to make room on the 25-man roster and plugged Ramos into the sixth spot in the order.

Ramos struck out in his first at-bat against Boston's Nathan Eovaldi, then went to work offensively. In the sixth inning, he hit a line drive that eluded center fielderJackie Bradley Jr.and rolled to the wall. When the ball took an odd kick off the scoreboard, Ramos kept running and chugged to third base with his second career triple and first since 2011.

"When I was with teams that played against him, he always killed us by hitting the ball the other way," said Phillies hitting coach John Mallee. "Tonight, he did it again to right center on up-and-out-of-the-zone fastballs away. I'm so used to seeing that from him. It's finally nice to have him on our side."

The Phillies played MLB's best team tough in four head-to-head meetings this season. They went 2-2 against the Red Sox and held baseball's best offense to nine runs and a collective .204 batting average (29-for-142).

"We really do have a lot of respect for the Red Sox," Kapler said. "They put their guys in position to succeed. They're very well-managed. They have tremendous athletes and pop up and down the lineup. But we feel confident we can go toe-to-toe with them, and we feel like we will continue to go toe-to-toe with the best in baseball."

While Kapler stopped short of calling it the Phillies' best win this season, he managed aggressively from the outset. He used 20 players and had already employed pinch hitters Roman Quinn and Carlos Santana by the fourth inning. The Phillies used eight pitchers, and a ninth, Nick Pivetta, grounded out as a pinch hitter in the seventh inning.

"It was a lot of fun, I can tell you that," Kapler said. "Anytime the action starts early and you're starting to make decisions earlier in the game, it's really stimulating. It's invigorating. I think that's how we all felt in the dugout tonight -- invigorated."

No one felt more invigorated than Ramos, who compared the performance to his first big league game, when he went 4-for-5 for the Minnesota Twins against theCleveland Indianson May 2, 2010.

"Today is a special day for me," he said. "I wanted to show everybody here what I can do, and this is what I can do."

Ramos was so sufficiently sore and worn out afterward that he had to spend time soaking in an ice bath before meeting with reporters. But he already has raised the bar of expectations.

"The dude is a stud," Phillies reliever Tommy Hunter said. "I got a chance to play with him last year [with the Rays], and you don't expect anything less from him. He's a welcomed addition, and we can't welcome him with more open arms than we did tonight."