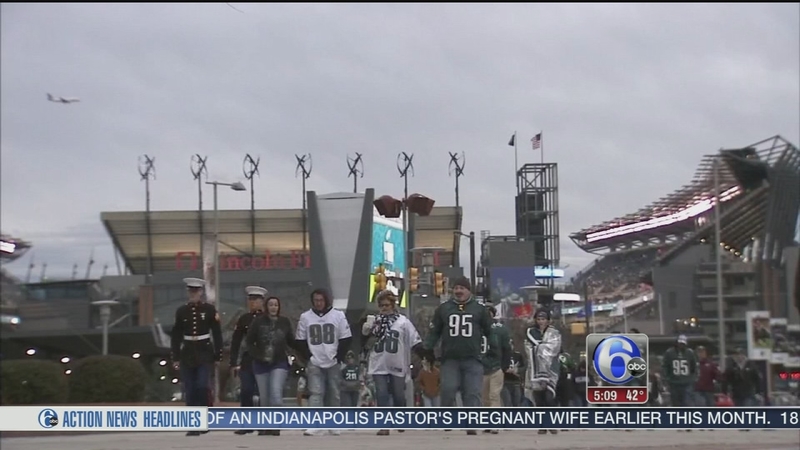 PHILADELPHIA (WPVI) -- For the Philadelphia Eagles, Flyers and Sixers, it's pretty much been a no-win situation.

Eagles Head Coach Chip Kelly reacted Monday to the scorn he's getting from outraged Eagle fans who are bitterly disappointed by his team's dreadful performance this season including in Sunday's 45-17 loss against Tampa Bay.

"Sometimes people panic and throw the baby out with the bathwater. I think we have a very good football team," Kelly said.

Penalties, failing to convert on third down, and dropped passes are among the endless list of mistakes this season leading to mounting calls for Chip's be fired.

Action News spoke to Birds' fans in Center City who say it's time for a change.

"They need to get rid of Chip. He's a college coach. He really does not know what he's doing on a pro level," Michelle Edwards of Cheltenham, Pa. said.

"I think it's sad that they gave him free range to put this team together. Everybody was excited, now everybody's let down," Gail Kehler of Center City said.

"I think they got to tear it down and start over. The coach/GM has to go," Dave Masselli of Drexel Hill said.

But the Eagles are not the only Philly pro team having a rotten season.

The Sixers have yet to win a game.

The Flyers are 2-8 in November.

And the Phillies had the worst record in the majors in 2015.

Most fans understand there are cycles of ups and downs for pro franchises, but in Philadelphia these are hard times across the board.

"Eagles are awful. They Flyers are terrible. The Sixers - forget about it, I stopped watching basketball. I love the Phillies, but they played horrible this year, but they're going to get better," Laura Rogovin of Center City said.

"What the Eagles are doing doesn't look too good. No comment [on the Phillies.] I wish the [Sixers] well. Not a Flyers fan, but they need some help, too," Gerald Patterson of West Philadelphia said.

"Chip's got to go, plain and simple. Phillies are rebuilding, give them time. Sixers are tanking again. What do they want? Another first round pick? I don't even know where to start with the Flyers," Jeff Sposario of South Philadelphia said.