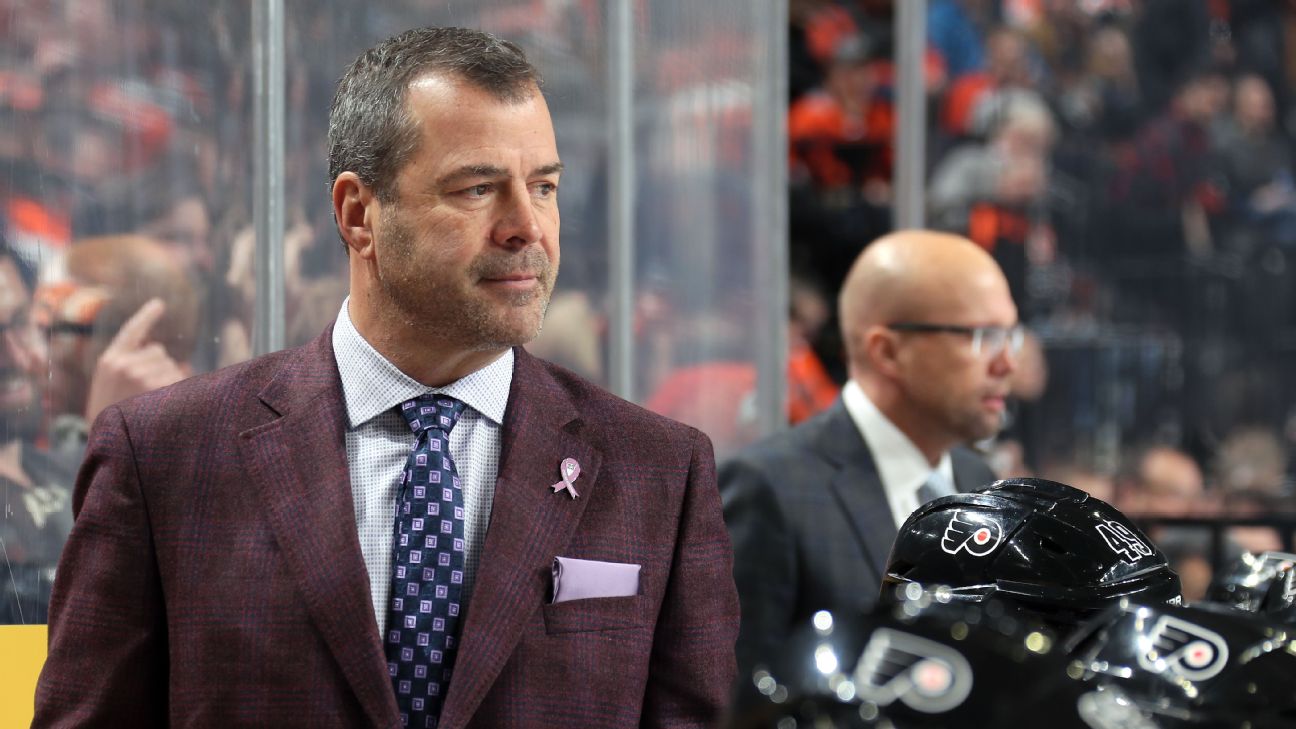 Philadelphia Flyers coach Alain Vigneault has pushed back against accusations made by Vegas Golden Knights goalie Robin Lehner that appeared to implicate Vigneault and the Flyers in the medical malpractice of players.

Lehner posted a series of tweets on Saturday about the treatment of players by NHL teams in an effort to bring attention to the stalemate between the Buffalo Sabres and Lehner's former teammateJack Eichelover his surgery options.


Lehner tweeted that benzodiazepines and Ambien are regularly given to players for travel and that "many teams without prescriptions just hand it out." In a follow-up tweet, Lehner seemed to imply that the Flyers were one such organization and called for Vigneault to be fired.

"I was obviously very disappointed," Vigneault said at Flyers camp Monday. "As far as me pushing pills, I don't need another income. I have no idea where that comes from. I don't know what else to say. I have no idea."

To make his point about what the coach said was false information, Vigneault asked a reporter if he believed COVID-19 was real. "A lot of people don't," said the coach. "Do you believe vaccines are good? Some people believe if you get the vaccine, you become a magnet, or that it changes their DNA. Do you believe President [Joe] Biden won the election? A lot of people don't. So there was something that was thrown out there that is completely false."

Lehner told ESPN's Emily Kaplan on Monday that he wasn't trying to accuse Vigneault of distributing pills to players. He said his claim was about the way the coach treats his players, which he believes is unacceptable.

In one of his tweets, Lehner called Vigneault a "dinosaur" among coaches.

"I don't know the young man. [He said] that I was a dinosaur. I consider myself experienced. Dinosaur? You can say that with experience you become a dinosaur, maybe? I do know that I've been coaching a few years. I am tough. I am demanding. But I care about my players. I want their best. Through the years, some guys have liked me and some guys a little bit less. But I've done it with the best intentions, with respect," Vigneault said.


Vigneault said he didn't know why Lehner singled him out on Twitter.

The NHL said it is seeking more information from Lehner regarding his accusations. Vigneault said he hasn't been contacted by the league.

Lehner said he had a productive call Sunday with the NHL Players' Association, which he also called out in his tweets.

James van Riemsdyk, the Flyers' NHLPA rep, said he hasn't seen players who have abused medication given by teams without a prescription.

"I think the game's come a long way during the course of my career. But I'm sure there are guys struggling with issues. I'm not going to be blind and nave to that," he said Monday. "But this generation of players is more willing to ask questions. Whether it's teams or the league or the PA, over the years, they're trying to inform guys on the seriousness of certain substances."
Report a correction or typo
Related topics:
sportsespnnewsnhlrobin lehnerphiladelphia flyersvegas golden knights
Copyright © 2021 ESPN Internet Ventures. All rights reserved.
TOP STORIES
Police identify 8-year-old struck, killed by hit-and-run driver
Kids living with skeletal remains in Tx. relied on neighbors for food
AccuWeather Alert: Nor'easter brings more rain at times
Man shot to death trying to confront ex-girlfriend: Police
Penn Wood High School dismisses early after fights
Rain & Wind: Flash Flood Watch continues in Delaware Valley
'Rust' armorer said loading blanks was 'scariest thing' in podcast
Show More
US details new international COVID-19 travel requirements
Jelani Day's cause of death was drowning but questions remain: Coroner
2 men wanted after deadly shooting in Montgomery County
Woman suing Kellogg's over fruit filling in strawberry Pop-Tarts
Search for suspect who shot teen in Delaware
More TOP STORIES News