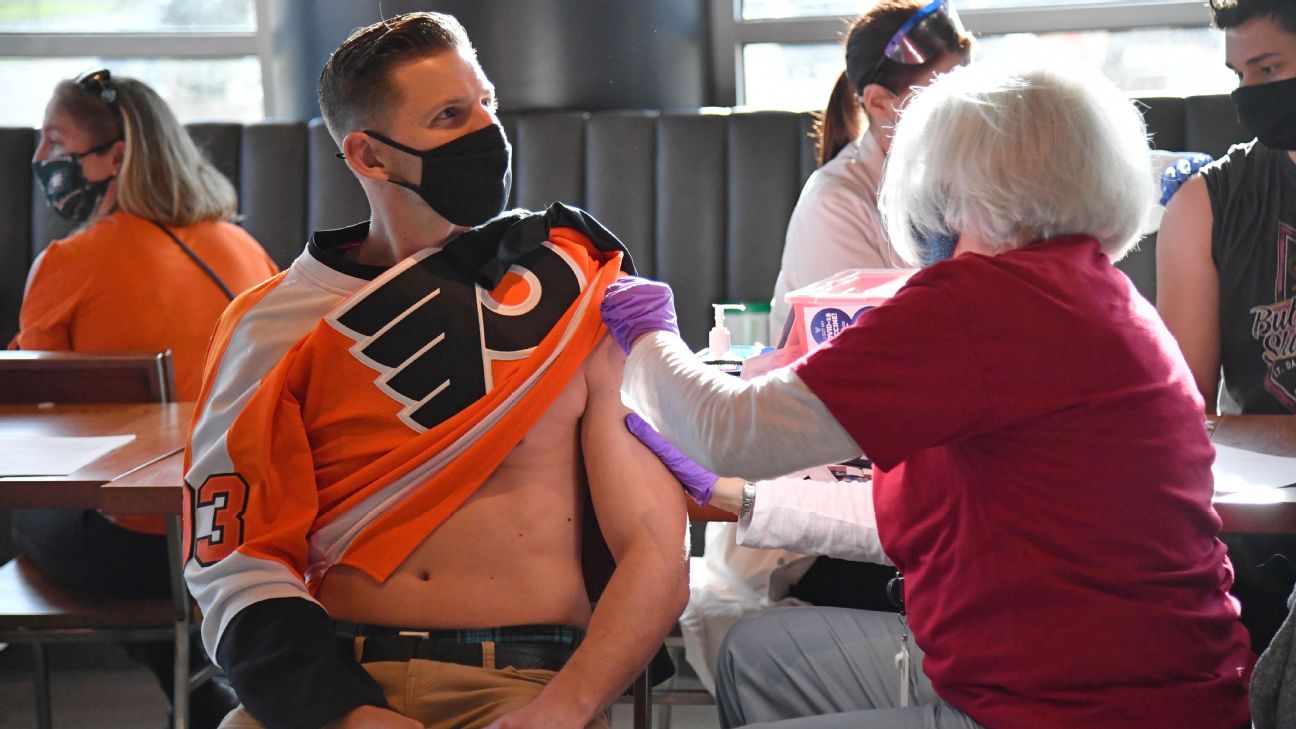 PHILADELPHIA -- The Flyers let their fans take a shot and score COVID-19 immunity.


Philadelphia Flyers fans also scored free tickets for the 2021-22 season as part of a push to take the COVID-19 vaccine before Monday night's game. The Flyers and Penn Medicine partnered to make the one-shot Johnson & Johnson coronavirus vaccine available to fans -- with vouchers for two tickets to a game and Gritty stickers and T-shirts as an incentive -- on the main concourse leading into the season finale against New Jersey.

The Flyers had a healthy line -- likely much healthier in a few weeks -- of fans waiting to get their shot. The Flyers are the only professional sports team in Pennsylvania and the only team in the NHL with a wide-ranging COVID-19 vaccination campaign, called "Take Your Shot." Some teams have had their facilities used as vaccination hubs -- the Eagles turned Lincoln Financial Field into a COVID-19 vaccination site for members of the autism community -- and the Flyers hoped some fans would turn the corner and accept their shots once they arrived at Wells Fargo Center.

The Flyers' owners, Comcast Spectactor, said at least 75 fans had been vaccinated shortly after the game started. Wells Fargo Center operates at 20% capacity, which is 4,000 fans.

"We were looking for a partner in the community. They reached out to us, and we were eager and happy to do it," said Patrick Brennan, Chief Medical Officer of the University of Pennsylvania Health System.

Brennan said he's suggested to Penn leadership a similar partnership with the Phillies, 76ers and Union, who have more games left in their seasons.

"Just looking at the age of the crowd, it's a younger crowd, so they've only recently become eligible," Brennan said. "I think we've seen people here tonight who seemed reticent, concerned. One of the things we've learned is that having the vaccine accessible to people in the community makes it easier. They're here, they have some time before the game, why not take the shot?"


Mark Petry, a Flyers fan from the Delaware Valley, wore a Claude Giroux jersey and rested on the concourse after receiving his vaccine. He had already bought tickets to the final game and decided on site to get the shot.

"I was pretty stubborn to not get it," he said. "My ways. How I am. It's a stupid reason, which I admit, but I'm against the hype behind everything. Whatever the masses do, I want to do the opposite.."

So why get a shot today?

Hey, whatever works. The Flyers will need all the fans they can get taking the vaccine if they want 20,000 strong in October at the Wells Fargo Center.

"I think it's a matter of vaccines, primarily, but it's going to depend on how things go with the variants," Brennan said. "If we don't get enough people vaccinated, the virus will continue to spread and then it mutates, and then we have more variants and then we have more problems."
Report a correction or typo
Related topics:
sportsespnnewsnhlphiladelphia flyers
Copyright © 2021 ESPN Internet Ventures. All rights reserved.
TOP STORIES
Plane crashes in wooded area behind homes in Doylestown
Cheltenham board president steps down after graduation speech apology
I-495 north closed in Wilmington due to crash involving 2 tractor-trailers
Philly officer shoots 2 armed men who were firing on street: Police
Vaping arrest turns into violent encounter with police in Ocean City, Maryland
Actress Lisa Banes dies after being hit by scooter
Pa. pandemic outdoor seating, cocktails to-go in jeopardy
Show More
CHOP ranked No. 2 on U.S. News' Best Children's Hospitals list
Girl Scouts have millions of unsold cookies
76ers fall to Hawks in Game 4 with Embiid hurting
GA cashier shot, killed after argument over face masks: Sheriff
Philadelphia school district to unveil electric buses
More TOP STORIES News