Philadelphia's Ben Simmons wants to be 'greatest to play the game'

ESPN
By AAP with ESPN staff 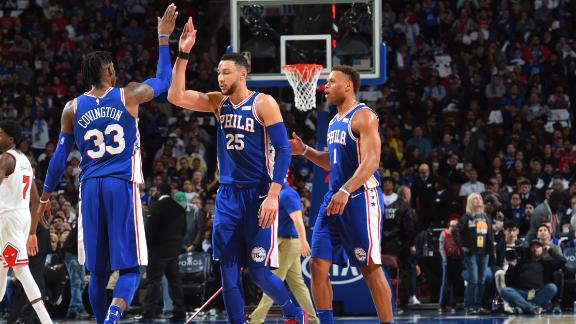 Ben Simmons believes he can be the greatest NBA player ever after becoming the first in modern history to score five triple-doubles in his rookie season.

The Australian starred for Philadelphia with 19 points, 17 rebounds and 14 assists as the 76ers crushed Chicago 115-101 on "Australian Heritage Night" at home on Wednesday.

"They're great players. If it wasn't for them, I wouldn't have a triple-double," he told NBC.

"I want to be the greatest to play the game. It's going to take a lot of work, but I believe I can get there."

Fellow Australians Patty Mills and Joe Inglis starred for their respective sides, with Mills scoring 15 points as the San Antonio Spurs thrashed the Memphis Grizzlies 108-85. But Simmons again flew the Australian flag highest just a day after he was overlooked for an All-Star reserve spot.

The 21-year-old, who's been picked to play for the World against the USA in the All-Star weekend's Rising Stars Challenge, posted his triple-double inside the first minute of the second half and his 22nd minute on court.

In eclipsing Jason Kidd's 1994-95 record of four rookie season triple-doubles, Simmons has now scored more than LeBron James, Russell Westbrook and Michael Jordan did together in their respective rookie seasons. He sits in third position for most triple-doubles of 2017-18 behind Westbrook (14) and James (7).

In a match the Sixers marked the Australian contribution of Simmons and coach Brett Brown, a former Australia national team boss, the Melbourne product's 11 first-quarter rebounds almost tied a franchise record for rebounds in a quarter held by Hall of Fame centre Wilt Chamberlain.

But Simmons denied his exceptional performance was motivated by missing out on the rare feat of gaining All-Star honours as a rookie.

Simmons wastes no time with triple-double
Ben Simmons might have been snubbed from the All-Star Game, but on Wednesday, it took him only 22 minutes to record the fifth triple-double of his rookie season.

Simmons continues dominance with powerful dunk
Ben Simmons throws down a massive dunk as the 76ers continue to dominate the Bulls.