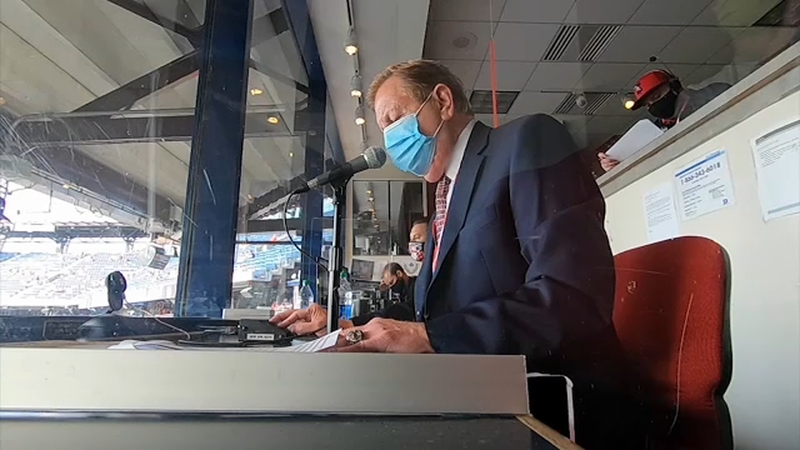 Phillies PA announcer Dan Baker is back after cancer battle

Dan Baker is the longest-tenured public address announcer in Major League Baseball. He's been behind the mic at Phillies games since 1972.

"Oh my gosh, this is life," Baker proudly tells Jeff Skversky. "I'm flattered to be connected with Phillies baseball. It's a great honor for me. I just love doing it."

Doctors discovered an irregular growth, which turned out to be a cancerous tumor in his sinus. It required a 24-hour surgery to remove. He was then hit with an infection due to complications and was in the hospital for six weeks.

Doctors took bone tissue from his leg and transplanted it in his face.

On top of radiation, the surgery slightly affected, of all things, his speech. He needed therapy, but now he's back at the ballpark and back in mid-season form.

"During the course of my illness Jeff, it was an inspiration for me to try to get back here and work hard, and get back doing the job that I love. It energizes me being back here doing this again. There was no doubt in my mind I was going to get back here."

Next season will be Baker's 50th behind the mic at the ballpark. And in the sport all about records, Baker wants to break the all-time record for most seasons as a public address announcer in baseball history. He has 11 to go.

"If the Phillies will have me and God blesses me with good health, and continue to perform at a high level, I want to set the record," Baker tells Skversky.

Baker doesn't plan to retire with only two World Series rings. He wants more and thankfully his latest scan is cancer-free.