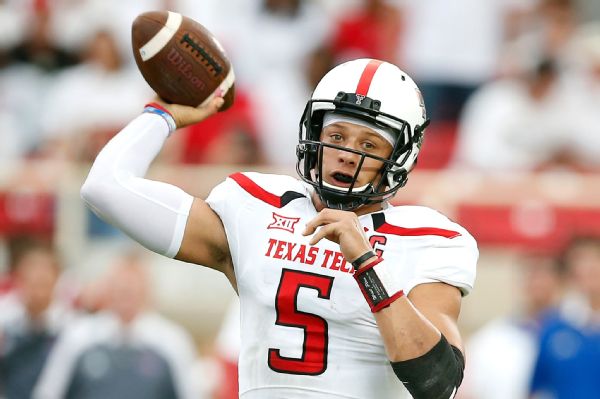 "Our staff is excited for Patrick's future in the NFL," Texas Tech coach Kliff Kingsbury said in a statement. "He is a tremendous talent and the sky is the limit for him moving forward. We wish him nothing but the best."

Mahomes threw for 5,052 yards, accounted for 53 total touchdowns and finished No. 1 in FBS in total offense for the second consecutive season. He said he received a second-round grade from the NFL draft advisory committee, and he is ranked as the No. 5 quarterback prospectby ESPN's Mel Kiper Jr.

"I know this program, with the people we've brought in and the plan we've put in place, there's a really good chance to make a run at the Big 12 in this next season and the near future," said Mahomes, who has signed with agent Leigh Steinberg. "It was a really hard decision for me, but it's always been a dream to play professional sports, and the dream of going through college and wanting to be an NFL player is always what drove me."

Mahomes took over the Red Raiders' starting job as a true freshman late in the 2014 season and has produced 12,097 total yards of offense and 115 touchdowns during his time in Lubbock. He leaves as the No. 3 passer in Texas Tech history with 11,252 career passing yards.

He broke several FBS, Big 12 and school records in October when he produced 819 total yards and completed 52 passes on 88 attempts in a 66-59 loss to eventual Big 12 champion Oklahoma.

Despite his prolific efforts, Texas Tech had the worst scoring defense in FBS (43.5 points per game) and finished 5-7 this season. Mahomes leaves the program with a 13-16 record as a starter. In the 11 games in which he threw for more than 400 yards, the Red Raiders went 5-6.

The second-team All-Big 12 selection started all 12 games this season despite injuries to both his shoulders as well as a left wrist injury that required surgery in December. He said the cast on his wrist will be removed Wednesday and that he'll begin rehab immediately.