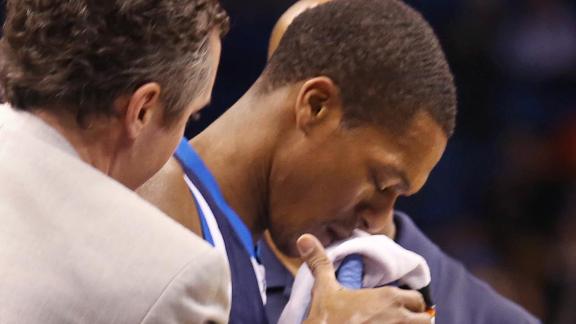 DALLAS --Mavericks point guard Rajon Rondosuffered an orbital fracture in his left eye as well as a nasal fracture and will miss at least three games while undergoing additional testing, the team announced Monday.

Rondo was injured when teammate Richard Jeffersonaccidentally kneed him in the face in the opening minutes of Saturday night's win over the Orlando Magic.

Rondo will not play in Monday night's home game against Minnesota or travel on a two-game road trip to play Golden State and Sacramento later this week.

Rondo's status will be officially updated later this week, but teammates are prepared to be without the Mavs' starting point guard for an extended period of time.

"Hopefully, he has a quick and speedy recovery," Jefferson said. "Luckily we have the All-Star break not far away, so hopefully that will give him some more time to get right. He's a tough guy."

The injury occurred on a freak play 98 seconds into the first quarter of Saturday's win. After poking the ball away from behind Magic guard Elfrid Payton, Rondo tripped and fell to the floor. As he was getting up, he was kneed in the face by Jefferson, who did not see his teammate as he turned and sprinted down the court on a fast break.

With blood pouring out of his nose, Rondo stayed down on the court for about a minute before being escorted to the locker room by the Mavs' athletic training staff. His left eye was swollen shut as the team left the arena.

Rondo has started every game but one -- which he sat out to rest -- since arriving in Dallas as the centerpiece of a blockbuster trade with the Boston Celtics on Dec. 19.

Coach Rick Carlisle declined to say who would replace Rondo as the starting point guard for Monday's game against the Timberwolves. His options are Devin Harris, J.J. Barea and Raymond Felton, a veteran who has been a starter most of his career but has played sparingly this season.

The Mavericks on Monday also recalled guard Ricky Ledo, who was averaging 16.0 points and 3.8 assists for the Texas Legends of the NBA Development League.

"We've just got to make it work with the guys that we have available in these situations, and we will," Carlisle said. "This is part of the challenge of an NBA season."

Facial Fractures For Rondo
Tim MacMahon discusses the injury to guard Rajon Rondo and how the Mavericks will need to adjust while he recovers.

Mavericks Win After Rondo Leaves
After Rajon Rondo left in the first quarter after taking a knee to the face, Monta Ellis had 25 points and 13 assists in Dallas' 108-93 win over Orlando.

Rondo Hurting Mavs?
Tom Haberstroh goes inside the numbers to show how Rajon Rondo has jammed up the Dallas Mavericks offense.