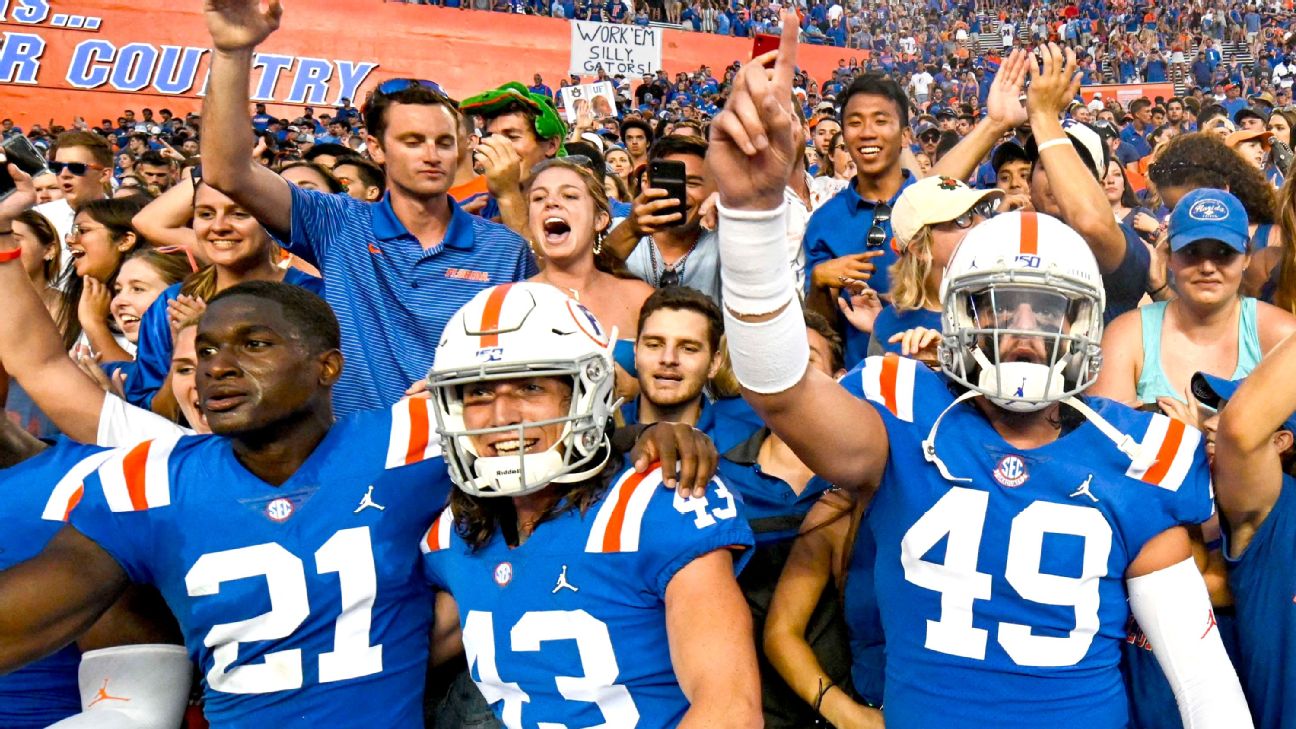 This is when the field starts to narrow, as it's the second consecutive week in which an undefeated SEC team has to lose.

Last Saturday, Auburn lost at Florida, leaving four undefeated teams in the league -- tied with the Big Ten for the most remaining in the Power 5 conferences. Now, the Gators will try to avoid the same fate on the road, at LSU in a game that will be devastating for the loser's playoff hopes. According to the Allstate Playoff Predictor, no game this week will have a bigger impact on the final ranking.

LSU is already in a strong position after its Sept. 7 victory at Texas, but this is an opportunity for the Tigers to bolster their case as a top-four team. Florida has a chance to beat consecutive top-10 opponents for the first time in school history.

"One of the great challenges in this league is it's not the one game, it's the multiple games in this league," Florida coach Dan Mullen said. "That's always the challenge. That's not true in every league. A lot of times you don't have these type of games in every single league where you have consecutive weeks playing top-seven opponents. ... We were the biggest game in the country last week. We're the biggest game in the country this week."

But certainly not the only one.

Week 7 features four games between ranked opponents, the most in a week this season. It's a sneaky lineup, with six games that have the potential to shake up the playoff conversation, ranked in order of the most consequential:

1. No. 7 Florida at No. 5 LSU (ESPN, 8 p.m. ET): If Florida loses, the damage is twofold: First, the Gators still have to face No. 3 Georgia on Nov. 2 -- the final Saturday before the selection committee releases its first ranking of the season. ESPN's Football Power Index gives Florida a 29% chance to beat Georgia, and the Gators also have to face SEC East opponents South Carolina and Missouri on the road. Second, Florida's résumé includes wins against FCS opponents UT Martin and Towson, which will undoubtedly be a sticking point for the selection committee.

In 2015, North Carolina lost its season opener on a Thursday night to South Carolina, 17-13. The Tar Heels then proceeded to run the table and win the ACC Coastal Division, setting up a meeting with No. 1-ranked Clemson in the conference title game. At 11-1, UNC was ranked No. 10 -- behind three two-loss teams. Then-selection committee chair Jeff Long made it clear that the two FCS victories held UNC back.

"You need to play nonconference games that test your team against out-of-conference opponents," Long said, "and I do think that's demonstrated throughout our ranking, and I think while we're not trying to send messages, I think you can look at our rankings and get messages."

Yes, it's a different committee, different chair, but the value of strength of schedule remains the same within their meeting room. That's not to say Florida can't finish in the top four -- but two FCS teams could make it twice as difficult.

As for LSU, this is not the time for the mulligan -- save that for Nov. 9 at Alabama. The SEC is the only Power 5 conference that currently has more than a 50% chance to put two teams into the playoff, and that's in part because of the possibility that either Alabama or LSU finishes the regular season with just one loss -- to the other.

If LSU loses to Florida, it's not done, but it still has to face Auburn, Alabama and Texas A&M. The division champions are determined by overall conference record, so Saturday's loser will be playing from behind in its division race, even though Florida is in the East and LSU the West.

2. No. 6 Oklahoma vs. No. 11 Texas (Fox, noon ET): This is possibly more important than it was a year ago because unlike last season, when OU had a chance to punctuate its résumé with a Friday night win against a No. 13 West Virginia team in Morgantown, No. 11 Texas might be the only ranked opponent the Sooners face during the regular season. (Baylor is currently No. 22, but has yet to face its most difficult stretch.)

A loss won't eliminate OU -- the Sooners lost to their rivals last season, but the rematch with the Longhorns in the Big 12 title game was exactly what the Sooners needed to earn a spot in the top four. Texas, however, is already on the playoff bubble, and will be out of the discussion with a second loss unless the Longhorns win the league and there's chaos elsewhere.

If Texas can win, though, it has a shot. The Longhorns' only loss was to LSU. The question is if Texas can survive three of its final five games on the road.

3. Michigan State at No. 8 Wisconsin (3:30 p.m. ET): Much like it was in the first quarter for Ohio State against the Spartans last week, this could be tricky for Wisconsin, and if the Badgers want to get the bump from "should be in the conversation" to actually in it, they can't afford to lose before they get to Columbus on Oct. 26.

A Wisconsin loss could have a domino effect, affecting Ohio State's résumé as well as the entire Big Ten. The best-case scenario for all three is obviously for the Buckeyes and Badgers to meet again in the Big Ten championship game with one undefeated and the other with just one loss. Take your pick.

The worst-case scenario? For both Wisconsin and Penn State to lose Saturday. That would certainly deflate the perception of the Big Ten's depth right now.

What if Penn State loses?

4. No. 10 Penn State at No. 17 Iowa (ABC, 7:30 p.m. ET): This is where the Nittany Lions' playoff intentions begin to show, as it's their first ranked opponent to date, and the first of three Big Ten road trips over the next four games. The lone home game during that span is against Michigan on Oct. 19. With a weak nonconference schedule that includes Buffalo (2-4), Idaho (2-4) and Pittsburgh (4-2), PSU needs to earn statement victories within the league. There are still doubts surrounding Penn State because of its schedule, and a loss Saturday would validate those concerns as well as push the Nittany Lions further into the shadow of Ohio State.

There are multiple questions surrounding this game for both teams. Will Iowa be suffering a hangover from the Michigan loss? The Hawkeyes looked uncharacteristically undisciplined last week, with penalties and turnovers. If not, will Penn State continue to cruise on the road against a ranked conference opponent?

5. No. 1 Alabama at No. 24 Texas A&M (CBS, 3:30 p.m. ET): It is an SEC road game, and Alabama can lose -- but it shouldn't. If it does, the Tide can keep their playoff hopes intact, but it obviously makes it tougher to win the West division. Alabama's two most difficult remaining games are Nov. 9 vs. LSU and Nov. 30 at Auburn. Alabama would probably have to beat them both to win the division.

If the Tide are going to sneak into the top four without winning its division again, the lone loss would likely have to be to the eventually division winner -- and that's probably not going to be the 3-2 Aggies.

Another Texas A&M loss could also have a ripple effect on Clemson's résumé. With an otherwise weak ACC, right now it's the Tigers' best win. It would really be scrutinized only if the Aggies finish below .500 and Clemson loses a game.

6. USC at No. 9 Notre Dame (NBC, 7:30 p.m. ET): Notre Dame could probably lead this list every week, as each game has turned into an elimination game after the Irish loss to Georgia. As long as Notre Dame remains in contention, though, a Power 5 conference champion also remains at risk of being left out (again). ESPN's FPI gives the Irish an 84.2% chance to win -- and it should, given what we've seen from both teams so far. 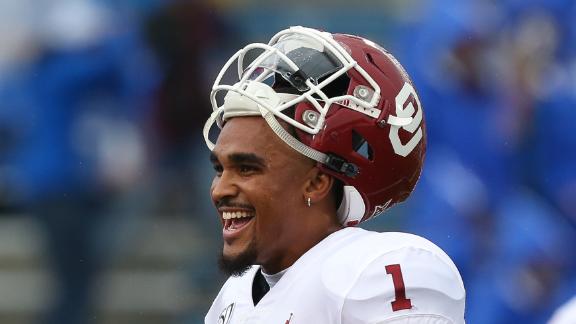