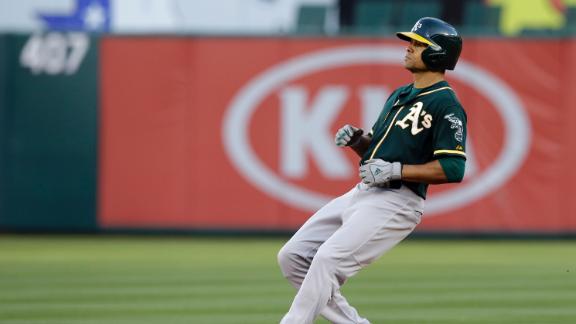 Oakland Athletics starting left fielder and leadoff hitter Coco Crisp needs arthroscopic surgery on his elbow and is expected to miss six to eight weeks, according to a report.

The San Francisco Chronicle reported Thursday that Crisp, who is in the first season of a two-year deal, needs to have a procedure to remove a bone spur and bone chips from his right elbow.

Crisp, who hit .246 with nine home runs, 47 RBIs and 19 stolen bases for the A's last season, reported some soreness Wednesday, although manager Bob Melvin said that it wasn't a concern.

"He's the one guy on the team we're not worried about getting at-bats,'' Melvin said Wednesday. "We'll make a determination on where we're going tomorrow."

Crisp has been put on the disabled list four times in his previous five seasons with the A's.

Oakland already was poised to start the season without starting right fielder Josh Reddick, who suffered a strained oblique earlier in spring training.

The A's likely will turn to either Craig Gentry, Billy Burns or Mark Canha to replace Crisp in left field.