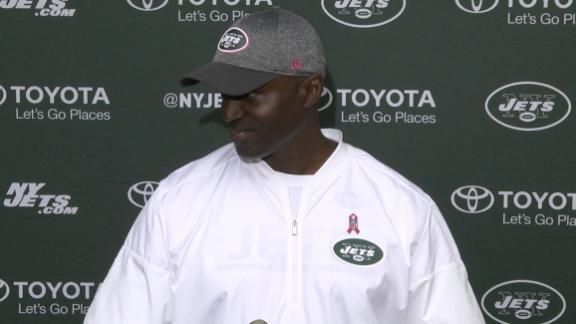 GLENDALE, Ariz. -- Despite a four-game losing streak and a disappearing offense, Ryan Fitzpatrick will remain the New York Jets' starting quarterback for at least another game.

"Fitz will be back next week," coach Todd Bowles said after a 28-3 loss to the Arizona Cardinals on Monday at University of Phoenix Stadium.

Bowles pulled Fitzpatrick with 8:20 remaining in the game and the Jets trailing 28-3. It was the first time in 22 games as the Jets' starter that Fitzpatrick was removed for performance. Backup Geno Smith finished the game.

The Jets (1-5) return home to face the slumping Baltimore Ravens (3-3), who have dropped three straight, on Sunday. The Jets have scored only three touchdowns in the past four games, and one of them was a fluke fumble return.

Explaining the decision to insert Smith, Bowles said he "wanted to get him some reps." He used a baseball analogy and said he was simply inserting a relief pitcher.

"It's not that I have no confidence in Geno," Bowles said. "We have two quarterbacks that can play right now. Fitz is our starter. Anybody back there would've been under duress today."

Fitzpatrick's last pass was a red zone interception at the end of the third quarter. It was his 11th interception of the season and his fourth in the red zone. He completed only 16 of 31 passes for 174 yards. The Jets managed only 230 yards and converted only two of 13 attempts on third down.

"It definitely wasn't Fitz's fault," Bowles said. "He barely had time to throw. Anybody you put back there would've had problems."

After Fitzpatrick's interception, Smith flung his baseball cap, paced anxiously on the sideline and threw a cup of ice on the field. He appeared upset that he wasn't playing.

"Just frustration," he said. "We're not putting up points. We're not winning the game. Our record isn't what we thought it would be or what we think we are."

Smith completed his first four passes, but his only series ended with a sack and an interception.

Commenting on Bowles' decision to stick with Fitzpatrick, Smith said, "As a competitor, I want to play at all times. I think you guys know that. I can't reiterate that enough. It's not about me and never has been. We're 1-and-whatever, and we have to pull ourselves out of a hole. No matter who it is, no matter how we spark this thing, we have to figure out a way to get some wins."

Wide receiver Brandon Marshall, an outspoken Fitzpatrick supporter, took the blame for the interception and said he ran the wrong route.

"Ryan read it right, and he threw the pick, but it's my pick," he said. "Interceptions are on everyone."

Fitzpatrick said he didn't want to be removed, but he promised to keep a positive outlook. Later, he stated why he believes he should remain the quarterback.

"We're sitting at 1-5, so there's obviously stuff that needs to change," he said. "I would love to be part of that change, trying to get it headed in the right direction. ... I've dealt with plenty of adversity in my life.

"I just think the biggest thing for a quarterback is those guys in the huddle, when they look at you, have to be confident. I think I have that. You can go ahead in the locker room and ask them all if you want."