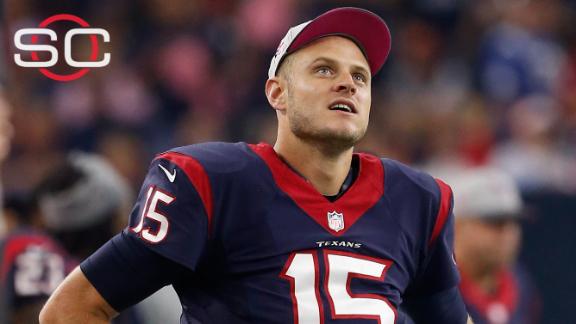 OWINGS MILLS, Md. -- Newly-signed Baltimore Ravens quarterback Ryan Mallett said he has grown up a lot from a difficult season in Houston, which led him to being released from the Texans two months ago.

"I acted immaturely at some games in Houston," Mallett said Wednesday after his first practice with the Ravens. "There were reasons for it. But that's not going to be discussed right now. The best thing probably was for me to be cut."

Mallett, 27, went from being the Texans' starting quarterback to being cut in a span of 19 days. He was chronically late for team activities, from oversleeping for a training camp practice to missing a team flight to Miami.

Sources told ESPN's Ed Werder that the Ravens signed Mallett after he sought professional help for the personal issues that led to his downfall in Houston. Mallett declined to discuss the details of that process but said he would at some point.

Getting cut by the Texans has made him a better person and player, Mallett said.

"It was a piece of humble pie, but it digested real quickly," Mallett said. "I'm just here to try to be a good teammate and contribute any way I can for the Ravens."

Mallett was noncommittal on whether he can learn the offense enough to play in the final three games.

"It's really a minute-by-minute process right now," he said. "So, we'll see."

"He's here. He's on the team," Harbaugh said. "Yeah, he absolutely has a chance."

Harbaugh wouldn't define this as a trial period for Mallett, whose contract reportedly could be worth as much as $2.5 million in 2016.

"I think everybody is on that kind of trial in life," Harbaugh said. "When you get a couple of strikes against you, it certainly brings it into sharp focus. He has an opportunity to make the best of it, and he's determined to do that. What he makes of it really in the end is up to him."

A third-round draft pick by the Patriots in 2011, Mallett played in four games in three seasons in New England before being traded for a conditional draft pick to the Texans. He was 2-4 as a starter in two years with the Texans. Mallett has completed 53.1 percent of his passes in his career with five touchdowns and seven interceptions.

"Obviously, he's a guy who's had a certain amount of success [in] the NFL and has a lot of talent," Harbaugh said. "He's had his ups and downs, we've talked about those things with him. Guys go through things in life and in careers. We'll see if he can get it going in the right direction. He's certainly capable of doing it. I love his demeanor. I love his attitude, what I've seen of it so far."