Scott Brooks: I don't listen to 'they' 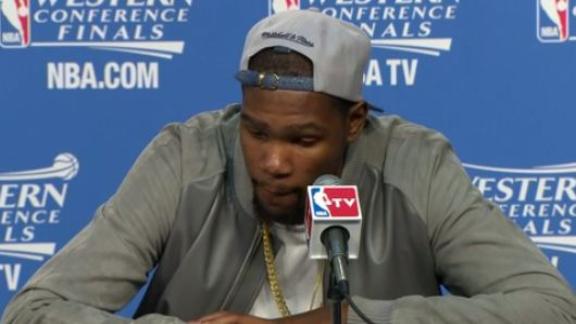 OKLAHOMA CITY -- Thunder coach Scott Brooks says he doesn't listen to his critics and hasn't even thought about the possibility of not returning next season as the team's coach.

"It's something I don't even consider," he said. "I just do my job every day."

The Thunder were eliminated in six games by the San Antonio Spurs on Saturday night, ending their season two wins short of the NBA Finals. After a meteoric rise from a team with potential to perennial title contender, the Thunder have had the weight of expectations placed squarely upon them. And at the front of that is Brooks.

"I've had a lot of valuable lessons from my mother, and she's always told me this: 'You do your job every day and live with the results,' " he said. "They say you can't worry about what 'they' say. You never even meet those people.

"I have many stories I could tell you about my mom, and that's one of them. Don't worry about them. Those are the people that told me I wasn't going to make it as a 4-11 freshman in high school, my dream of being an NBA player. I don't listen to 'they.' I always focus on what I do and try and do it to the best ability I can. I'm not looking from nobody other than doing my job and living with the results. I love what I do, and I love the team I'm with. I know I have to get better and I know the team has to get better."

With two superstars like Kevin Durant and Russell Westbrook, there's a feeling the Thunder are capable of more, and that it starts with their coach. But both players fully endorsed Brooks the morning after the Thunder's Game 6 loss.

Added Westbrook: "Ever since I've been here and Scotty became the coach, he's done a great job in having confidence in me personally. There's times where things have gone south and he's the only that always, always had my back, regardless of what happened. People saying I was doing this or doing that, being selfish, being that, he was always the first person to step up and have my back and support me regardless of what's going on. I think he does a great job of always staying positive and trusting in our guys and trusting in our team."

One area of criticism Brooks has heard most is with his starting five, most notably in his commitment to veteran big man Kendrick Perkins. Brooks indicated during his end-of-year media session that he could be open to a change in the starting five next season after the emergence of promising center Steven Adams.

"That remains to be seen," Brooks said. "There's a lot of work that needs to be done this summer. Obviously, [Perkins has] been a big part of what we've done over the years.

"Positions are available. I can say that."

Brooks changed his starting lineup twice during the postseason, once inserting guard Caron Butler in for Thabo Sefolosha for Games 6 and 7 in the first round against the Memphis Grizzlies, and another adding guard Reggie Jackson for the final four games against the Spurs. Sefolosha is an unrestricted free agent this summer, and went to the end of the bench after losing his starting spot to Jackson. Asked if he would consider making Jackson a starter full-time, Brooks was noncommittal.

"I hate to put myself in that position because who knows what will happen over the summer," Brooks said. "[Reggie] can play both positions, as can Russ. They can play together, that was proven in this series."

Brooks, who was named NBA Coach of the Year in 2010, has overseen the Thunder's growth from a team that started its inaugural season in OKC at 3-29, to five straight playoff berths, four consecutive trips to the second round, three of the last four appearances in the Western Conference finals and one trip to the NBA Finals in 2012.

But there is a certain burden of expectation for the franchise to break through and win a championship. Contendership status is good and all, but with players like Westbrook and Durant, each year gone by is another missed opportunity. Durant can be an unrestricted free agent in the summer of 2016, with Westbrook following him in '17.

The window is still wide open, but the clock does seem to be ticking.

"What clock? There's no clock," Westbrook said. "I don't believe in saying the time is closing. We have a lot of guys on this team capable of making things happen, and our organization has done a great job of putting us in the position to be able win the championship every season. And once it gets to that point, it's on us to make it happen."