Sean Couturier gets Gritty, has something to prove 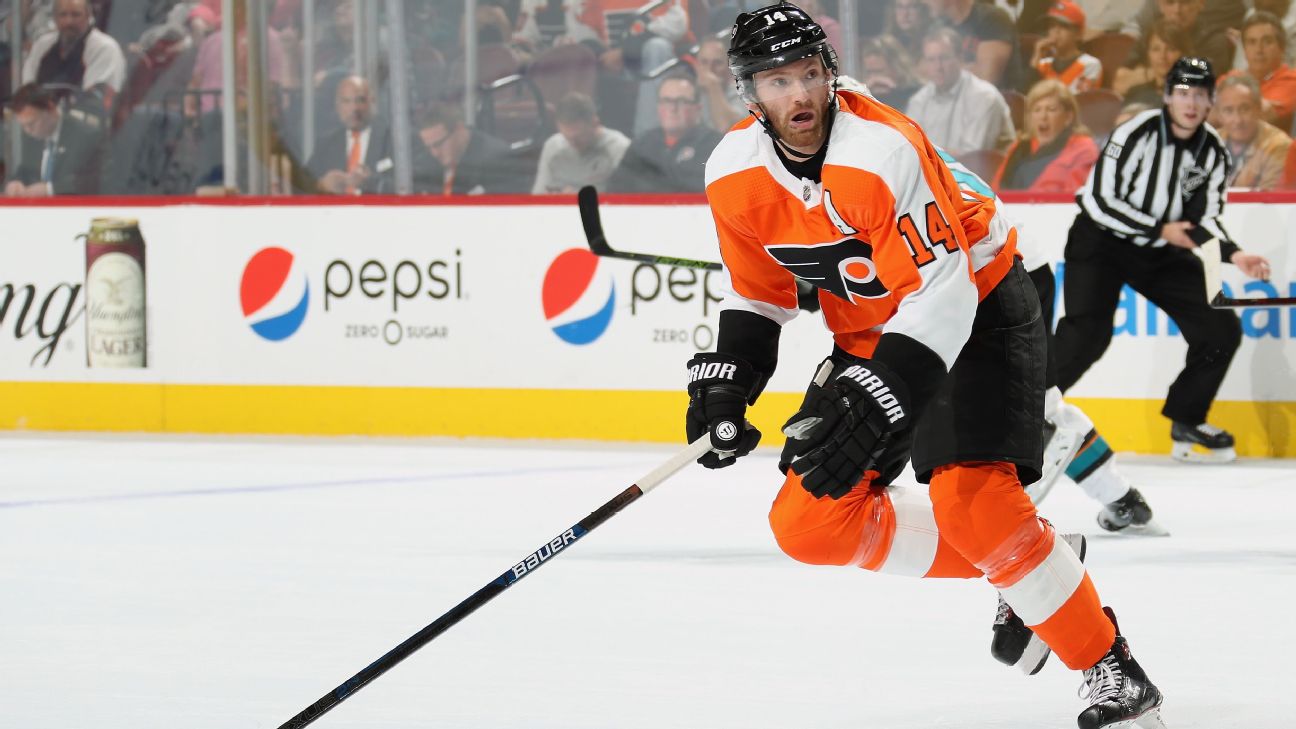 "I'm not going to lie. At first, I wasn't a big fan of his. I wondered what the idea behind it was," said the Philadelphia Flyers center of the team's googly-eyed mascot-turned-pop culture phenomenon. "But as each game goes by and he gets more headlines, more attention, I'm starting to like him."

It took just a month for perceptions to change between an NHL player and the sentient child's birthday cake that his team calls a mascot. In other cases, perceptions take a little longer to change. For example, a player primarily known for his defensive prowess attempting to show the hockey world he can put the puck in the net, too.

Such was the task for Couturier last season. His defensive qualities were much appreciated, something that dated back to his first postseason as a rookie when he played a shutdown role against Pittsburgh Penguins star Evgeni Malkin. He had twice finished in the top 10 for the Selke Trophy, given to the league's top defensive forward. But Couturier knew he had more to offer. So when the decision was made to plop him on a line with scoring winger Jakub Voracek and star Claude Giroux, shifting to the wing after years at center, he knew the conditions were right for a breakout season.

"We were excited to get the chance to play together. For years, Giroux was one of the only guys I hadn't gotten a chance to play with on the team," Couturier told ESPN this week.

The results were startling: Giroux posted a career-best 102 points, and Couturier obliterated his previous career bests with 31 goals and 45 assists. The way he played fit well with what that line needed.

"You see Coots going to the net a lot. By nature of playing with 'G' and Jake, there's going to be pucks that go to the net," Flyers coach Dave Hakstol said earlier this season. "There's going to be some loose change hanging around there, and that's a strength he can bring to that line, always having a net presence on second and third pucks."

Couturier's shooting percentage was 13.7 on a career-high 227 shots, 62 more than he'd ever produced. He played 21:36 per game, the first time he averaged over 20 minutes a night. All of this happened while his faceoff percentage was still well over 50 percent, a defensive rock on an offensive line.

"I was trying to prove a lot of people wrong. That I could put up some offensive numbers. That I wasn't just a shutdown defensive guy," Couturier said. "I always knew I could do more to help this team, and it's just about getting the opportunities and the chances. Last year I got them and I capitalized on them."

His breakout season earned him more notoriety than ever before, including awards love: He finished second to Anze Kopitar for the Selke.

His offense nearly helped him win a defensive award.

"Yeah, I guess so," Couturier said with a laugh. "It's become a different award over the years. More of a two-way award now. But it's all right. The defensive side is something I take pride in, same as the offensive side. It's just a matter of balancing both out."

That balance has helped players like Kopitar, Jonathan Toews and Patrice Bergeron win the Selke. Couturier said he admires all of them.

"Those guys take pride in playing the game the right way and being responsible on both ends of the ice," he said. "It's something I've tried to get into my game. Going against them is a tough task. They don't have any weaknesses. If you rush things, they'll make you pay."

Bergeron and Couturier have an interesting relationship, and not just because the latter at times last season seemed like the heir to the former. Couturier's father, Sylvain, was an assistant coach with Bergeron's Quebec Major Junior Hockey League team in Acadie-Bathurst in 2002.

"Sean was coming before or after to go on the ice with us," Bergeron recalled at the NHL Awards last June. "He was also around the locker room. He was 10 years old, but he was really skilled for his age and you could tell he had it down."

Bergeron is 33 now, having played 972 games in the NHL heading into the Bruins' matchup with the Flyers on Thursday. While visions of a 19-year-old Couturier shining as a rookie still seem fresh, he's become a veteran in his own right, recently having played his 500th NHL game.

"I still consider myself a young guy. But it goes by quick," he said. "It's my eighth year already. You have to enjoy each moment. Hopefully I stay healthy, play another 500 games."

He's changed a lot in that span, having gone from defensive stopper to top-line center. But the Flyers have changed a lot, too.

"My first year we had [Chris] Pronger, [Daniel] Briere, Giroux, [Scott] Hartnell, [Jaromir] Jagr. A lot of veteran, established players," Couturier said. "As the years went on, it went younger and younger, especially when [Ron Hextall] stepped in as the GM. So things have changed as the philosophy at the top has changed. The future is bright. There have been a few years when it's been mediocre. When the future hasn't been bright. But there's a lot of young talent coming up. I'm excited to be a part of it."

He's off to a slow start in 2018-19 with three goals in nine games, although a knee injury that took him out of the preseason is likely a factor. Couturier said he's determined to make this season a continuation of last. Once perceptions have changed, one can't allow the new outlook to seem like a misconception.