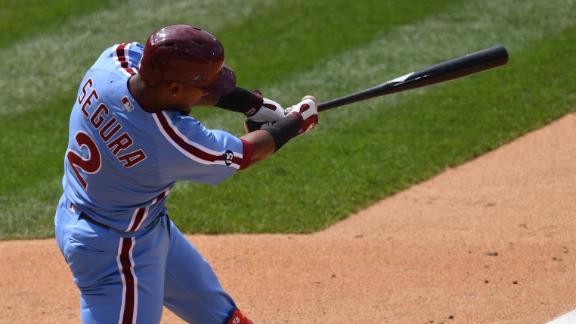 PHILADELPHIA -- - Jean Segura slowly jogged around first and watched Odubel Herrera dive headfirst across the plate for the winning run before another walk-off celebration began for the Philadelphia Phillies.

Segura's two-run single high off the left-field fence in the 10th inning gave the Phillies a 4-3 comeback win over the Atlanta Braves on Thursday.


"That's what I'm here for," Segura said about his knack for clutch hits.

The Phillies took two of three from the three-time defending NL East champions, including a walk-off win Wednesday night on Luke Williams' first big league homer with two outs in the ninth.

Freddie Freeman hit a solo homer off closer Hector Neris with one out in the ninth to tie it, and the Braves scored two runs off José Alvarado (5-0) on a wild pitch and passed ball in the 10th.

But Alec Bohm's RBI single off Chris Martin (0-2) in the bottom half cut it to 3-2. Herrera followed with a double down the left-field line. Segura then hit a drive to deep left-center. He kept jogging around first, toward second and waited for teammates to mob him.

"I knew it was good enough to walk it off so that's why I (watched) it a little bit," Segura said.

Zack Wheeler struck out 12 in eight dominant innings and Segura hit an RBI double in the eighth to give the Phillies a 1-0 lead but Freeman's 14th homer erased it. Herrera had a chance to rob Freeman but his jump was too far in front of the fence and the ball fell beyond his glove.

Dansby Swanson started the 10th inning on second base, advanced to third on a bouncer to short and scored on Alvarado's wild pitch after pinch-hitter Guillermo Heredia walked. Alvarado walked two more batters before a passed ball by third-string catcher Rafael Marchan allowed another run to score.

"It's been a weird year," Braves manager Brian Snitker said. "You have to deal with the adversity, make adjustments and we have to get better. We're capable of it."


Wheeler allowed four singles and no walks in his latest stellar outing. He lowered his ERA to 2.29 with his seventh straight start giving up three runs or fewer. Wheeler fanned every batter in Atlanta's lineup except Swanson and recorded double-digit strikeouts for the 13th time in his career and fifth this season.

"I've had a couple good runs a couple different years, but it wasn't like it is now," Wheeler said. "The difference is I'm throwing the cutter more, the slider is better and I can command all of those pitches."

"We feel like we're super close," Anderson said. "We just have to keep to it. It's not a matter of if, it's when."

The Phillies broke through against A.J. Minter when Herrera lined a double off the right-field fence with one out in the eighth. Herrera flipped his bat and hesitated to watch the ball before running to first and missed an opportunity to reach third when right fielder Ronald Acuña Jr. fumbled the ball.

Segura followed with a double down the left-field line to knock in Herrera.

"There will be discussions," Girardi said of Herrera not running hard right away.

Hours after Williams' hit a two-run shot to give Philadelphia a 2-1 win, the rookie utilityman got a standing ovation and heard chants of "Luuuuuuuke" when he stepped into the batter's box for his first at-bat.

Anderson entered with a 5.14 ERA in three starts during the daytime this season.

Phillies: After a day off Friday, RHP Vince Velasquez (2-1, 4.33) takes the mound for the start of a two-game interleague series against the New York Yankees on Saturday night.