Sixers rookie Markelle Fultz to miss 3 games, then be re-evaluated 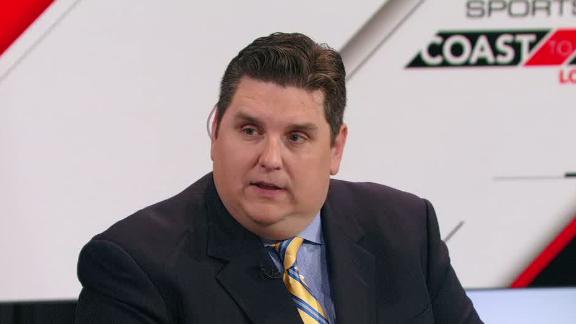 Philadelphia 76ers guard Markelle Fultz, who has been hampered by discomfort in his right shoulder,will miss the next three games, the team announced Wednesday.

Agent Raymond Brothers told ESPN on Tuesday that Fultz "literally cannot raise up his arms to shoot the basketball" because of the discomfort. He also told ESPN that the former No. 1 overall pick had a cortisone shot on Oct. 5.

The Sixers issued a release Wednesday saying Fultz will not play in Wednesday's home game against the Houston Rockets, as well as road games against the Dallas Mavericks (Saturday) and Rockets (Monday).

He will work out and travel with the team until he is re-evaluated Tuesday, the team said.

"I think that it's appropriate to take a step back, let him take a breath and get him healthy and ready to resume play hopefully next week," Sixers general manager Bryan Colangelo said Wednesday.

"No one's panicking inside. The sky's not falling. Markelle Fultz is going to be a great basketball player for this organization, and we're confident that we're going to get this thing resolved."

Colangelo said there is no structural damage to the shoulder. He said that, in addition to the cortisone shot, Fultz met with a shoulder expert Tuesday, has gone through "a couple of scans, couple of ultrasounds" and is doingphysiotherapy treatment. Cortisone shots are used to relieve pain and inflammation, and Sixers officials confirmed to ESPN's Adrian Wojnarowski that Fultz's inflammation and symptoms have improved.

"We are going to take a little different course of approach, as we embrace this next week and try to get him right," Colangelo said. "There's been a lot of noise out there about the pain, about the shot, we're just hopeful we can get this resolved once and for all."

The Sixers have been working with Fultz on his shooting mechanics, which have been altered with the shoulder irritation.

"There was never a concerted effort on the part of the organization to change his shot," Colangelo said, adding it was Fultz's choice to continue to play through the pain in his shoulder.

"There was no medical reason not to play him," Colangelo said. "He was cleared to play and he wanted to play. That's why he was playing. His reluctance to shoot, obviously his shot mechanics have been affected by whatever's going on, or vice versa."

Fultz, 19, has struggled to shoot the ball in his first four NBA games, resisting jump shots and relying almost exclusively on drives to the basket. He is shooting 33 percent (9-of-27) from the floor and 50 percent (6-of-12) from the free throw line. Off the bench, he has averaged 19 minutes.

"It's become very obvious he just hasn't been willing or committed to shooting outside of the paint," Colangelo said. "We're trying to work on that."

The Sixers traded the No. 3 overall pick and a future first-round choice to the Boston Celtics for the chance to select Fultz with the No. 1 overall pick. Fultz played one season of college basketball at the University of Washington.

ESPN's Adrian Wojnarowski and Jackie MacMullan contributed to this report.

Windhorst puzzled by Fultz's shoulder injury
Brian Windhorst calls the lack of communication between Philadelphia and No. 1 overall pick Markelle Fultz "unusual" in regards to his should injury.