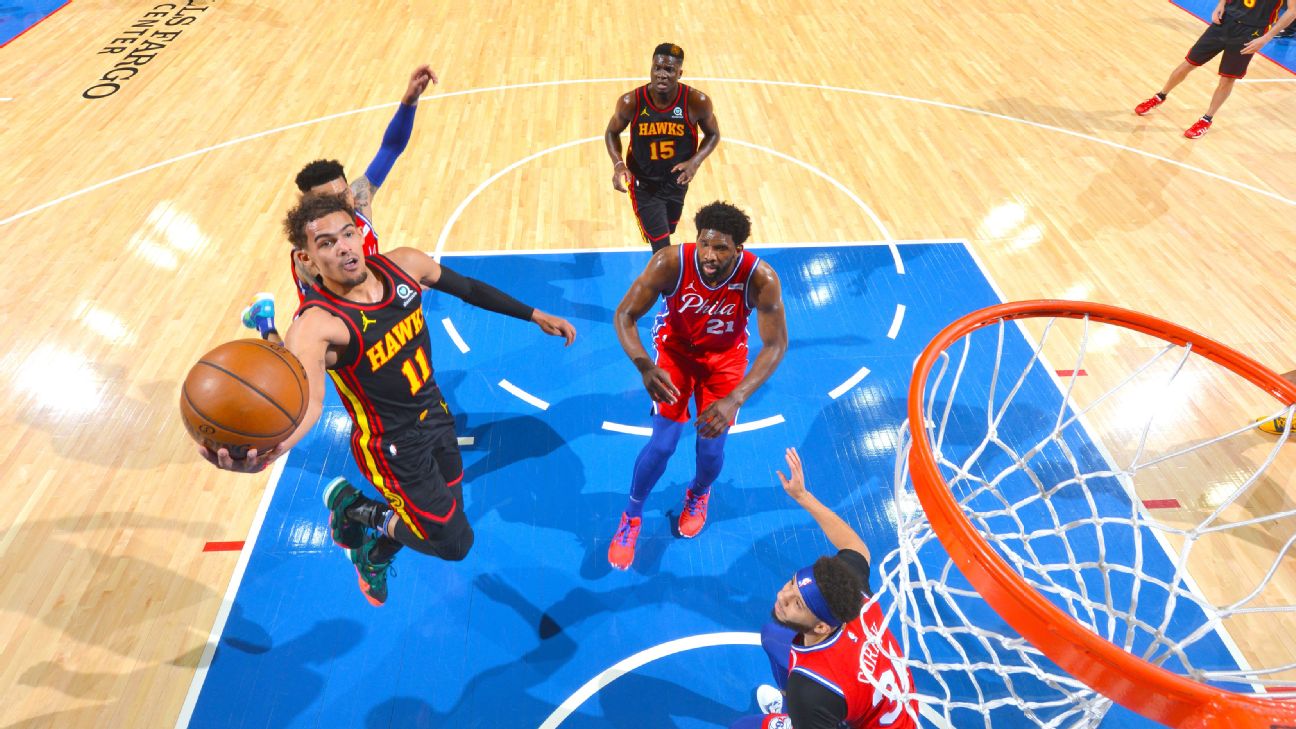 The Philadelphia 76ers had seen enough in the first half, when the Atlanta Hawks bludgeoned them 74-54 behind 25 points and seven assists from Trae Young.

As he did to Reggie Bullock and the rest of the New York Knicks backcourt in the Hawks' first-round victory, Young diced up Danny Green in single coverage prior to intermission. While the Sixers made it a game late by unleashing intense ball pressure on the Hawks, whatever concerns Atlanta might have about its iffy execution in the closing minutes of its128-124 Game 1 win over Philadelphia, the Sixers have far more to concern themselves with in the matter of how to guard Young.


There's no right way to guard Young, only a menu of bad options.

The Hawks' double-drag screen action with center Clint Capela and power forward John Collins screening high for Young is tailor-made for Young's talents: the floater, the lobs, the ability to draw contact against off-balance defenders at the point of contact, and his capacity to fire up a jumper from any distance.

Young exploits not only a defender's weaknesses, but his strengths too. Witness any aggressive on-ball defender who tries to blow up a screen for Young, only to hear the referee whistle him for contact. And while it's easy to prioritize getting the ball out of Young's hands, a defense has to extend out to 35 feet to do it, which is suboptimal. It's simply impossible to home in on a single tactic without exposing a vulnerability elsewhere.

Sixers head coach Doc Rivers acknowledged the challenge postgame with a dash of gallows humor when asked if he had any thoughts in the first half about deploying Ben Simmons on Young or other strategies.

"We had a lot of thoughts," Rivers said. "We probably thought of all of them."

Rivers noted that there were multiple diagnoses for Young's first-half explosion: Broadly speaking, the coverages weren't well-conceived; the Sixers' defensive rotations weren't sharp after Young turned the corner or made the pass; Green struggled when Young rejected screens (the Hawks beat up Green for eight points on three first-half rejections by Young).

"Danny's been pretty good on small guards all year," Rivers said. "But Trae's not just a small guard -- he's a terrific guard."


When the Sixers returned to the floor for the third quarter, they changed up their defensive game plan on Young.

"They started with Ben on him," Hawks guard Kevin Huerter said. "They blitzed some of his ball screens. A lot of it was to try and get the ball out of his hands. [Young] did a great job. We're really effective when we move the ball and make extra passes. We get the ball moving side to side and we can make 3s."

In the opening two minutes of the second half, Young threaded the needle of a hard trap by Simmons and Tobias Harris 30 feet out on the right sideline to find Collins for a wide-open 3-pointer.

On the very next possession, when Embiid joined Simmons to trap Young at the same spot, Capela slipped to the foul line, where Young hit him. Though Capela missed the close-range shot, he had no trouble gathering the miss against Sixers guard Seth Curry and converting the putback.

A few minutes later, after Matisse Thybulle entered the game to serve as the primary defender on Young, Huerter was the beneficiary of Young's playmaking out of a trap, catching a kickout pass to the weak side before draining an open 3-pointer.

Traps might seem like kryptonite on dynamic playmaking guards, but Young loves to see them. During the regular season, Young tormented trapping defenses to the tune of 114.3 points per 100 chances in the half court (and an even more outlandish 118.5 points on possessions when either he or the recipient of the first pass attempted the shot).


Accordingly, the Sixers sent multiple defenders at Young 15 times in the second half on Sunday, according to ESPN Stats & Information research. While Young attempted only one field goal in those 15 instances, the Hawks went 7-for-11 overall from the field for 19 points.

The length of Simmons and Thybulle slowed Young a tad in the second half, as he spent more time moving east to west, in contrast to his north-to-south commutes before halftime. Young's reading proficiency of the court rates off the chart, but it's a tougher exercise against taller defenders. Both Rivers and Simmons were salty about how the Sixers' defenders were officiated against Young, who loves using a defender's physicality against him.

There likely isn't a singular solution to the problems Young presents. Harris suggested that the Sixers will "mix it up" in Game 2, throwing a variety of schemes and defenders at the Hawks' catalyst.

Philadelphia might also want to explore not just getting the ball out of Young's hands, but keeping it out with strong denial from a defender like Thybulle and giving him no other help assignments. A couple of opponents -- including the Charlotte Hornets -- even used elements of Dean Smith's "run-and-jump" pressure defense to successfully disrupt Young during the regular season.

But however the Sixers choose to proceed, they're now deep into a game of Whac-a-Mole against a brilliant offensive player who seems to have a counter for just about everything. 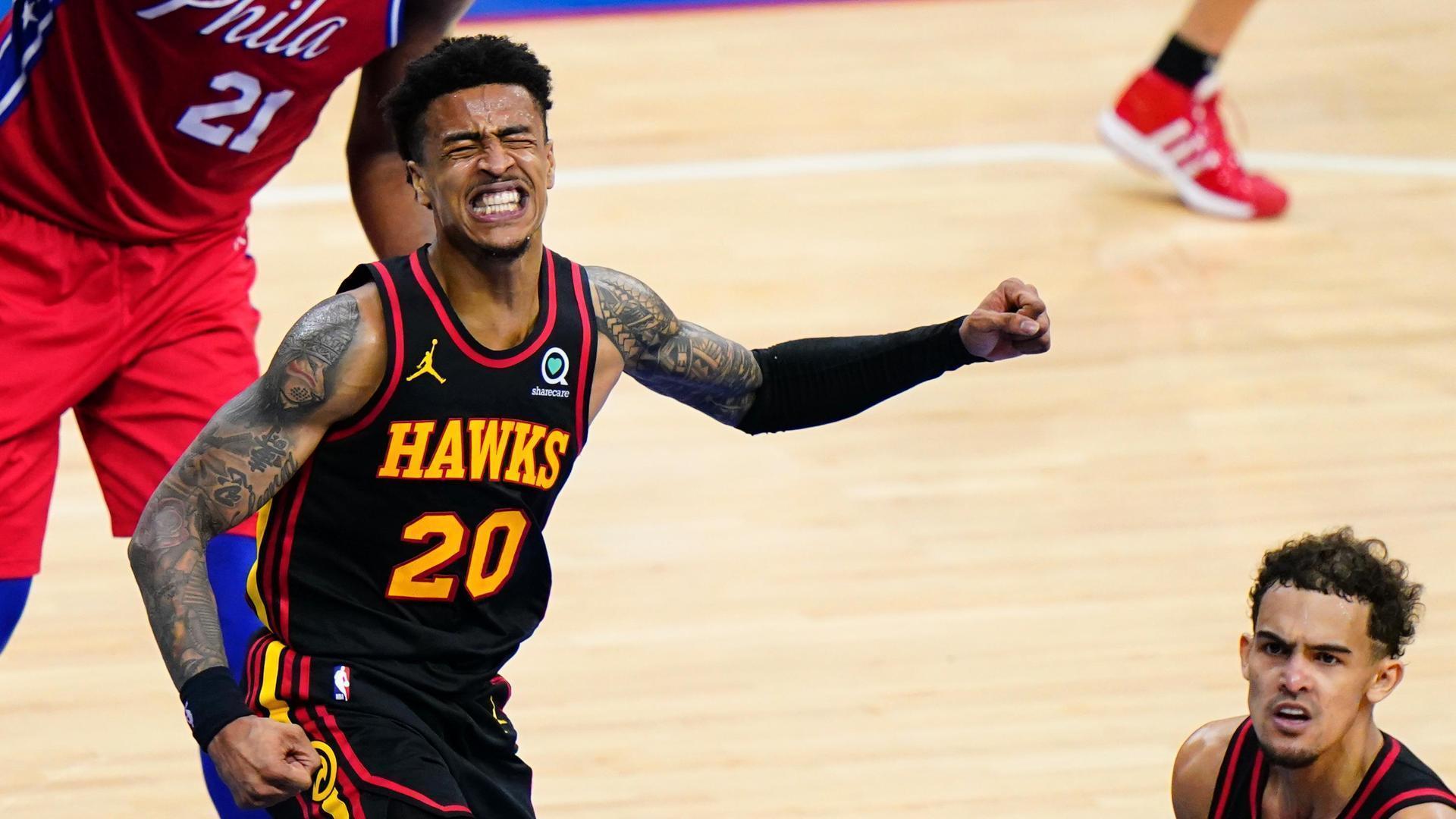