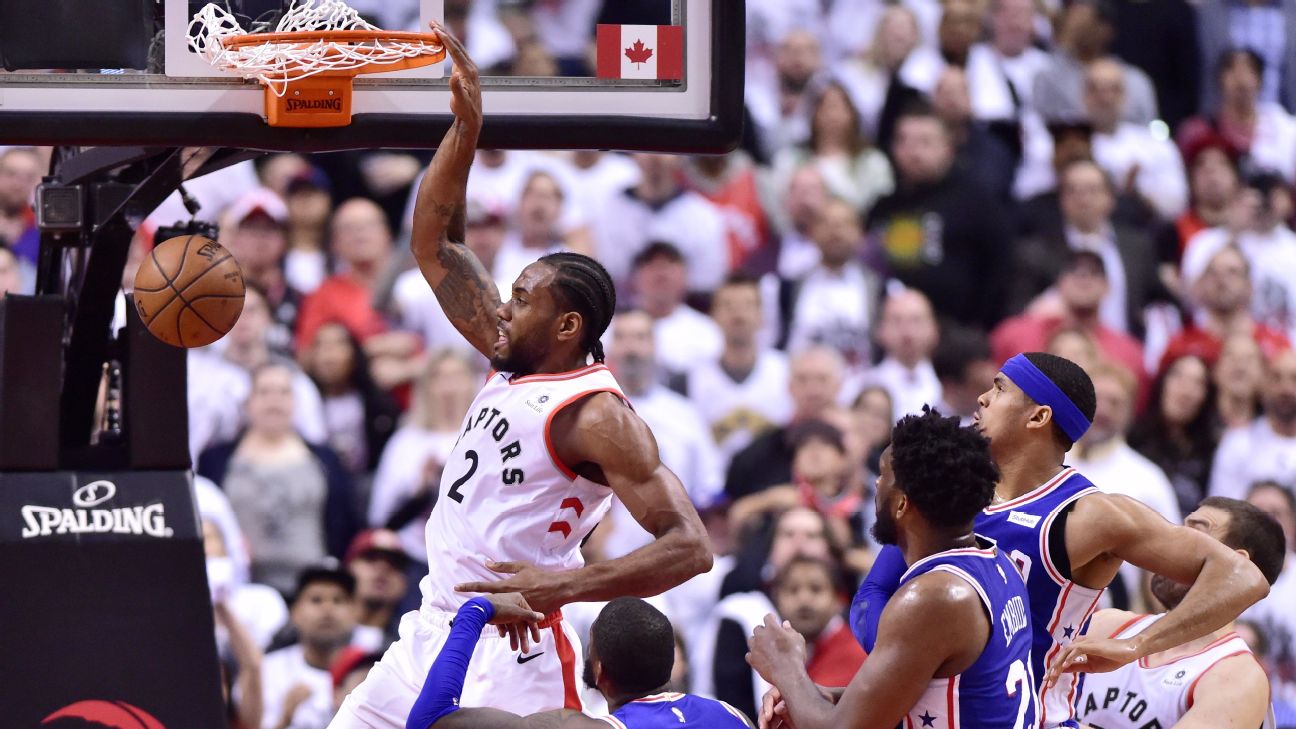 TORONTO -- The Claw was out early on Tuesday, first with his patented grab-away from Ben Simmons on the game's first possession, then with a deflection on the next trip down the court that resulted in a Philadelphia 76ers turnover. The Claw grabbed 10 rebounds in the first half, and he even sent one of his teammates to the locker room for stitches after knocking him in the forehead with an elbow.

But as much as Kawhi Leonard added Tuesday to one of the most impressive individual postseason résumés in NBA history, the Toronto Raptors' resounding 125-89 Game 5 victory over Philadelphia was a collective statement by the Raptors. A supporting cast that has been promising to help its transcendent superstar delivered in a multitude of ways.

"The way we played tonight -- I'd love to play like this every night," Leonard told ESPN.com. "I'm pretty sure everyone else feels the same way. They all want to contribute. There are not guys on this team who just want to sit back and relax and watch either me or Kyle [Lowry] or Pascal [Siakam] just being great. Everyone wants to play great."

Leonard's exceptional play in the postseason might be an unfair standard to which to hold his teammates. Prior to suffering a right calf contusion in Game 3, Siakam's athletic stylings and range from the corners had provided consistent offense for Toronto. Furthermore, the Raptors feature a core of heady veterans such as Lowry, Marc Gasol and Danny Green, whose contributions aren't always easily quantified in stat lines. By nature, these are cerebral players who have mastered the art of contributing without scoring, and what often looks like a dud in the box score is an exercise in winning on the game's margins.

Still, the disparity between Leonard's production and the rest of the team was profound. Coming into Game 5, Leonard had scored 38.8 percent of the Raptors' points in this series -- far and away a larger share than any other individual player in the conference semifinals (Kevin Durant and James Harden are next, at 32 percent). After the Raptors were embarrassed in Game 3, Lowry told ESPN's Tim Bontemps, "We've got to help him."

Help came early and often Tuesday, and every member of the team was, in some form or fashion, the best version of himself.

"We needed this type of game where everyone played well," Lowry said. "I don't think we had a game like this in a while. We've still got another level that I think we can play at offensively and defensively. But it was a good team win."

From the outset, the Raptors were treated to vintage Lowry: He scored 19 points, grabbed six rebounds and dished out five assists, but more importantly, he was driving hard to the hole, drawing contact, gobbling loose balls in traffic and contributing grunt work, such as a back screen on Joel Embiid that gave Leonard the runway for his emphatic driving dunk just before halftime.

Less than three days after being listed as doubtful for Game 4 as he nursed a right calf contusion, Siakam led all scorers with 25 points. Although he didn't have his normal propulsion when elevating, Siakam unleashed his off-the-dribble exploits, worked his way to the line for 10 attempts against a Sixers defense that was a step slow and converted two of seven from long range.

For the second consecutive game, Gasol looked like the offensive fulcrum who for years roosted from the high post in Memphis, initiating offense with his creativity and instincts. He finished with 11 points -- one of six Raptors in double figures -- drained three of five attempts from beyond the arc and dished out three assists. The two-man game between Gasol and Leonard continues to develop, with dribble handoff action and Gasol helping Leonard find gaps on the floor in the pick-and-roll.

A primary factor in the Raptors' team-wide success in Game 5? They spent a quarter of their possessions in transition, according to Cleaning the Glass. There was no greater beneficiary on the Toronto roster than Green, who scored 17 points, 12 of them on four 3-pointers launched in the first eight seconds of the shot clock, according to Second Spectrum data.

"Us pushing the pace gives us open, uncontested looks, more rhythm looks," Green said. "So I think it helped a ton."

For the Raptors' bench, which had struggled for much of the series, Tuesday was a collective breakout. Fred VanVleet canned his first 3-pointer of the series after going 0-for-7 from deep the first four games, andSerge Ibaka enjoyed his second consecutive outing in which he affected the game on both ends.

Much of that work occurred after he took a shot from Leonard in a scrum for a rebound in the first quarter. As blood poured from his forehead, Ibaka returned to the Toronto locker room, where the Raptors' medical staff sewed him up with three stitches. Upon his return, Ibaka was a key defensive presence for the Raptors, and he turned in another solid offensive showing, with 10 points on 4-for-7 shooting from the field.

"He came back in playing good, right?" quipped Leonard, noting that the shot was unintentional. Ibaka shouted across the locker room that he expects Leonard to pay for plastic surgery. Leonard countered that his teammate has an outstanding debt from which the cosmetic touch-up can be deducted.

Although this was Leonard's least impressive game of the series statistically -- a mortal 21 points on 7-for-16 shooting from the field, along with 13 rebounds -- he was in a cheery mood postgame after receiving some routine treatment. He noted that as unsightly as the knock to Ibaka's head was, it was fitting that it came in a fight for a rebound, which has been a point of emphasis for Toronto. The Raptors rank last among remaining playoff teams in rebounding rate, but Tuesday's effort was one of their best on the glass this postseason.

Leonard is well aware of the scoring load he has assumed for the Raptors, but he rejects the notion that it is accompanied by any undue pressure.

"All of life is pressure, but at this time, I'm having fun," Leonard told ESPN.com. "I've been in the tough battles, played the greatest teams, been to the Finals. I'm just in a moment having fun. I think that's what you've got to do. I've got to enjoy this, enjoy this NBA. I don't want to look back and say, 'Damn. I was too stressed or too locked in to have fun and play the game I've got to play.'

"That's what I've learned from my past, and that's what I take in every game: just going out there and having fun but competing my ass off and leaving it all out there to try to win a game." 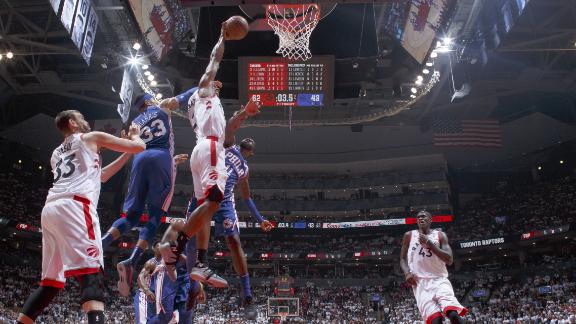 Raptors blow out 76ers in Game 5
The Raptors protect home court as they cruise past the 76ers 125-89. 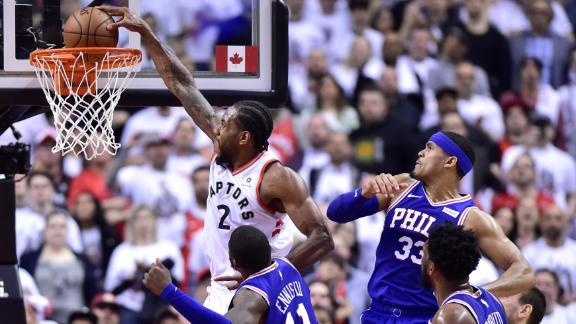