The sophomore breakout player for each Top 25 team 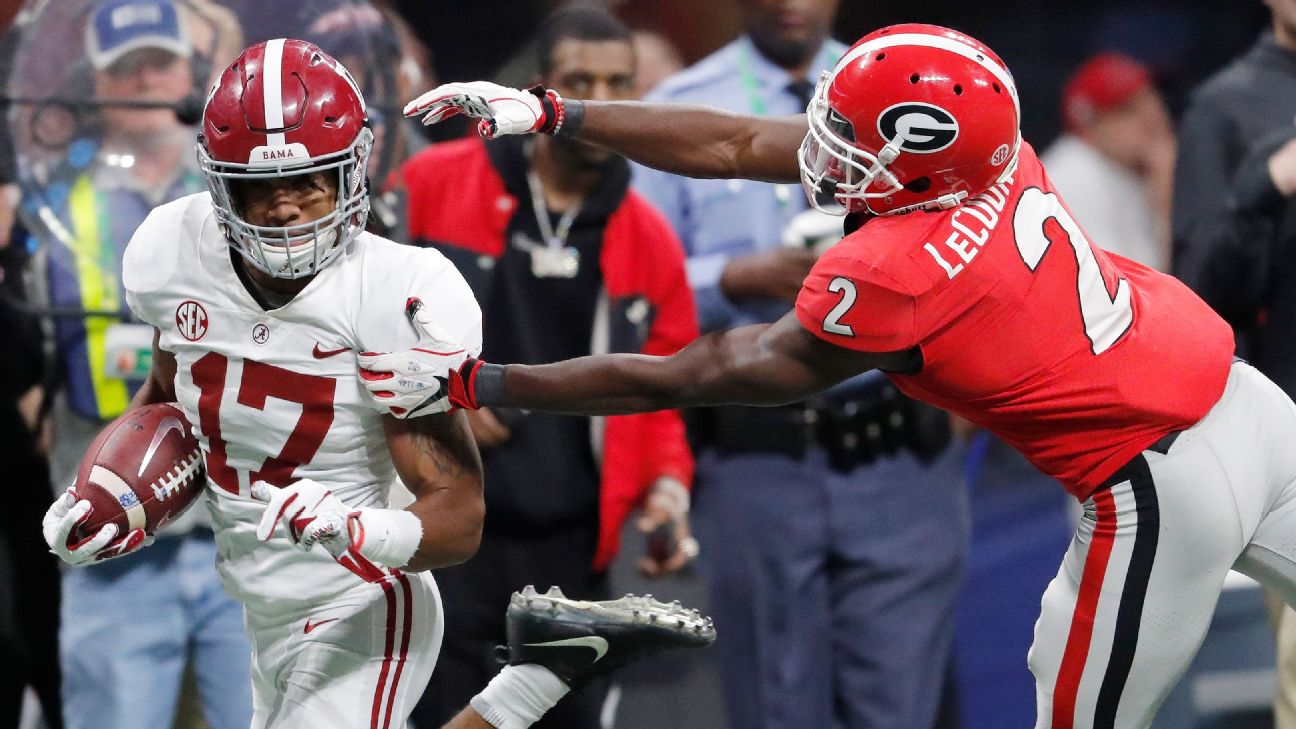 Sometimes even the most elite freshman needs a season of college football under his belt. So which sophomore on each Top 25 team is ready for stardom?

Here's a look at the top second-year players from Clemson to Mississippi State in our post-spring power rankings.

Fans got a taste of the ferocity Thomas brings to the pass rush last season when the freshman had his share of big plays in a backup role, including nearly decapitating Syracuse quarterback Eric Dungey to secure a victory. But now that the stars of Clemson's defensive line are off to the NFL, it's Thomas' time to shine, and he's likely to blossom into a superstar. -- David M. Hale

It's easy to get swept up by what a stellar trio of Tide receivers accomplished as sophomores. Whether it's Biletnikoff Award winner Jerry Jeudy, speedster Henry Ruggs III or national championship hero DeVonta Smith, there's a lot to like. They even have some awesome nicknames. But don't overlook a fourth standout: Despite his true freshman status and despite the depth ahead of him in 2018, Waddle managed to haul in the second-most receiving yards on the team (848) and tied for the third-most touchdowns (seven). In Ruggs and Waddle, Alabama might have the two most explosive receivers in the SEC. -- Alex Scarborough

With Jonathan Ledbetter and Jay Hayes gone, who's next on the D-line for the Bulldogs? Look no further than Davis, who quietly had a stellar freshman campaign. Despite not arriving until the summer, he played in 11 of 14 games, starting four. And while it's true he didn't light up the stat sheet with 25 tackles and 1.5 sacks, as an interior lineman that's not an accurate measure of his performance. What is? How about earning a spot on the coaches' freshman All-SEC team? At 6-foot-6 and 330 pounds, Davis has the size and strength to anchor Kirby Smart's defense for years to come -- Scarborough

Humphrey is the lone returning starter for an offensive line named best in the country last season. Humphrey is the perfect anchor for the Sooners as they attempt to retool up front. At 6-foot-5, 325 pounds, Humphrey is massive for a center, and should warrant preseason All-America consideration after a dominant first season in Norman. -- Jake Trotter

Those who watched last season's Michigan game got a good preview of what Olave can do for the Buckeyes. His two touchdowns gave him a taste of success heading into 2019, a year in which Ohio State has to replace most of its starting receivers. -- Dan Murphy

Offensive coordinator Chip Long called Patterson one of his best offensive linemen last season while he was working in a backup role at tackle. Moving him to center should give Notre Dame a strong anchor in the middle of its line this season, and for years to come if he stays put. -- Murphy

The 6-foot-6 Michigan native played all 13 games as a freshman in the shadow of future NFL draft picks Rashan Gary and Chase Winovich. His older teammates were predicting Hutchinson would be a future All-American after just a couple months on campus last fall, and he'll have a chance to shine as he steps into a starting role this season. -- Murphy

Florida defensive coordinator Todd Grantham didn't hesitate when asked for an under-the-radar player to watch this season. He mentioned Burney right away after a breakout performance this spring. Burney moved from safety to linebacker and ran with the first team in the spot Vosean Joseph made so many big plays from in 2018. Burney is fast and athletic but also physical, and his versatility makes him a big asset. -- Andrea Adelson

When Chaisson went out with a knee injury after the first game of last season, LSU's defense was never the same. Without the hybrid outside linebacker/defensive end, who had a sack, a tackle for loss and a quarterback hurry in the opener against Miami, the pass rush dried up. And while it might not have been apparent how much that was the case for most of the season, against top-tier teams such as Alabama it showed up. And now that Chaisson is back and healthy again, he could make all the difference for a talented defense that also returns star safety Grant Delpit. -- Scarborough

Holland had sort of a breakout last season by leading the Ducks with five interceptions, despite starting in just two games. Now he's a starter for an Oregon defense that should be even better in 2019. He's a leader and an absolute ball hawk on the field. More reps and more time to shine in Oregon's starting lineup could make him one of the country's top defensive backs. -- Edward Aschoff

After being named the Big 12 Defensive Freshman of the Year last season, Sterns figures to be the face of a revamped, though talented, Texas defense. Sterns is a sure tackler with a nose for the ball and he headlines a secondary loaded with former blue-chip recruits. -- Trotter

It's understandable if you were focused too much on Trayveon Williams in the Aggies' backfield. He was a terrific running back. But that doesn't mean you should have overlooked Corbin. The four-star recruit from Florida steadily made his presence felt last season, rushing for 346 yards and a touchdown on just 61 carries. Not only did he earn a spot on the Freshman All-SEC team as a running back, but with 10 receptions and 340 kick return yards, he also earned a spot as the team's all-purpose back. -- Scarborough

Slade was the No. 17 prospect in the 2018 class and has the quickness and elusiveness Penn State wants in its offense. He was limited in 2018 because he had Miles Sanders in front of him at running back as well as quarterback Trace McSorley running the ball 170 times. Slade had only 45 carries in nine games, but still managed 257 yards and six touchdowns. He averaged 5.7 yards per carry and showed flashes of why he was ranked so highly in high school. Both Sanders and McSorley are off to the NFL, so Slade is going to be relied upon in 2019 to keep the run game moving forward. -- Tom VanHaaren

Gilyard is set to take over for stalwart middle linebacker Pat Jasinski, and if the glimpses he showed as a true freshman last season are any indication, Gilyard should make an immediate impact. The highest-rated recruit UCF signed in the 2018 class, Gilyard filled in for Jasinski at times last season when injuries hit, and made some big plays. Against Navy, he had a career-high nine tackles in his first collegiate start. More is expected in 2019. -- Adelson

When you lose just about all 11 starters from your defense, you're looking for any and everybody to step up. Right now, Ngata could help the Huskies in a couple different ways. He moved to inside linebacker this spring and was one of the stars, especially after racking up three tackles for loss, including two sacks, in the spring game. He's a tweener at linebacker, and he'll also be able to help out on the outside this fall. -- Aschoff

The Utes return their top receivers from 2018, but keep an eye on Thompson. He played in four games late last season after recovering from an injury and caught just one pass for 31 yards. But after a very successful spring, he's in line to start at the X receiver spot for the Utes this fall. -- Aschoff

The Cardinal will try to replace star receiver JJ Arcega-Whiteside by committee this fall. St. Brown has the potential to be a playmaker for Stanford if he can live up to his potential. He caught only eight passes last season, but four of them went for 45 yards or more. St. Brown has the ability to take the top off a defense when he really gets going. -- Aschoff

You might have missed him since the Tigers weren't in contention late last season, but Whitlow was one of the few bright spots in Gus Malzahn's offense. When he was available -- and that was an issue -- he was terrific, rushing with the kind of speed and power reminiscent of Kerryon Johnson. All told, Whitlow rushed for 787 yards and six touchdowns, not to mention the 15 catches he had for 173 yards and two scores. -- Scarborough

Believe it or not, we should probably be paying attention to a young running back in Pullman this fall. Borghi replaces the departed James Williams, and he's a tough runner who registered 740 yards of offense with 12 touchdowns last season. He also averaged 5 yards per carry and could be a very solid bell cow back for the Cougs in 2019. - -- Aschoff

Martinez technically had a breakout 2018, but it was really for half of the season. He dealt with an injury, and the Cornhuskers lost their first six games as Martinez was adjusting to the college game. After the slow start, Nebraska won four of its final six games and was in a back-and-forth battle with Ohio State before losing 36-31. Martinez showed at the end of the season that he can be something special in Scott Frost's offense. -- VanHaaren

Wisconsin has depth at cornerback, but Wildgoose is making it difficult for the coaches to keep him off the field. He eventually cracked the starting lineup in 2018 for the final seven games, recording 29 total tackles and leading the team with seven pass breakups. He has some competition at the position, but if he can build off the latter half of last season, he should be able to make a big impact in 2019. -- VanHaaren

The Orange offense waves goodbye to leading receiver Jamal Custis, but Harris looks poised to step in and fill the void. Harris set the school record for receiving by a true freshman last season, catching 40 passes for 565 yards and three touchdowns. His role will grow this season, and he figures to be a dangerous weapon on the outside along with transfer Trishton Jackson. -- Hale

Merriweather committed later in the 2018 recruiting class, but he looks like a typical Iowa defensive back at 6-foot, 210 pounds, with some range. He played in nine games last season as a true freshman and now could be one of the starters at safety alongside Geno Stone. Merriweather has said Stone has taken him under his wing, and that could pay off for the secondary in 2019. -- VanHaaren

Fast-developing Smith is primed to take over as a starter in Army's rugged defense at inside linebacker. Smith is one of the hardest hitters on the team, and figures to bring a physical presence to the Army front seven. -- Trotter