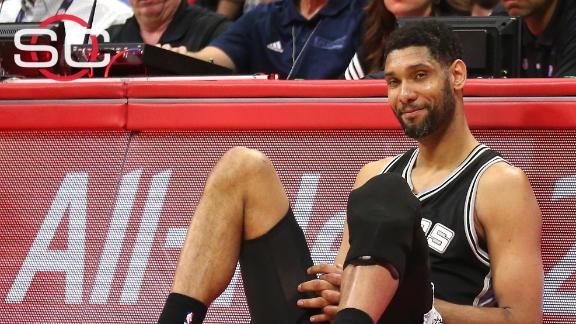 "Finally had a chance to talk with [Spurs coach Gregg Popovich]," Duncan told the San Antonio Express-News on Thursday. "I'll be on the court next year."

Duncan's return was widely expected, but the news comes at a key time of the offseason, with the Spurs looking to upgrade their roster to load up for a potential title run.

In the first two days of free agency, the Spurs have verbally agreed to terms to retain two of their key players, Leonardon a five-year, $90 million maximum contract extension and shooting guard Danny Greenon a four-year, $45 million deal. San Antonio also has shed salary to help free up room for a potential maximum offer to Aldridge by tradingcenterTiago Splitter to the Atlanta Hawks and seeing centerAron Baynesagree to a three-year deal with the Detroit Pistons.

Despite San Antonio's early exit from the postseason, Duncan earned recognition in May for making the All-NBA third team, marking the 15th time he's made one of the All-NBA teams and tying a league record also shared by Kareem Abdul-Jabbar and Kobe Bryant.

Duncan contributed a 13.9-point scoring average in his 18th NBA season while averaging 9.1 rebounds, 3.0 assists and 1.96 blocks per game, which ranked No. 8 in the NBA. Duncan's 1.96 blocks last season ranked as the highest average in that category for a player 38 or older since 1973, when the NBA started tracking blocked shots. Duncan was also the first player in league history age 38 or older to average at least 13 points and nine boards in a season.

In the immediate aftermath of San Antonio's loss to the Los Angeles Clippers in Game 7 of their first-round series, Popovich indicated he, Duncan and Manu Ginobili would likely return for the 2015-16 season.

"People ask me about Tim and Manu and myself for the last five years, what we're going to do," he said. "It's all psychobabble. I have no clue. We'll probably come back. Paycheck is pretty good; you think I'm lying."

Popovich has indicated in the past that he would walk away once Duncan retired.

Spurs general manager R.C. Buford told ESPN the organization was "not going to rush them [to make a decision]," adding that, "They'll have time to talk amongst themselves, and we'll have time to listen to what they're saying and act accordingly."

Having competed in 1,572 games and 241 contests in the postseason, Duncan was expected to ponder his decision to return for the majority of the summer. Ginobili has said Duncan's decision could impact whether he returns for the upcoming season. Ginobili also has said that he will announce his decision in La Nacion, anArgentine newspaper.

"I continue to be amazed by Tim Duncan," Popovich said in May. "He was our most consistent player in the playoffs, at 39. He needed a little more help. I feel badly he didn't get it."