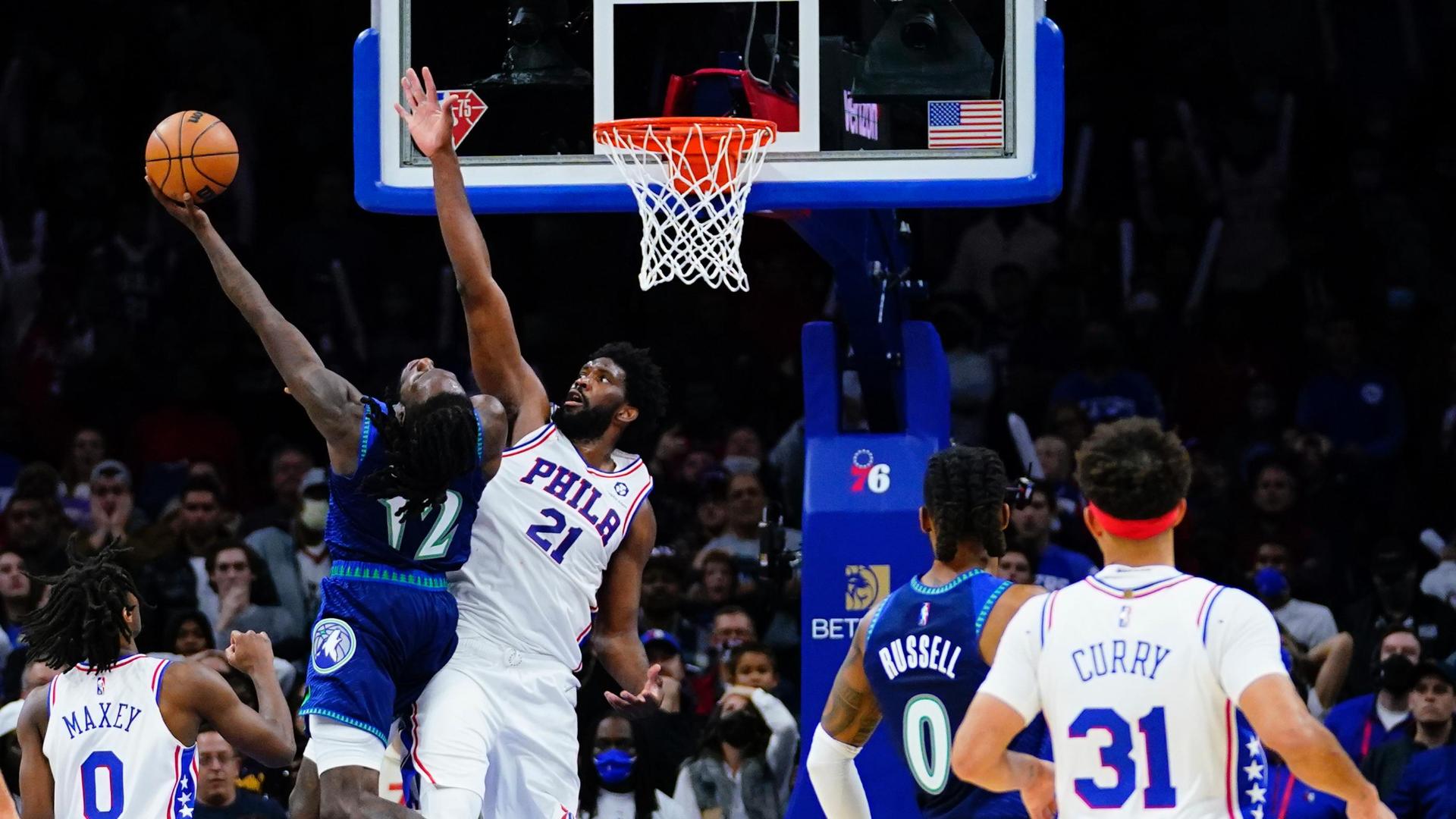 PHILADELPHIA -- - D'Angelo Russell scored 35 points and had a decisive steal and assist in the final seconds of the second overtime in the Minnesota Timberwolves' 121-120 victory over Joel Embiid and the Philadelphia 76ers on Saturday night.

Embiid had 42 points and 14 rebounds in his return to the lineup after missing nine games because of COVID-19 protocols. Philadelphia lost seven of those games without the four-time All-Star and has now dropped eight of 10.


"I really thought I wasn't going to make it," Embiid said. "It was that bad. So, I'm just thankful to be sitting here. I'm just glad I got over it."

Tobias Harris returned from a two-game absence due to a hip injury to add 17 points and nine rebounds for Philadelphia.

"It's good to have Embiid back," he said. "We missed him for sure."

Russell also made a go-ahead 3 late in the first overtime. Karl-Anthony Towns added 28 points and 10 rebounds but didn't play in the extra sessions after fouling out, and Anthony Edwards had 19 points. Minnesota has won six of seven.

"That was probably one of the best (Russell) performances I've ever seen," Towns said. "Multiple times we could've let go of the rope. We just made it our night. Instead of hoping the game came to us, we took the game. I'm just very proud of the way we played."

Embiid scored all seven of Philadelphia's points in the second overtime, and his 12-foot baseline jumper put them up 120-117 with 1:58 to play. Naz Reid's layup pulled Minnesota within a point with 30.8 seconds left.

Then, Russell stole Tyrese Maxey's pass that was intended for Embiid before assisting on Taurean Prince's driving layup that put the Timberwolves up a point.


"I wanted to adjust because they kept running that same play," Russell said. "I just tried to keep my hand down there and anticipate the bounce pass and we got it when it mattered. (On the assist), I saw him running and saw the clock. We could put the pressure on them and get a layup and (Prince) is more than capable of making a layup, and he happened to make one of the most important ones of the game. It's just trusting teammates."

Philadelphia had one last chance to win it, but Edwards blocked Embiid's 3-point attempt at the buzzer.

"Joel was phenomenal tonight, but we still lost the game," 76ers coach Doc Rivers said. "Give him credit. He's obviously been working out."

Timberwolves: Patrick Beverley (left abductor strain) missed his second straight game in what is expected to be at least a two-week absence after getting injured in Wednesday's 113-101 win over Miami.

76ers: Shake Milton (groin soreness) didn't play. ... Harris returned after missing the last two games with a sore left hip. ... Danny Green also was in the lineup for the second straight game. He had missed seven of the previous 11 contests with left hamstring tightness.


Timberwolves: Coach Chris Finch grew up a 76ers fan in his hometown of Reading about 65 miles northwest of Philadelphia. "I used to tell Kevin McHale all the time I used to come down here on Sundays at the Spectrum and boo him," Finch said. "This was my team growing up. It was a heck of a time to be a fan in the late '70's into the mid-80's. Dr. J was my favorite player growing up." ... Won for the first time against Philadelphia since Nov. 17, 2016, snapping an eight-game losing streak. ... Naz Reid finished with 15 points.