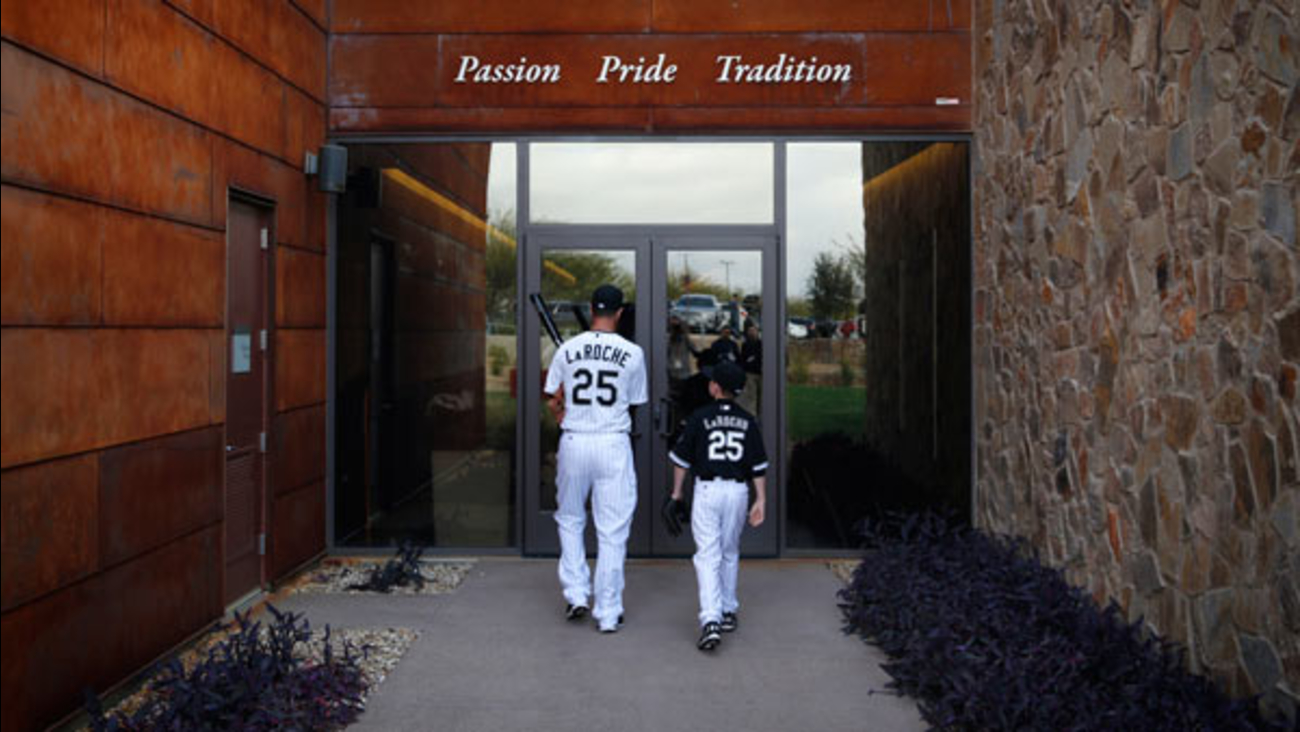 PHOENIX -- Told to cut down his son's time in the clubhouse, Chicago White Sox first baseman Adam LaRoche took a different path: He said he planned to retire and walk away from a $13 million salary.

White Sox President Kenny Williams confirmed Wednesday that he twice asked LaRoche in the last week to "dial it back" with his 14-year-old son.

Williams said Drake LaRoche was a "quality young kid" and not a distraction. But he indicated he didn't want anything to deter the team's focus this season.

"Sometimes you have to make decisions in this world that are unpopular," Williams said before Chicago played Milwaukee.

Thank u Lord for the game of baseball and for giving me way more than I ever deserved!#FamilyFirst

The situation quickly bubbled up around spring training and was likely to stir debate beyond the sport. At issue, what's a proper take-your-kid-to-work environment?

No word, yet, on what LaRoche would ultimately do or how the White Sox would fill his spot if he never comes back.

The 36-year-old said Tuesday that he abruptly planned to leave the game. White Sox general manager Rick Hahn termed it a "personal decision" without elaborating and LaRoche was asked to reconsider.

LaRoche drew plenty of support from fellow players. He's is in his second year with the White Sox, his sixth team overall.

"Good for you Roche!" tweeted former teammate Bryce Harper, the reigning National League MVP. "Nothing like father and son in the clubhouse..It's a FAMILY game."

Good for you Roche! Nothing like father and son in the clubhouse..It's a FAMILY game #FamilyFirst

LaRoche knows about that. He grew up in a big league setting, his father and brother both played in the majors.

All over baseball, it's been big league culture to see sons in the clubhouse and on the field with their dads for early pregame practice. Ken Griffey Jr., Cal Ripken Jr. and Prince Fielder are among the many stars who came up that way.

Different teams have had different rules. Some clubs allowed kids in the clubhouse after Sunday games, provided they won.

"On our side of things, I think everyone would say we enjoyed Drake LaRoche in the clubhouse and everything he brought to the clubhouse," White Sox outfielder Adam Eaton said. "He helped out around and wasn't a burden by any stretch of the imagination. He wasn't a big problem last year, either."

"Adam and Drake are probably the most respected people in baseball I ever played with. Drake would clean cleats, he would help out in drills, pick up baseballs when we needed, he didn't say boo to anybody and was never a trouble in the clubhouse," he said.

Said Williams: "I want to be very clear on something. It's not because the young man was a distraction, not because he wasn't well-received or well-liked by players management and everyone else."

"He's a quality, quality young kid that one day might be a heck of a player one day," he added. "Anyway, one of the things we said coming into this season is 'let's check all the columns' with regards to our preparation, our focus to give us every chance to win."

That led to Williams speaking with LaRoche, who hit only .207 with 12 home runs last season.

"To have his child on the field 100 percent of the time, and that's kind of where we were, every day, yeah, I asked him initially just dial it back. Even 50 percent is probably too much, but there is a wide range between zero and 50 percent," he said.

"I was a little surprised at the stance that he took. It's unfortunate. But talk about a quality decision, a life decision and a family decision. He talked about being there for his family and family first and front and center, and I respect and admire that," he said.

The White Sox, out of the playoffs since 2008, made several moves in the offseason in hope of greatly improving their 76-86 record. No telling for sure whether LaRoche will be part of that effort.

"He seemed pretty convicted in his decision," Williams said, adding, "he didn't come back to talk to me about it before he made the decision. I thought there was enough flexibility built in."

Williams emphasized that he thought "it's great" to have kids around a team. "I just don't think it's great every day," he said.
Related topics:
sportsaction news sportsmlbchildrenbaseballu.s. & worldchicago white sox
Copyright © 2020 by The Associated Press. All Rights Reserved.
More Videos
From CNN Newsource affiliates
TOP STORIES