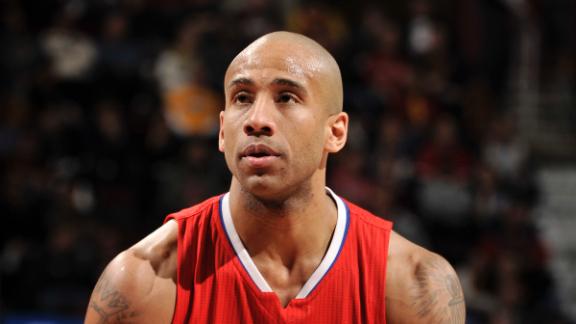 OAKLAND, Calif. -- The rivalry between the Golden State Warriors and Los Angeles Clippers saw another contentious moment Sunday, this time after the final buzzer sounded.

Draymond Green led all scorers with 23 points in Golden State's 106-98 victory over the Clippers. It was an ideal day for the defensive player of the year candidate until his postgame interview with ABC.

During the segment, Clippers guard Dahntay Jones walked into view of the camera, bumping Green as he went past. Green did not take the gesture kindly and told reporters as much in the locker room.

"I think he wanted a reaction from me, but he don't play," Green said, noting that Jones is averaging a career-low 4.6 minutes per game this season.

He added, "If [Jones] gets suspended, they may not even notice."

Green expressed that the bump should warrant scrutiny, saying, "I definitely expect that to be reviewed by the NBA. For him to look at me, look at me again and bump me when I'm doing a postgame interview; that's really smart, too, when it's on ABC. The postgame interview is the highlight of that segment and you bump somebody."

Green wasn't finished with Jones. In explaining the shooting guard's behavior, he said: "He got some camera time, which he needed because there wasn't much celebration from their bench today, so you didn't see him much. He got the camera time he was looking for."

Jones denied that the bump was intentional, telling reporters, "That's not how you bump somebody if you purposely want to bump them."

Should The NBA Fine Dahntay Jones?
The "First Take" crew debates whether the NBA should discipline Dahntay Jones for bumping into Draymond Green during Green's postgame interview after the Warriors' 106-98 victory over the Clippers.

Green On The Keys To Victory
Draymond Green discusses the Warriors imposing their will on the Clippers in Golden State's 106-98 win over Los Angeles.