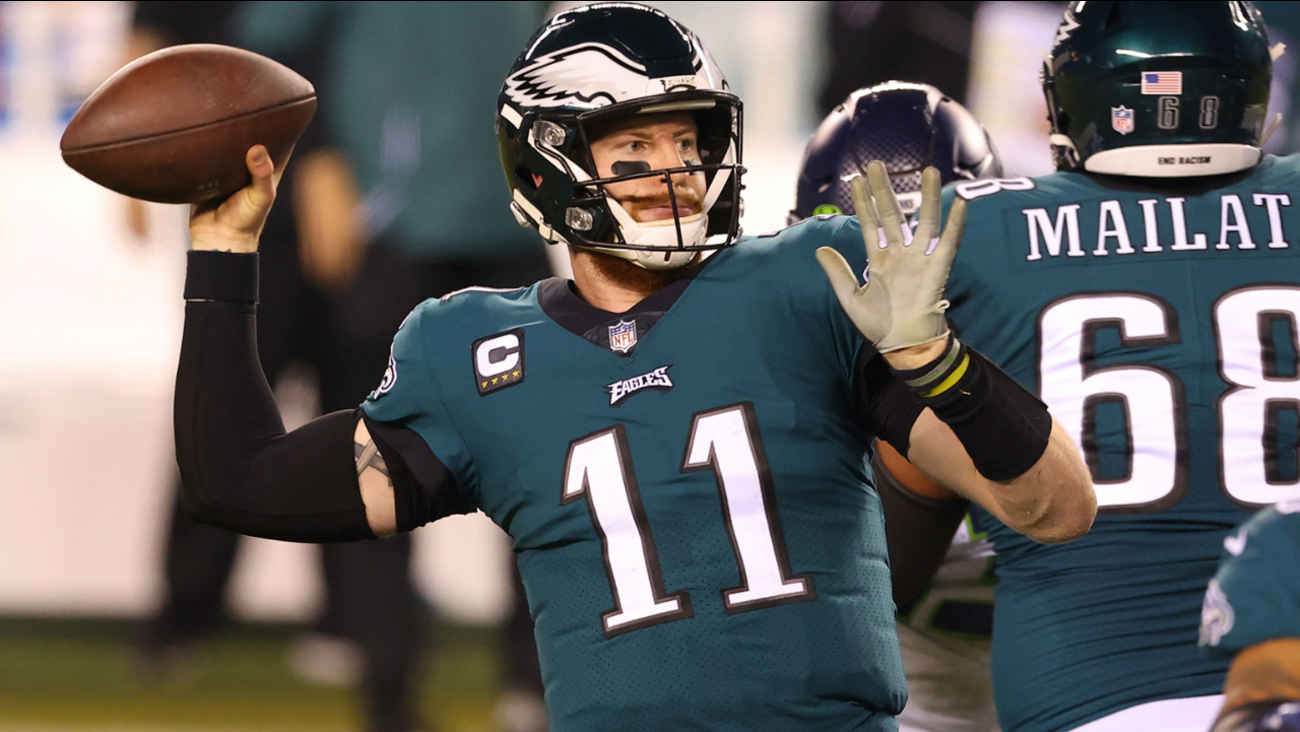 PHILADELPHIA (WPVI) -- Carson Wentz is not pointing the finger. In fact, the Eagles quarterback is the first to point to himself, even though there's plenty of blame to go around for the way Wentz and the Eagles have played offensively. The Eagles are ranked among the worst offenses in total offense, passing offense and points scored.

From injuries to route running mistakes, missed assignments, dropped passes, questionable play-calling and play-calling decisions, the complications on offense are complicated and have led to Wentz throwing a career-high and NFL high of 15 interceptions. But Wentz is not throwing anyone under the bus even though his weapons have accounted for the most dropped passes in the NFL.

Carson Wentz on overcoming mistakes and mistakes made by his Eagles teammates, says he can not be indecisive

"I've got to trust everybody. You can't be indecisive. We're going to trust each other," Wentz said Wednesday.

Of course, Wentz is the first to admit he needs to be better and needs to look in the mirror. The Eagles QB is among the worst quarterbacks statistically in the league, with the most interceptions and most sacks and most off-target incompletions.

"You've got to be introspective. My process never changes. I feel confident in the process. You can't press, try to do too much. You can look at what's holding you back," he said.

Carson Wentz says going home and playing with his 7 month old daughter, who is about to crawl, puts things in perspective

Wentz had three touchdowns and zero interceptions and led the Eagles on an impressive 75-yard game-winning touchdown drive in the fourth quarter.

"It was a very complete game all the way around," Wentz said after studying that game this week as he preps for the Packers again on the road this Sunday afternoon.

To help Wentz and this struggling offense, he will get back his favorite target this week. Pro Bowl tight end Zach Ertz is activated from injured reserve after missing six weeks with a high ankle sprain. The absence of Ertz has been crushing, he has led the Eagles in catches in each of last four seasons.

“It was a very complete game all the way around”

Wentz Had 3 TDs vs. 0 INTs for 113.2 rating in last road meeting at GB@6abc #CarsonWentz pic.twitter.com/rOllXjpSP3

As the losses and pressure mounts for Wentz and this underperforming Eagles team, Wentz says his time away from the game has helped clear his mind.

Wentz smiled Wednesday for the first time in a long time when asked about his 7-month-old daughter. Wentz admits it puts things in perspective when he can go home and play with his daughter, who is about to walk.

Wentz calls it, "a bundle of joy" even if he has to change a diaper or two.

He is hoping he has something to smile about on the field over the final month of the regular season.
Report a correction or typo
Related topics:
sportsphiladelphiaaction news sportsnflphiladelphia eaglescarson wentz
Copyright © 2021 WPVI-TV. All Rights Reserved.
More Videos
From CNN Newsource affiliates
TOP STORIES