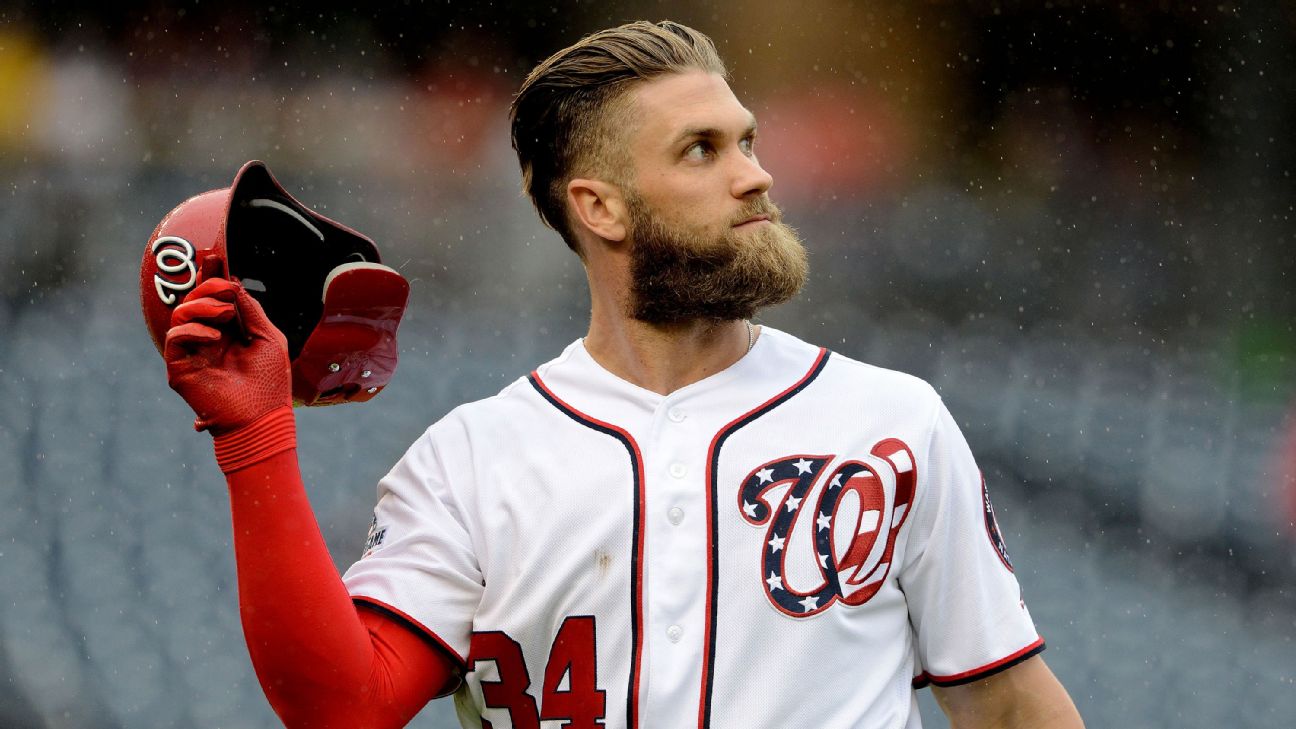 When the offseason began two-and-a-half months ago, the baseball world waited breathlessly to see where marquee free agents Bryce Harper and Manny Machado would sign.

As the saga drags on, we ask three of our baseball writers the burning (smoldering?) questions about where -- and when -- Harper and Machado will finally sign, and for how much.

After what happened last offseason, with J.D. Martinez and Eric Hosmer signing after spring training had already started, not surprised at all. If anything, the only surprise is how few teams have been mentioned as possible suitors. It's not often 26-year-old star players hit free agency, yet most teams apparently aren't interested.

I think back to last year, when many of us were speculating that the slow offseason was due to teams hoarding their money for this offseason. GMs must have laughed when they read that.

In less than a month, the Dodgers have quietly slid from front-runner to borderline "mystery team" status, thanks largely to their deafening radio silence. I'm not buying it. I still think Harper lands in La La Land.

I thought he was headed to the Dodgers after they traded away Yasiel Puig and Matt Kemp to open up right field -- and maybe that will still happen -- but it's looking like Phillies versus Nationals and I'm going to bet on a return to D.C. at this point.

The Dodgers, but it doesn't really feel like we've yet read any Bryce Harper rumor -- with any team -- that feels like a true prelude to the final signing.

All the talk about the Phillies flirting heavily with Harper in Vegas this past weekend could be legit. Or it could be a ploy to make Machado flinch and take whatever Philly is offering. Feels like the latter to me. I still see Manny donning red pinstripes.

The funny thing, it's to the advantage of both players to wait for the other to sign first -- especially if the first one to sign doesn't go with the Phillies. We know the Phillies want one of these guys, and if they miss out on the first one to sign, they may feel forced to increase their offer to the other to make sure they don't get shut out. But who signs first? If Harper ends up choosing the Nationals and that happens first, maybe it will push Machado to the Phillies.

The Phillies. Again, though, given the tone of what's been publicly reported, this feels like trying to forecast the weather nine days out. Feels like the significant steps in the process are still undeveloped.

: Harper's contract will have the higher average annual value, but Machado gets more total dollars. Neither one of them tops Giancarlo Stanton's $325 million deal.

Harper, though with some of the more complicated contracts superstars get these days -- with opt-outs especially -- the total money might not perfectly reflect each player's total earning potential.

About as surprised as I'd be if Machado or Harper ended up hosting this year's Academy Awards.

Not that surprised. Harper to the Nationals seems like a real possibility. Something deep inside could still see the Yankees swooping in at the last second for Harper or Machado, or maybe Machado goes to the White Sox or the "mystery" team that is supposedly out there (the Padres need a third baseman ...).

A little bit, but if they were really committed to signing one of them, it would have happened by now.

About as surprised as I'd be if the Phillies ended up signing neither Machado nor Harper.

The rumors from the Bronx are pretty quiet, but the Yankees are standing on mountains of revenue and while they traded for Stanton last season, they haven't signed a $100 million free agent since Masahiro Tanakaand Jacoby Ellsbury before the 2014 season. That's five offseasons ago. Old man Steinbrenner is yelling from his grave, telling the kids to spend some money and win a World Series. Maybe the Yankees are shying away from Machado for another reason: They want Nolan Arenado next offseason. Perhaps it's not a coincidence they've signed former Rockies teammates DJ LeMahieu and Troy Tulowitzki.

A little bit, but the Yankees obviously can spend a lot of money on either player, and would be better with either player, so it's a logical outcome.

The Stanton acquisition and his huge contract definitely muddied the picture, but certainly a year ago we would have expected the Yankees to land Harper or Machado (heck, maybe both). The Rangers are bad right now, but that's a big-market franchise and they're moving into a new park in 2020. They need a franchise player and Harper in particular would give them a marquee name to get the attention of even football-crazed fans in the Metroplex.

The Angels. If we take some of these rumored offers seriously -- $175 million for Machado, for instance -- it's surprising that there aren't 27 teams bidding for him. Every team in baseball -- or, if you want to be really conservative, at least two-thirds of them -- can afford $200 million for Manny Machado and have intentions of being competitive for many of the next eight seasons.

The Mets. There isn't a whole lot of data on New York's new regime under GM Brodie Van Wagenen, but what data there is suggests this: The Amazin's are in the running for anyone, anywhere, anytime.

The Padres. Or maybe the Angels surprise, like they did with Albert Pujols.

The Braves are ready to contend, need outfield help (Adam Duvall? Really?), and have oodles of payroll flexibility. The only thing that differentiates them from the Phillies is an owner who talks about spending "stupid money." But that doesn't mean Atlanta won't do it.

The Cardinals. They actually have a lot of payroll flexibility in upcoming years and will need a big bat in 2020 and beyond if Paul Goldschmidt and Marcell Ozuna depart as free agents.

Machado, then Super Bowl Sunday, then Harper. Or else they all happen at exactly the same time.