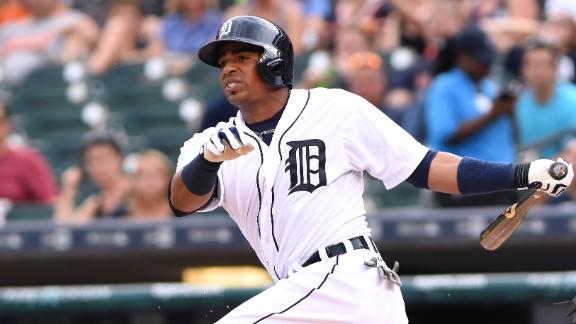 NEW YORK -- Having endured six straight losing seasons and absent from the postseason since 2006, the New York Mets are going full throttle to reverse those disappointments this October.

Cespedes hit .293/.323/.506 with 18 homers with Detroit. He recently went almost six weeks without drawing a walk. He has hit four home runs in his past six games and is slugging .564 in July.

The trade comes on the heels of the Mets acquiring Juan Uribe and Kelly Johnson from the Atlanta Braves and Tyler Clippard from the Oakland Athletics in the past week.

In all, the Mets parted with five minor league pitchers for the four rentals. Fulmer and Casey Meisner, who went to Oakland, were the top arms traded.

General manager Sandy Alderson said the trades underscore that the Mets are not fooling around in their pursuit of a playoff spot, although he declined to suggest it would be a "failure" if the club came up short.

"You always love to get another player because every game that you lose seems to reveal a flaw," Alderson said. "I don't feel complete. I don't know [if] the team appears complete. But I think we've significantly improved the team over the last week or 10 days."

The acquisition of Cespedes largely was celebrated by Mets fans, including high-profile follower Jerry Seinfeld.

The Mets thought they had an agreement Wednesday night to send Zack Wheeler and Wilmer Flores to the Milwaukee Brewers for Carlos Gomez, but New York pulled the plug when team medical personnel offered concern about Gomez's hip.

After announcing the deal for Cespedes, Alderson emphatically slapped aside suggestions that financial issues caused the Mets to balk on Gomez. Cespedes is owed more than Gomez.

"Those issues of salary and everything else unrelated to medical was a total fabrication. Period," Alderson said.

Gomez, subsequently traded to the Houston Astros, took a mild swipe at the Mets on Friday. "They're in second place," he told MLB.com. "I have more chance to win here."

Alderson said talks with the Tigers about Cespedes did not begin until Wednesday, after the deal for Gomez fell apart. Early Friday, the Mets appeared close to a deal with the Cincinnati Reds that would have brought Jay Bruce to Queens for Wheeler. Cincinnati balked late in the process.

"As I think we all found out on Wednesday, a deal's never done until it's done," Alderson said.

When Flores found out via fans during Wednesday's game that he appeared headed to the Brewers, he began crying while manning shortstop. The Mets have made amends with him in person, and Flores wasted little time making the team glad the trade with Milwaukee fell through, hitting a walkoff home run in the Mets' win Friday.

Alderson also intended to reach out to Wheeler to clear the air. However, Wheeler reached out to Alderson first on Friday afternoon. Wheeler told Alderson that he had participated in the rebuilding process and wanted to be part of the club going forward. Alderson said the call from Wheeler "actually had quite an impact" in the decision not to trade him.

Cespedes, 29, will not join the Mets until Saturday. The Mets plan to use him in left field, which could push 2014 first-round pick Michael Conforto back to the minors.

Manager Terry Collins said incumbent left fielder Michael Cuddyer should start a rehab assignment for a left knee injury soon and be activated next weekend. At that point, Collins said, it is conceivable Curtis Granderson may play a decent amount of center field.

Cespedes is in the final year of his contract. He will be playing for his fourth team since the start of 2014 after being sent from the Oakland Athletics to the Boston Red Sox at last year's trade deadline. Boston traded him to Detroit in the offseason.

Cespedes is third among MLB outfielders with 48 extra-base hits this season, with Mike Trout and Bryce Harper ahead of him.

Detroit general manager Dave Dombrowski said he told multiple teams Wednesday afternoon that the Tigers would listen to offers on all their potential free agents before the deadline.

Dombrowski labeled the decision a "rebooting," saying the Tigers have a solid foundation going forward.

Cespedes joins a Mets lineup that is last in the majors in runs scored. Cespedes has hit more home runs this month (eight) than all of the Mets' right-handed hitters combined (six).