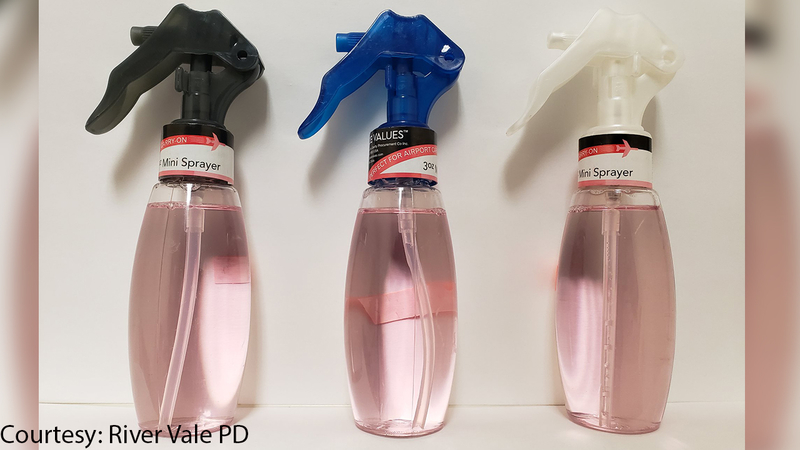 RIVER VALE, New Jersey -- The owner of a 7-Eleven in New Jersey was arrested after a child reportedly suffered severe burns from a "spray sanitizer" product the store was selling, police officials say.

Manisha Bharade of Wood-Ridge was charged with endangering the welfare of a child and deceptive business practices.

River Vale police became of aware of the situation Monday evening after pictures were posted on social media depicting a young boy with apparent burns to his arms and legs.

Officers responded to the store and seized the remaining bottles.

"While further investigation is underway, our first priority is to make the public aware that they should not use this item if they purchased it at the River Vale 7-Eleven," Lieutenant John DeVoe said. "As far as we know, this issue is limited to the River Vale store at this time. From the information that we received, approximately one dozen of the bottles were sold to customers today."

At this point, it is unclear who produced the product, but police believe it was made in-store.

"We have alerted local, county, and state authorities, and our investigation is ongoing at this time," DeVoe said. "Anyone who purchased this item from the River Vale 7-Eleven is asked to contact the River Vale Police Department at 201-664-1111."

It is believed that there are 10 bottles that were previously purchased.

The 10-year-old child was treated and released, and he is expected to make a full recovery. Three children with the boy also bought and used the product, but their burns were less severe and did not require hospitalization.

DeVoe said the store is cooperating with the investigation, and it is not believed there was any malicious intent.

"I think that the parents need to be diligent to make sure that we're using only products that are sanctioned and sold under a consumer product," he said. "The last thing we want to do is to start buying into panic and creating our own type of sanitizers from compounds that we don't know what they contain. That's when the danger occurs. That's when the compounds and mix and have a negative reaction, which is likely what occurred in this scenario."