6abc Look Back: In Philly, Stan Lee shared his thoughts on superhero films

Ahead of ABC's special, 6abc takes look back when Stan Lee visited Philly in 2012
WPVI
By Brock Koller 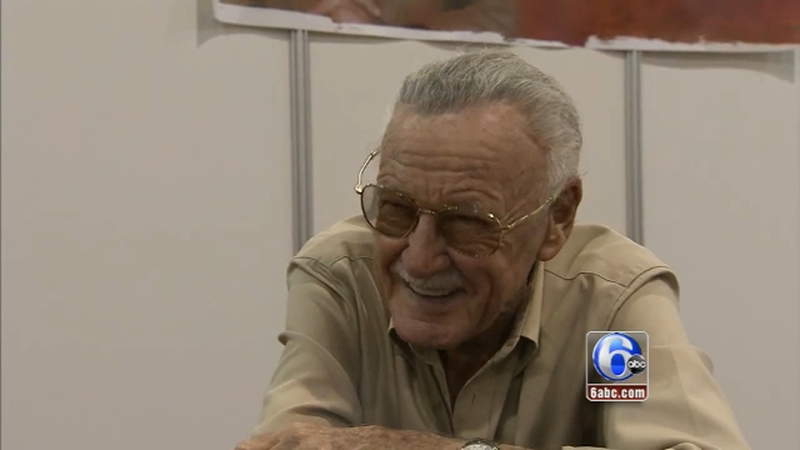 PHILADELPHIA (WPVI) -- Stan Lee was mere months away from turning 90 years old as he sat, smiling and laughing, in a room in the back of the Pennsylvania Convention Center in Philadelphia.

It was June 2012. Superhero fandom was in full force. "Marvel's The Avengers" film had just broken box office records, later to be broken again by its sequels. And Wizard World Philadelphia Comic Con was taking over Center City.

6abc was there to cover the cosplay, the artists, the television and film stars, and all the shenanigans at the Convention Center. But the main attraction of the event was the co-creator of Spider-Man himself.

On Friday night, ABC will be airing a special called "Celebrating Stan Lee." Fans and celebrities from across the Marvel Universe will come together to honor Lee's contributions to the entertainment business.

Fans and celebrities from all over the @Marvel Universe come together to honor a legend. We will be #CelebratingStanLee tonight at 8|7c on ABC. pic.twitter.com/BW3Hz1Ju6y

Back seven years ago, Stan Lee sat down with 6abc to talk about his latest projects, but the interview turned out to be more of a reflection of how he viewed his career and his place in pop culture.

He joked throughout the interview, especially when it came to the success of "The Avengers" and the allure of his superheroes on screen.

"You keep making the same mistake that the general public makes. The allure has to do with my cameo. Everybody wonders about it. In fact, I'll tell you one reason the film has done so well. It's been a secret until now, but I think it's time the public knew. You may notice, my cameo was very brief. You blink your eye, you might have missed it. Many people blinked their eye and missed it. Well, what do they say the minute they're leaving the theater? 'We didn't see Stan's cameo.' They go right to the box office, buy another ticket to make sure they don't miss it again. I figure we sold half as many tickets again because of my cameo. Unfortunately, the producers don't agree with me," he said.

With Lee credited with helping create more than 300 characters including the Incredible Hulk, the Black Panther, the Fantastic Four, and Philadelphia's own Doctor Strange, we asked if he felt responsible for how enormous the comic industry grew over the last decade, especially dealing with the movie business.

Lee, who would pass away in 2018 at age 95, told 6abc he was just "an innocent bystander." He felt it was just a matter of time for superhero films to top the box office, but it had to come together at the right time.

"People wanted to make movies of these superhero comic books many, many years ago. I remember when I moved out to Los Angeles, it was more than 30 years ago, I wasn't out here for more than a couple of weeks, when I met a fellow named Menahem Golan, who was the head of a company called Cannon Films, which at the time was doing 20 movies a year. They were big and turning out a lot of movies. And the first thing he wanted to do was a Spider-Man movie," Lee said.

"Then I met an agent, there was a company called CBS Films. He was an agent who sold the Fantastic Four to CBS Films, but they never went ahead and made the movie," he added.

Lee opined there was one galactic reason it took so long to make the correct kind of superhero films: special effects.

"The reason the movies were never made, nobody could do the special effects. Nobody could do what had to be done. But then, 10 years ago, 15 years ago, the "X-Men" started, "Spider-Man" started. I think it really started with the "Superman" movie where you could believe a man could fly. Then we came out with "Blade" and that was pretty good for what it was."

"And little by little, we realized we now have the ability to do the special effects that were needed. So finally did the right Spider-Man movie, and that worked. There's no stopping us," he said.

Besides being known for his comic book creations, there are certain expressions associated with Lee - including 'Exlcesior!' and 'Face front true believers!'

"A true believer is anyone who has the fortitude to stick with me and read what I'm writing or listen to what I'm saying. He or she has to be a true believer and I have a world of respect for that person's taste in judgment. I got that expression from somewhere. I don't even know where I got it from. I love expressions like 'excelsior,' 'hang loose,' 'face front,' 'nuff said,'" Lee told 6abc in 2012.

"I'm very corny," he joked. "Despite the fact that I'm an intense intellectual, I'm a very corny person."

Join us in #CelebratingStanLee TOMORROW at 8|7c on ABC. pic.twitter.com/6jxJZE6Qxx