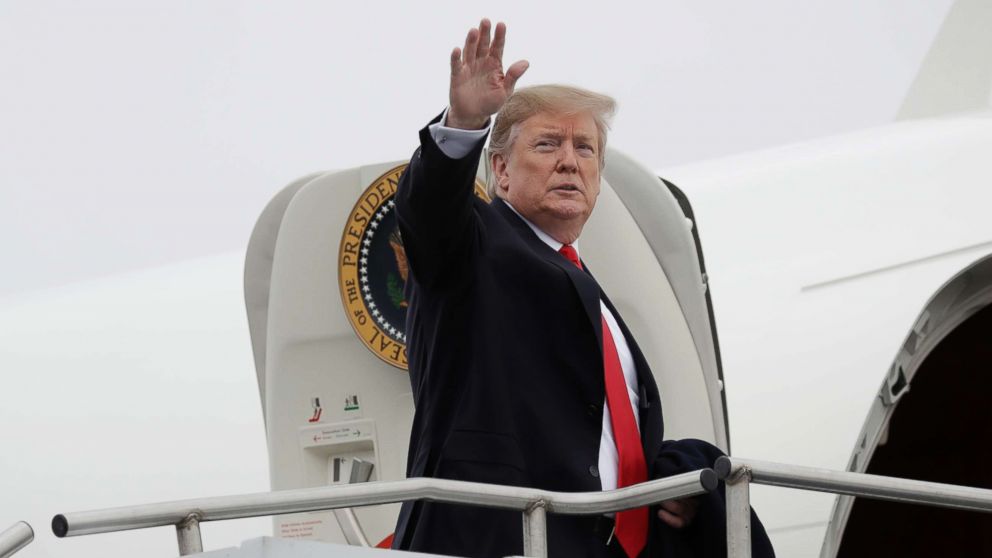 President Donald Trump attacked John McCain again on Wednesday, telling a pro-military crowd in Lima, Ohio, that he "was not a fan" of the late senator.

"I gave him the kind of funeral that he wanted, which, as president, I had to approve," Trump said. "I don't care about this. I didn't get a thank you. That's OK."

Trump's speech was supposed to be a victory lap, touting the revival of a tank factory that nearly closed during the Obama administration, but employees there were largely silent while listening listened to his latest criticisms of McCain, who died last year from brain cancer.

The president declared on Wednesday that ISIS would "be gone by tonight" from Syria, showing reporters and the Lima, Ohio, crowd images he declassified of progress made by U.S.-backed forces.

Military officials haven't indicated when ISIS will cede control over its remaining foothold after months of fighting in Baghouz.

ABC News Foreign Correspondent James Longman, who recently returned from the region, says on "Start Here" that "this is far bigger than just a defeat of a group of people in that tiny, little piece of territory in eastern Syria."

Unsafe drinking water around the world is a bigger crisis than climate change, according to the Environmental Protection Agency.

"My frustration with the current dialogue around environmental issues is that water issues often take a backseat," EPA Administrator Andrew Wheeler said during a speech in Washington. "It's time to change that."

Wheeler told CBS News on Wednesday that the Trump administration is addressing climate change, but that threats from global warming are decades away.

Still haunted by losses in 2000 and 2016, some 2020 Democratic hopefuls are calling for an end to the Electoral College.

Although it wouldn't be an easy change to the Constitution, abolishing the Electoral College has become a major campaign issue for an entire generation of young voters in the Democratic Party, ABC News Deputy Political Director MaryAlice Parks says on "Start Here."

"Twice in their lifetime," Parks says, "a candidate who won the popular vote, the national vote, was not the one that ultimately won the White House."

"Start Here" is the flagship daily news podcast from ABC News -- a straightforward look at the day's top stories in 20 minutes. Listen for free every weekday on Apple Podcasts, Google Podcasts, iHeartRadio, Spotify, Stitcher, TuneIn or the ABC News app. On Amazon Echo, ask Alexa to "Play 'Start Here'" or add the "Start Here" skill to your Flash Briefing. Follow @StartHereABC on Twitter, Facebook and Instagram for exclusive content and show updates.

'When I think about the reaction after shootings in the United States, it has been amazing to see how many people in New Zealand are rallying behind the Prime Minister's push to strengthen the country's gun laws': Jacinda Ardern says the sweeping changes could be approved by parliament within three weeks.

'We categorically deny that Mr. Kraft engaged in any illegal activity': The man who owns the New England Patriots and is accused of paying for sex at a Florida spa probably won't accept a plea deal.

'Very intelligent, friendly and great with children' For the 28th straight year, Labrador retrievers are the most popular good boys and good girls in America.

From our friends at FiveThirtyEight:

The contrarian's guide to picking the Final Four: Tell people you were on the Virginia Tech bandwagon before it was cool.

March is Women's History Month. The other 11 months ... less so.

According to research by Smithsonian magazine, women are vastly underrepresented in history lessons taught in U.S. schools, with one woman mentioned for every three men who are mentioned.

Looking at educational standards from 2017, Smithsonian's analysis went state by state because the U.S. doesn't have universal guidelines for social studies instruction. The magazine's report, which sought to examine how women were included in lessons, found that some women's topics merely were tacked on as an "addendum to the main storyline" or that women were just lumped together in non-representative groups.

According to Census data, on March 20 there were 328,596,714 Americans, more than half of whom were female, with a birth occurring about every eight seconds.