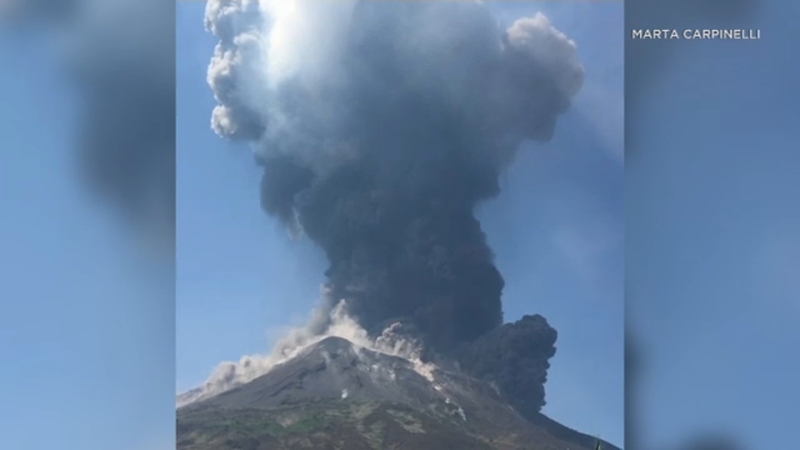 ROME -- A giant explosion from an Italian volcano sent locals and tourists running for cover on Wednesday.

Stromboli, a volcano located on a small island off the coast of Sicily, erupted, sending a gigantic plume of smoke into the sky and sent flaming lava rolling down the volcano's slopes to the edge of the sea.

The National Institute of Geophysics and Volcanology said a similarly spectacular eruption in July on Stromboli killed an Italian hiker.

Aerial footage shows a sprawling lava flow from the Kilauea volcano in Hawaii.

Nineteen-year-old Elena Schiera from Palermo, Sicily, was aboard a sailboat at the time of the eruption.

With her dad at the helm, they made a very quick getaway as the pyroclastic flow began to travel along the water, in the direction of their boat.

Pyroclastic flow is a fast-moving mixture of gas, rock and volcanic ash.

The flow got within a few meters of their boat, but they were able to get away just in time.

There were no immediate reports of injuries. Some small fires were reported near one of the Mediterranean island's hamlets.

Stromboli, population 400, is 135 miles southeast of Naples in the Aeolian archipelago and is one of three active Italian volcanoes.