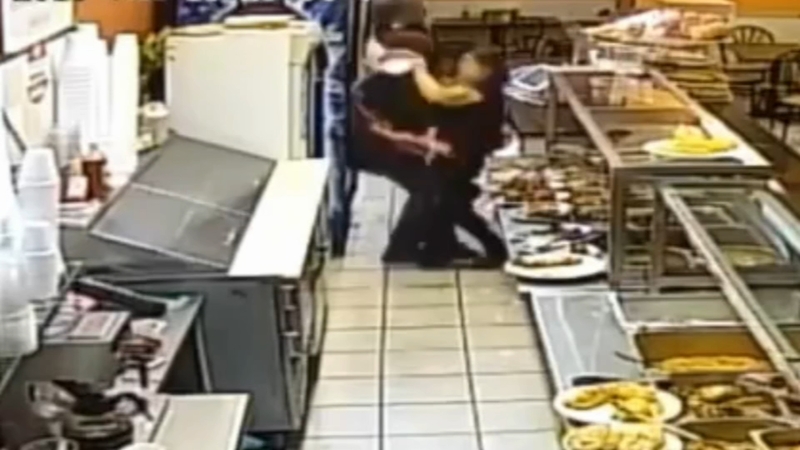 PHILADELPHIA (WPVI) -- Surveillance video of an attempted robbery in Kensington shows an employee who fought back against her attacker, all while she says her young daughter was in the back.

Philadelphia police say it happened Wednesday around 7:30 p.m. when the man entered La Casa Del Buen Gusto, a Dominican and Mexican restaurant in the 600 block of East Allegheny Avenue in Kensington.

Behind the counter was a 42-year-old woman, barely over five feet tall, who fought off the man - and it was all caught on video.

Police say the man had a bag over his hand, leading the victim to believe he was armed. The victim says he demanded money, threatened to kill her and her daughter, and then the two started to struggle. For about a minute they fight, throwing punches.

The woman still has bruises on her arm. She says at one point she threw a metal dish of onions at him. Food is splattered everywhere during the brawl.

Action News spoke to that woman on Friday at the restaurant. She did not want to be identified but says she is fine, and that she was trying to be strong for her daughter.

Customers at La Casa Del Buen Gusto know this woman well, and say they were shocked at the video, and are also glad she's okay.

Police say the suspect eventually fled without taking anything.