WPVI
By 6abc Digital Staff
PHILADELPHIA (WPVI) -- Philadelphia police have identified one of the two suspects being sought after shots were fired at officers on Friday night in the West Oak Lane section of the city.

Jeffione Thomas, 28, with a last known address in the 7800 block of Fayette Street, is wanted for attempted murder, police said Saturday. 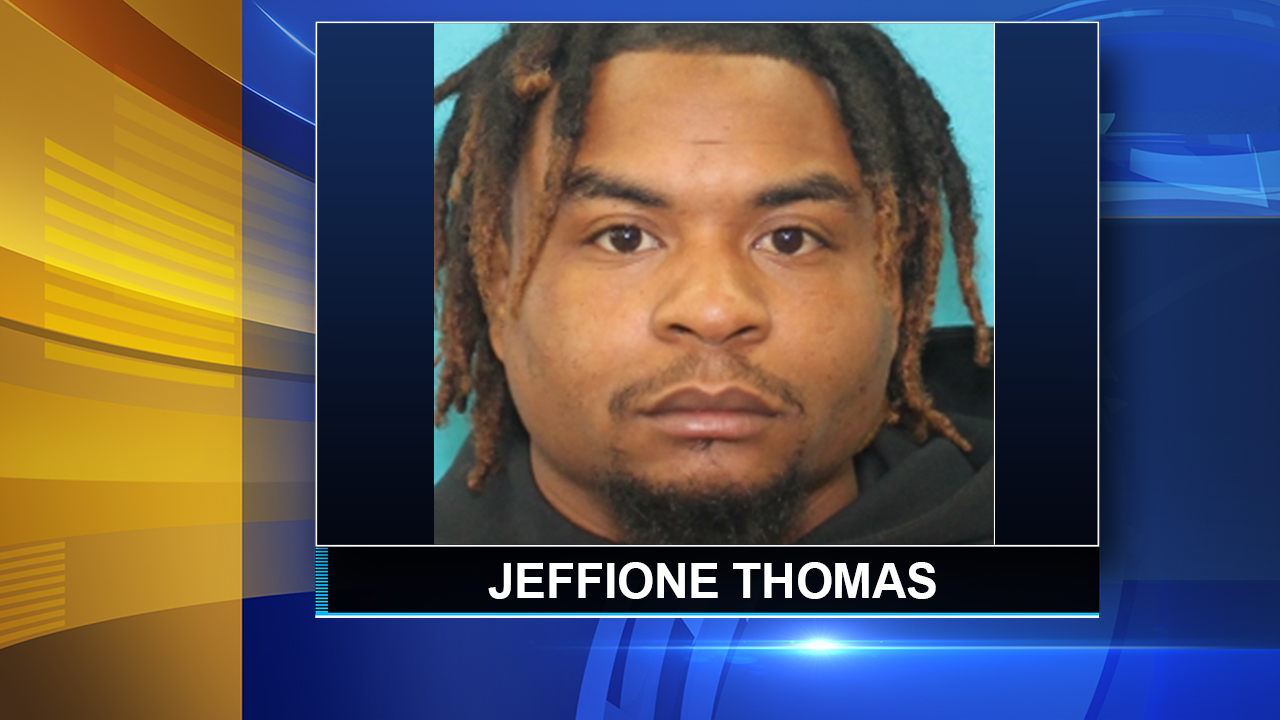 He is described as a Black male standing 5'7" tall and weighing 180 pounds.

Anyone with information on his whereabouts is asked to contact police.

Shots were fired at three plainclothes officers just after 8 p.m. Friday on the 1400 block of Sharpnack Street.
Officials say the officers were traveling in an unmarked police vehicle when a man on a bicycle, identified as Thomas, was riding by their driver's side window.

One of the officers rolled down his window to ask the man if he was okay.

Officials say Thomas then produced a gun and began firing shots at the officers.

The officers pulled off east on Sharpnack Street, past the intersection of 7700 Fayette Street, where the vehicle went up on the sidewalk and hit a fence.

Their vehicle was struck several times by the gunfire. The officers then got out of their vehicle and returned fire.

A second male shooter began firing towards the officers from further down Sharpnack Street, placing the officers in a crossfire.

Police are looking for at least two gunmen who fired shots at three plainclothes officers in the West Oak Lane section of Philadelphia.

The male officer who was driving was struck in his back by a bullet that penetrated their vehicle and the driver's seat.

However, the bullet was stopped by the officer's vest.

He was transported to Einstein Medical Center for treatment listed in stable condition.

"These bullets don't got no names on them. It could've hit anybody's house," said Troy Thomas, who got a call from his wife when she heard gunshots.

"She was on the floor and my daughter ducked down on the floor. She said it was like 'pow.' And then 'pow pow pow pow,'" he said.

One female officer, who was seated as the rear seat passenger, sustained cuts to her left leg. She was also transported to Einstein Medical Center for treatment and was listed in stable condition.

The male front seat passenger was not injured in the incident. Both shooters fled in unknown directions, officials say.

It wasn't clear what sparked the shooting or if either shooter knew the people in the vehicle were officers.

The Philadelphia Fraternal Order of Police Lodge 5 is offering a $10,000 reward for any information leading to the arrest of suspects.