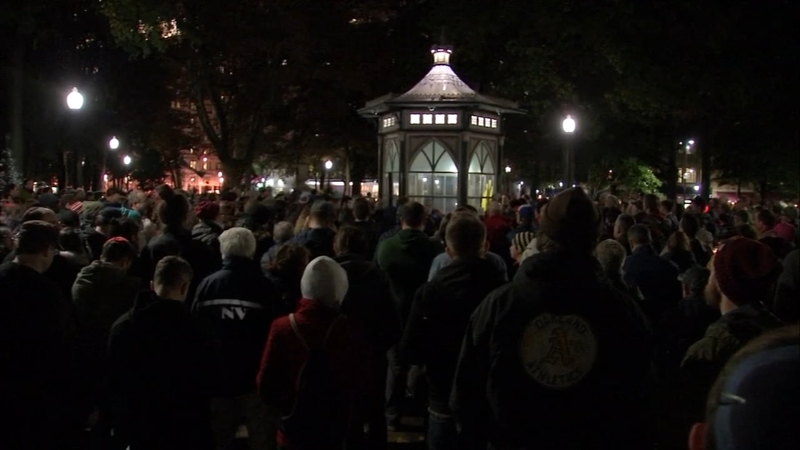 PHILADELPHIA (WPVI) -- Police were increasing security at houses of worship in and around Philadelphia following the synagogue shooting in Pittsburgh that left 11 people dead.

In Cheltenham, police were protecting the congregation at Beth Shalom synagogue on Saturday evening.

11 dead in shooting at Pittsburgh synagogue. Bob Brooks reports during Action News at 7pm on October 27, 2018.

"This could've happened here at this synagogue or any place in the country. It hits close to home, but no matter where it is, it's close to home," said Harvey Friedrich, executive director of Beth Shalom.

The Jewish community concluding Shabbat services with heavy hearts after the attack at the Tree of Life congregation.

"My sister-in-law was the immediate past president of that synagogue, my nephew was bar mitzfahed there not too long ago," said Kim Decker. "It's really, really horrible."

Chopper video from scene of Pittsburgh synagogue shooting on October 27, 2018

At Beth Shalom, each member of the congregation has an assigned key card to gain access to the building.

"We're a house of worship, we want to be open and accessible and welcoming to our community, so we have to balance the need to be open versus the need to protect people," said Friedrick.

As details about the murders emerge, the mourning process is beginning around the world.

"In the Jewish tradition, we say to mourners, that we pray that the divine comforts them among all the mourners of the Jewish people and of all inhabitants of the earth," said Rabbi Deborah Glanzberg-Krainin of the Jewish Federation of Greater Philadelphia.

The Philadelphia police department said it is also taking precautions.

As we continue to monitor the situation in Pittsburgh, we are sending officers to Synagogues and other houses of worship across the city. We are not aware of any current threats to Philadelphia - but as always - encourage folks to dial 911 with any suspicious information.

In a statement, the department said it is monitoring the current situation and is not aware of any threats in Philadelphia.

However, officers were sent to synagogues and other houses of worship across the city.

Police encourage everyone to call 911 if they see something suspicious.

In the Rittenhouse Square section of Philadelphia, people gathered Saturday night for a vigil to honor those who were killed.

"Everyone saying that prayer together, a huge group of people, was a profound way to remember everyone who was lost today," said Elijah Tomaszewski of West Philadelphia.

"We can't let this happen to Jews, to transgender, to black and brown people. We have to stand up and be together and be strong," said Marcy Boroff of Mount Airy.

A sense of community with the faithful gathering together, while their sense of safety is shaken.

"When I walk away from this sort of thing, I feel a connection to people even though we all feel terrible and numb," said Tomaszewski.