The business had been a bright spot for many in the community who missed the charming teahouse and gift shop.
WPVI
By TaRhonda Thomas and 6abc Digital Staff 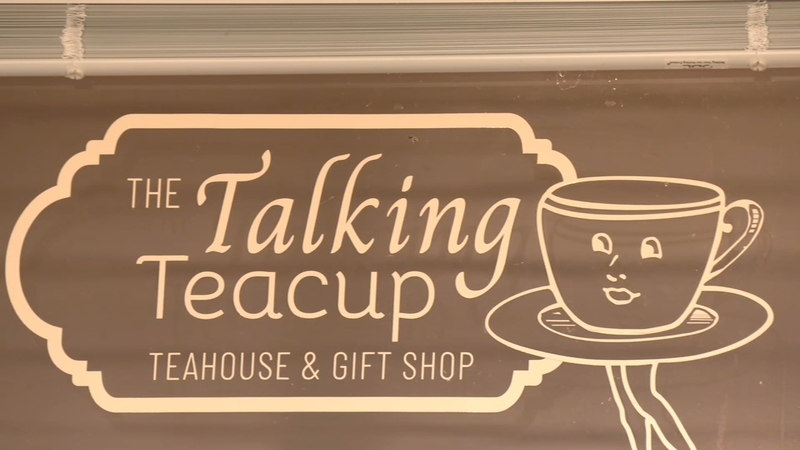 CHALFONT, Pennsylvania (WPVI) -- In a two-story house along West Butler Avenue in Chalfont, Bucks County, streams of people gathered to support a local tea business that has been closed for two years.

"I was pinching myself last week," said owner Patti Fitzpatrick of the Talking Tea Cup.

The business had been a bright spot for many in the community who missed the charming teahouse and gift shop.

"This place was empty for two years, and it was gutted," said Fitzpatrick.

Fitzpatrick and her business partner Nicole Boyer have more than made up for that lost time.

The teahouse offers several traditional tea items, including a wide selection of teas, scones, sandwiches, and other items.

It's all served in an atmosphere that was created to feel like home.

"We wanted everybody to feel like they're coming to Grandmom's house," said Fitzpatrick.

But this story isn't just about tea. It's actually about a friendship that began with a cup of tea.

Fitzpatrick was a customer when she met Kathy Heck, the original owner of The Talking Teacup.

"Kathy and I started talking. Then we became friends," she said.

They developed a friendship that would last a lifetime, but unfortunately, Heck's lifetime didn't last as long as they'd hoped.

"She had terminal cancer," Fitzpatrick said.

Kathy died in 2019 of ovarian cancer. She'd already closed the teahouse as she sought to simplify things after her diagnosis. But the teahouse wouldn't stay closed, thanks to a letter Heck wrote Fitzpatrick urging her to never give up on her dream and some encouragement that caught Fitzpatrick's attention as she mourned her friend.

"There was a nudge," Fitzpatrick said. "Like somebody kept saying, 'Go for it!'"

So she decided to take a chance and try to reopen The Talking Teacup but knew she couldn't do it alone.

That's when she talked to Boyer about her idea.

Even with no experience running a business, they did everything to get the Talking Teacup reopened.

That even included remodeling the building, which Heck wanted to eventually make her home.

The new business duo also remodeled the teahouse with touches that they think Kathy would have loved.

"She loved that wallpaper that you see in those little caved-in windows," Fitzpatrick said.

It didn't take long for word to spread that the teahouse was reopening.

"It's just been off the wall," said Fitzpatrick.

Fitzgerald and Boyer say they are happy to bring back the opportunity to bond with friends and family over tea after so many people have spent time apart during the COVID-19 pandemic.

"It's just beaming from them," Boyer said of customers' smiles. "That's the wonderful experience we want everyone to have."