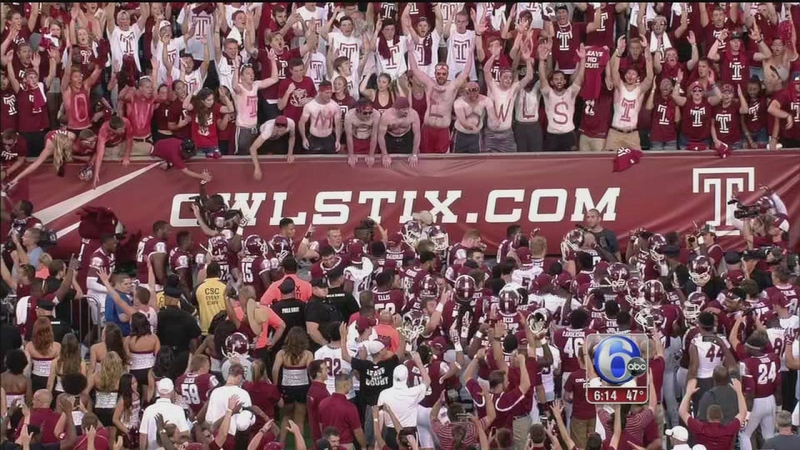 NORTH PHILADELPHIA (WPVI) -- Temple University may not get its much-longed for football stadium in North Philadelphia. The school's board of trustees tabled a vote on whether to build the Owls their own arena.

Kenney says Temple would likely not feel the need to build its own stadium if the Eagles made Lincoln financial Field an equitable home field for the Owls.

Kenney explains, "I think that a much better economic relationship between the Eagles and Temple would forgo the need for a new stadium. Because from what I understand down there, the prices are outrageous, they don't share in the pricing or the parking or the concessions. They pay a large amount of money for every single game."

But rest assured this issue is far from over.

Temple's football program is getting a lot of attention these days. In the wake of a 10 win season, an appearance in the AAC championship game, and a bowl bid, there is now a serious discussion about possibly building Temple its own football stadium.

The proposal, at least for now, calls for the stadium to be built just north of the Liacourus Center. And school officials tell us the structure would likely be more than just a sports arena.

Ray Betzner is Temple's Vice President of Communications. He tells us, "Let's talk about retail for this location. What kind of retail would go well with a stadium on this site, and retail that would not only benefit the Temple University community, but the North Philadelphia community as well."

But some in the neighboring community do not see it the same way. Protesters gathered outside Tuesday's meeting of the board of trustees saying the $100 million it would cost to build a stadium should be used to raise wages for Temple employees, and to reach out to the communities nearby.

One of the protesters, Zoe Buckwalter, says, "There's no outreach from board members or the president to the community other than occasional little cleanup projects. But in terms of the way Temple functions systematically, there's really no respect or regard for poor people in the community."

Kenneth Johnson says he lives near the property where the proposed stadium would be built. He says it feels like the school is riding the football team's wave of popularity to force its agenda.

Johnson tells us, "I guess now they figure in the year 2015, it's their year to just push push, push. But you know, the citizens and taxpayers as well as the students, we need to start pushing back as well."