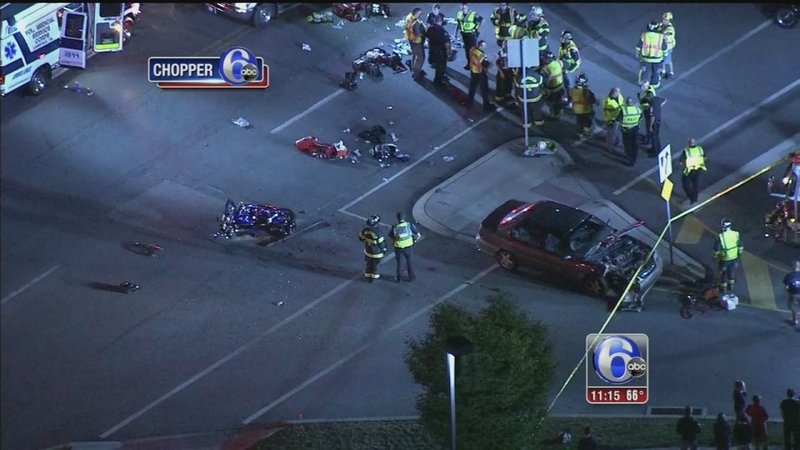 TOWAMENCIN TWP., Pa. (WPVI) -- One person was seriously injured and another was killed after a motorcycle collided with a car in Montgomery County Wednesday night.

The crash was reported just before 9:30 p.m. in the 200 block of Forty Foot Road in Towamencin Township.

Investigators said a Chevrolet sedan with two occupants was traveling northbound when it collided, while attempting a left turn, with a Harley Davidson motorcycle with two riders traveling southbound.

The driver of the motorcycle was identified as 50-year-old Armand Devoe Jr. of Harleysville, Pa., and the passenger as 49-year-old Victoria Ziegler of Way Souderton, Pa.

Both victims were airlifted to the University of Pennsylvania Hospital. Devoe is in critical condition. Ziegler was later pronounced dead Thursday at 1:04 a.m.

Police identified the driver of the sedan as 19-year-old Clayton Landis of Harleysville, Pa., and the passenger as a 17-year-old-female juvenile.

Neither occupant of the Chevrolet was injured.

Forty Foot Road was closed for around four hours while police investigated.

Anyone with any information can contact the Towamencin Township Police Department at 215-368-7606 or the Montgomery County District Attorney's Office at 610-278-3368.