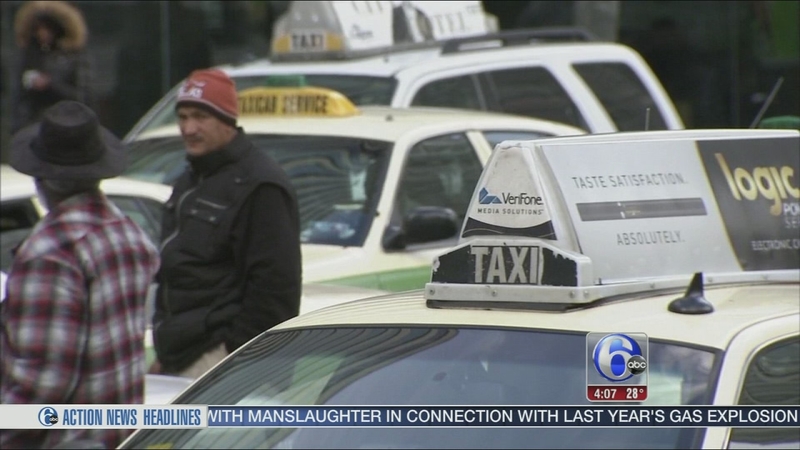 The number of drivers has swelled and cabs are parked all around City Hall. The protest is peaceful. pic.twitter.com/jZVWJnENwr

SEPTA Police Chief Thomas Nestel said, "The number of drivers has swelled and cabs are parked all around City Hall. The protest is peaceful."

Traffic was a standstill around City Hall as protesters demanded to have a chance to speak with Mayor Jim Kenney.

A member of the mayor's team did come out to speak with protesters and told them "we understand your concerns."

Mayor Kenney gave his thoughts on the issue, as well.

"Certainly people have a right to express their views and they're concerned about their economics and how the competition is affecting it and how the Parking Authority is approaching both Uber or Uber X. There's a whole slew of things that are going on that we need to sift through, some of them we don't control,"

Philadelphia has shown tremendous demand for more affordable options like UberX, and the Mayor as well as the City Council have expressed their support for ridesharing. At the same time, the taxi industry has resisted competition and innovation at every turn, even going so far as working with the PPA to make sure Philadelphia is excluded from the regulations that currently govern uberX in 66 out of 67 counties in Pennsylvania.

By partnering with paratransit services, Uber has helped make accessible transit work in Philadelphia. Riders with disabilities can get a ride in minutes through Uber, while they're often left stranded by taxi services. Although we are always looking for new ways to better serve all individuals who are disabled, Uber has in fact been praised by the author of the Americans with Disabilities Act (ADA) for increasing the mobility and freedom of drivers and riders with disabilities.

Back in December 2015, seen in videos below, protesters with the Taxi Workers Alliance and the Philadelphia Limo Association lined the streets for a similar protest.

The protesters wanted to shut down Uber X and Lyft drivers who they said were operating illegally in the city.

One of those taxi drivers, Jamal Brown, in December's protest said, "We can't advertise in our taxi to make a couple extra dollars. We can't do a lot of things in our taxis to increase our earnings because of the Parking Authority's regulation. Meanwhile, they're not regulating Uber and Uber X and Lyft."

A driver was detained and ticketed by Philadelphia Police during Wednesday's protest in Center City.

At the time, Ali Razak from the Philadelphia Limo Association said, "There's 12,000 illegal drivers. There's numerous crimes happening every day. Everybody's aware of that, but everybody wants to point their finger and say 'Oh, I don't know anything about it.' Somebody needs to take responsibility."

The protesters said they felt ignored and overlooked by the city. They want to see the Philadelphia Parking Authority do more, but admit it would be difficult.

Ronald Blount, the president of the Taxi Workers Alliance of Philadelphia, told Action News in December, "The Philadelphia Parking Authority, they've done the best they can. They only have eight enforcement inspectors going against thousands of illegal Uber X in the city. So, they need help."

Several taxicabs were ordered towed from the scene of a protest in Center City Philadelphia.

In regards to December's protest, a spokesperson for Uber released the following statement:

"Many taxi and limousine drivers are understandably frustrated because the Philadelphia Parking Authority's outdated rules make it harder to earn a living when the public has shown they want more affordable options. Each year, the PPA requires limousine drivers to pay $404 per vehicle for a PPA sticker and $130 for their chauffeur's permit to be renewed. They also subject drivers to obsolete vehicle restrictions and onerous insurance requirements. We believe statewide reform of the PPA that allows for regulated ridesharing will benefit both riders and drivers."

Action News spoke with a representative from the Philadelphia Parking Authority who says the agency conducts regular stings to go after the illegal ride-sharing operations, and the agency says those stings will continue.
Related topics:
trafficcenter city philadelphiaprotestphilly newstaxi driversuber
Copyright © 2021 WPVI-TV. All Rights Reserved.
RELATED 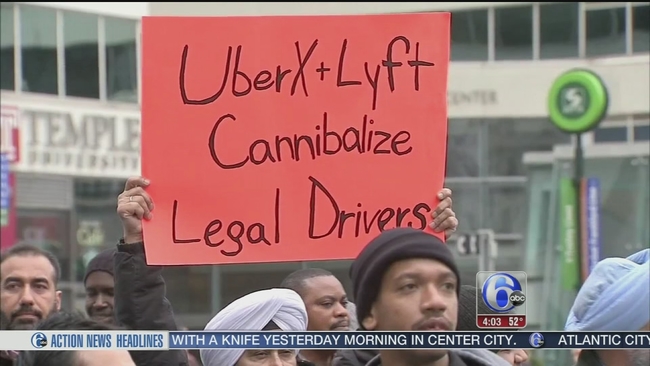