New technology that could change transit in Philadelphia 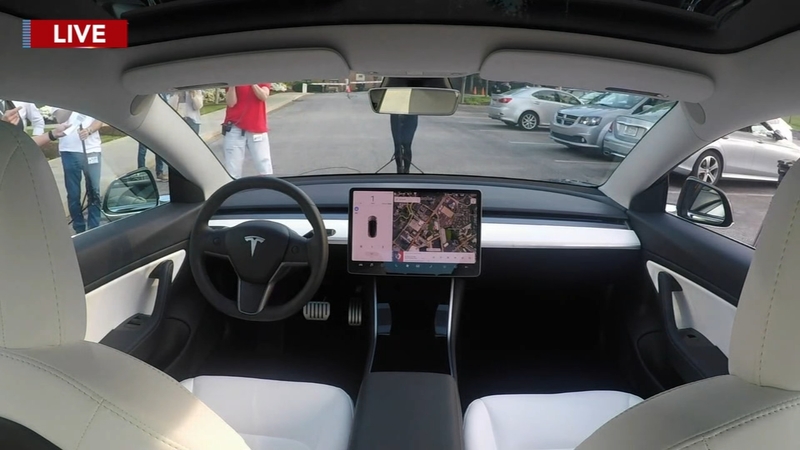 Technology that could change transit in Philadelphia

PHILADELPHIA (WPVI) -- We looked ahead to the future and found all kinds of fascinating new technology that could one day make your commute faster, safer, and even stress-free.

The future of transportation seems like something straight from "The Jetsons".

Autonomous cars are just up the road. Billionaire investor Elon Musk has a bold timeline for Tesla.

"All Tesla cars being produced right now have everything necessary for full self-driving. All you need to do is improve the software," Musk said. "I'd say like probably two years from now we make a car that has no steering wheel or pedals."

Musk pushed his timeline even further.

"This is an important milestone. It's the first 12 meter bus that can operate electric, full autonomous without human intervention on the road," said Hackman Agnevall, the President of the Volvo Bus Company.

NEXT Future Transportation Inc. is a company developing self-driving pods that can join and detach and arrive on demand. Former New York City Traffic commissioner Sam Schwartz is the author of "No One at the Wheel - Driverless Cars and the Road of the Future." He thinks autonomous mass transit is the way of the future.

And then there's hyperloop.

"It can go as fast as a plane but we strive to have the ease of a metro system," said Ryan Kelly of Virgin Hyperloop One.

Virgin, the airline company, is testing Hyperloop One: a system that would put passengers in pods and hurtle them at lightning fast speeds, think 600 miles per hour, through vacuum tubes.

"Kansas City to St. Louis right now takes about 3 1/2 to about 4 1/2 hours. We can actually, with a hyperloop, go from city center to city center in 22 minutes," Kelly said.

Virgin said nations like India have already committed to construction.

But what if you didn't have to travel on the ground, tech companies are working on transportation ideas that operate in the air.

Uber is developing a flying taxi expected to start operating around 2025. The company Volocopters is already testing autonomous flying taxis in Dubai.

"We want to demonstrate how it can be implemented in the traffic context of a big city. The initial step will be a point-to-point route. For example, going from the airport to the city center, which comes along with minimal infrastructure requirement and very low capital risk," said Florian Reuter of Volocopter.

But why wait? A company called Pal-V is already selling a flying car to take you on your commute in the air and on the ground, making congestion a worry of the past. The possibilities are endless.

"There's no way of knowing what we're gonna see in the second half of this century. But it's gonna be - we should expect it to be dramatically different than what we know today," Schwartz said.

Of course, vehicles of the future need to get to an affordable price point for everyone.

And with all these new ideas, there's a lot that needs to happen before they can become reality. This all takes money, commitment and regulation.

While no car can prevent all accidents, we work every day to make them less likely to occur. The massive amount of real-world data gathered from our cars' eight cameras, 12 ultrasonic sensors, and forward-facing radar, coupled with billions of miles of inputs from real drivers, helps us better understand the patterns to watch out for in the moments before a crash.

As our quarterly safety reports have shown, drivers using Autopilot register fewer accidents per mile than those driving without it. That's because Autopilot is designed to reduce fatigue by helping drivers stay in their lane, while also ensuring that they keep their hands on the wheel. While lane-keeping and hands-on monitoring can be extremely effective at helping to reduce the likelihood of an accident when Autopilot is in use, we believe that these precautions can also be extremely effective for preventing accidents when Autopilot is not in use.

Lane Departure Avoidance lets a driver elect to have corrective steering applied in order to keep them in their intended lane. When the feature is in use and a driver is departing a lane without their turn signal on, the car will also check to see whether a driver's hands are on the wheel. If a driver's hands are not detected on the wheel, the driver will receive a series of hands-on reminders and alerts, similar to the ones that our cars provide to customers who use Autopilot. If a driver's hands are repeatedly not detected on the wheel when Traffic Aware Cruise Control is in use, their car will gradually slow down to 15 miles below the speed limit or below the car's set speed and turn its hazard lights on.

This feature can be turned on or off, and works at speeds between 25 and 90 mph. It is an extension of Lane Departure Warning, which already warns drivers through a steering wheel vibration if they begin to drift out of their lane without their turn signal engaged.

Emergency Lane Departure Avoidance is designed to steer a Tesla vehicle back into the driving lane if our system detects that it is departing its lane and there could be a collision, or if the car is close to the edge of the road. This feature will automatically be enabled at the beginning of every drive, but can be turned off for a single drive by going to the Autopilot Controls menu.

At Tesla, improving safety is our primary goal, even after a customer purchases their car. That's why we're introducing these features beginning today via a free over-the-air software update, starting with Model 3 owners and gradually expanding to all cars that were built after October 2016. This is just another way that we are helping to protect Tesla drivers and passengers, and others on the road, every day.